Mariprofundus ferrooxydans is a marine iron-oxidizing bacteria and is the sole member of the Zetaproteobacteria class. M. ferrooxydans are a C-shaped, motile, gram negative bacteria which exude stalks for the excretion iron oxides. [1]

M. ferooxydans was first discovered at the hydrothermal vents at Loihi Seamount, Hawaii. At that location, the temperature is low, iron is abundant, and microbial mats of iron oxides surround the seamount. [2]

M. ferrooxydans obtains energy from oxidizing Fe(II) and obtains carbon from CO2, designating this bacteria as a chemolithoautotroph. Growth has been observed at temperatures from 5° to 30°C, with 23°C being the optimal temperature, classifying this organism as a mesophile. This bacteria is neutrophilic with an optimal pH range of 6.2-6.5, though growth has been observed at a pH range of 5.5-7.2. [3]

M. ferrooxydans has a single circular chromosome.
After the 16S rRNA gene analysis of M. ferrooxydans revealed that it is unlike any other class of proteobacteria, Zetaproteobacteria has been accepted as an additional class. Genomic data from [2] was collected using the M. ferrooxydans PV-1 strain, with a genome size of 2,867,087 bp and a G+C content of 54%. Within the PV-1 genome, 6 phage integrases along with 21 transposases were identified, thus lateral gene transfer is a potential mechanism for the organism's unique genome. [2.]

Cell Structure
During cell growth, Mariprofundus ferrooxydans forms stalks that are used for the excretion and extracellular storage of oxidized iron. Iron oxyhydroxides along with carboxyl-rich polysaccharides are the main components of the stalks and it is thought that these components are bound together upon excretion from the cell. The stalks may have a key role in cell survival by controlling mineral growth, thus preventing enclosure of the cell solid iron minerals. [1]


Metabolism
M. ferrooxydans gains energy by oxidizing reduced iron (Fe(II)) in the presence of oxygen, resulting in the formation of iron oxides (rust). Reduced iron serves as the electron donor and can be oxidized from several compounds, including FeS, FeCO3, FeCl2, Fe(NH4)2(SO4)2, FeSO4, and Fe(0) [3].


Life Cycle
This bacteria has two stages in its cell cycle and alternates between them. In one stage, the cells possess flagella and are highly motile until conditions allowing for iron oxidation are found. Once these conditions are located, the cells switch to the second stage that is considered to be the growth stage. In the growth stage, the cells shed their flagella and begin stalk formation. During cell division, the stalk is split into a Y shape, in which the two cells are attached to opposing ends of the stalk. Finally, the stalk is divided into two pieces of equal lengths, allowing each cell to acquire half of the stalk. Growth of the stalk is continued until the conditions required for iron oxidation are no longer sustained. This unfavorable change results in the cells to shed their stalks and re-enter the motile stage, where the process starts over. [1,2] 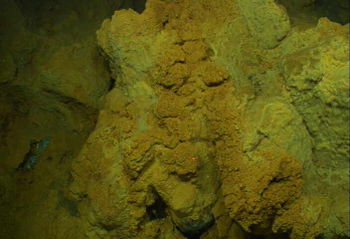 Ecology
The conditions that M. ferrooxydans requires for growth and iron oxidation are found in several oceanic habitats. One of these habitats is located near a hydrothermal vent, at a distance where the heated iron-rich vent fluids are dissipated into the sea water. Here, iron oxidizing bacteria, such as M. ferrooxydans, form iron-oxide microbial mats on the sea floor. These microbial mats are covered with iron oxides (rust) excreted by the cells. [2]


M. ferrooxydans can also be found in habitats where Fe(II) leaching occurs from underwater volcanic rocks, which makes it possible for iron-oxidizing bacteria to form biofilms on the rocks. [3]


Although this bacteria is an obligate iron oxidizer, it has been cultivated on the surface of electrodes in the absence of Fe(II), during which the cells divided successfully but did not excrete stalks. [4]