Mason Pfizer Monkey virus (MPMV) is a simian retrovirus (SRV), as well as the most thoroughly understood of the D-type Betaretrovirus. MPMV is the prototype for the D-type retroviruses. The fundamental assembly steps (gag particle formation, transport to the membrane, membrane interaction/viral budding, and viral release) are separate sequential processes allowing this virus to serve as an important model of retroviral assembly (Parker and Hunter, 2001). MPMV was first observed by Harish C. Chopra and Marcus M. Mason in 1970 from a spontaneous breast adenocarcinoma in an 8-year old rhesus monkey (Macaca mulatta) that had been in estrus for approximately one year (Chopra and Mason, 1970). MPMV has properties similar to the C-type and B-type viruses but is morphologically distinct (Fine and Schochetman, 1978), which initially designated the virus into the genus Oncornavirus D. However, after further characterization of the virus, the recent taxonomic genus classification has been changed to Betaretrovirus. MPMV is distinguished by accumulation of A-type intracellular particles in the cytoplasm and budding release to acquire viral protease activity. MPMV is pathogenic in Old World monkeys, Family Cercopithecidae (Fine and Schochetman, 1978) and causes immunodeficiency syndrome (Bohl et al., 2005) and tumors (De las Heras et al., 1991).

MPMV genome is dimeric, not segmented, and consists of a single molecule of linear, positive-sense, single-stranded RNA. The genome has been fully sequenced and the complete genome is of one monomer of 8,557 nucleotides in length. The genome has terminally redundant sequences that have long terminal repeats (LTR) of about 350 nucleotides. The 5'–end of the genome has a methylated nucleotide cap; cap sequence is of type 1 m7G5ppp5'GmpNp. The 3'–terminus of each monomer has a poly (A) tract, a tRNA–like structure, and accepts lysin. - ICTVdB - The Universal Virus Database, version 4.

MPMV consists of an envelope, a nucleocapsid, and a nucleoid. Virus capsid (core) is enveloped. Proteins constitute about 60% of the particle weight. The viral genome encodes structural proteins and non-structural proteins, in which the non-structural proteins code for an RNA-dependent DNA polymerase. Lipids are present and located in the envelope, and the virus is composed of 35% lipids by weight. The composition of viral lipids and host cell membranes are similar. The lipids are of host origin and are derived from plasma membranes - ICTVdB - The Universal Virus Database, version 4..

With direct hybridization of radioactive MPMV 70S RNA to DNA of various animal species, it has been shown that a portion(approximately 20%) of the MPMV genome was present in the cellular DNA of several Old World monkeys of the subfamily Cercopithecinae. No sequence homology was observed between MPMV and the cellular DNA's of New World monkeys, apes (including man), and several non-primates (Fine and Schochetman, 1978) indicating pathogenicity of MPMV occurs only in Old World monkeys.

By itself, genomic nucleic acid of MPMV is not infectious. Viral protease activity is strictly limited to the completion of the viral budding process (Parker and Hunter, 2001).

Reverse transcriptases (RTs) catalyze the conversion of single-stranded RNA into double-stranded viral DNA for integration into host chromosomes. Proteins in this subfamily contain long terminal repeats (LTRs) and are multifunctional enzymes with RNA-directed DNA polymerase, DNA directed DNA polymerase, and ribonuclease hybrid (RNase H) activities. The viral RNA genome enters the cytoplasm as part of a nucleoprotein complex, and the process of reverse transcription generates in the cytoplasm forming a linear DNA duplex via an intricate series of steps. This duplex DNA is collinear with its RNA template, but contains terminal duplications known as LTRs that are not present in viral RNA. It has been proposed that two specialized template switches, known as strand-transfer reactions or "jumps", are required to generate the LTRs - (Huang et al., 1998).

Infection by retroviruses is associated with immune cell dysfunction. MPMV induces a fatal immunodeficiency syndrome in rhesus macaques (Conte et al., 1997). Newborn rhesus monkeys experimentally inoculated with MPMV developed a wasting disease within a few weeks accompanied by opportunistic infections including pneumonia, enteritis and rashes. Macaques naturally infected in primate centers and zoos die from opportunistic infections. While the virus was widespread, post-mortem examination revealed only lymphadenopathy and thymic atrophy. The opportunistic infections as a thymic target supports the virus exerts a T-cell immunosuppressive effect, as has been suggested for other D-type retroviruses (Fine et al., 1975.)

The MPMV envelope has been shown to have an immunosuppressive effect in vivo by using an assay involving rejection of tumor cells in immuno-competent mice. The experimental results also support an initiation of T-cell response with MPMV infection. The immunosuppressive properties of MPMV does not function based solely on a well conserved domain of 17 amino acids located within the transmembrane subunit of retroviral envelopes, but several domains within the envelope protein, and may be dependent on the overall structure of the protein (Blaise et al., 2001).

MPMV is an important model to study human disease, and can be used experimentally as a tool to find potential inhibitors of HIV immature particle assembly. In an experiment by Sakalian and coworkers (2002), Assembly of HIV gag was enabled with regions of MPMV gag inserted into the HIV gag to create chimeric gag molecules. These chimeras were capable of assembly into immature capsid-like structures in vitro. Chimeric species containing large regions of MPMV gag fused to HIV gag failed to assemble. Species consisting of only the MPMV p12 region and its internal scaffold domain (ISD) fused to HIV gag were capable of assembly, however at reduced kinetics compared to the MPMV gag. The ISDs ability to induce assembly of the HIV gag in the plasma membrane, proposes a common requirement for a concentrating factor in retrovirus assembly. The function of the HIV gag domain remained essential, as confirmed by an assembly-defective mutant of HIV CA, M185A, that abolished assembly when introduced into the chimera. The continued requirement for HIV gag domain function in the assembly of chimeric molecules will allow in vitro systems to be used for analysis of potential inhibitors of HIV immature particle assembly (Sakalian et al., 2002). 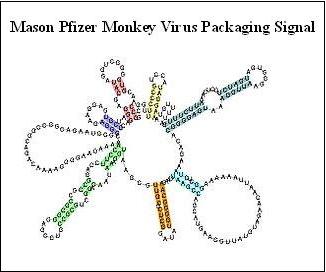 MPMV is also an effective tool for gene therapy. Novel vectors are capable of producing MPMV proteins but not packaging MPMV RNA, and the information about the packaging signal in MPMV and HIV can be used to create MPMV and HIV vectors that are capable of transferring foreign genes (Lever and Hunter, 2002). Mason-Pfizer monkey virus packaging signal is a regulatory element located in the 5' UTR and is required for specific RNA encapsidation (Mustafa et al., 2004, Harrison et al., 1995).

Correct intracellular targeting of the gag to the nuclear compartment is a fundamental step in the retroviral life cycle. In an experiment by Bohl and coworkers(2005) the specific KKPKR motif of the gag protein was identified. The KKPKR is a region of basic residues within the NP24 domain. The NP24 domain is highly conserved among the phosphoproteins of various Betaretroviruses and play an important role in RNA packaging. Results of the experiment showed the KKPKR motif is required for virus replication. This finding was supported by experiments in which the KKPKR motif was deleted, and reduced viral RNA packaging 6-8 fold was observed. The deletion of this domain also affected the transient association of gag with nuclear pores (Bohl et al., 2005). Similarities in retroviral life cycle of the MPMV to diseases such as acquired immunodeficiency syndrome in humans enables MPMV to participate as a vital animal model to provides a way to test mechanisms and functions to improve human health.

Parker, S.D., Hunter, E. 2001. Activation of the Mason-Pfizer monkey virus protease within immature capsids in vitro. Proceedings of the National Academy of Sciences of the United States of America. 98:14631-14636.

Edited by student of Emily Lilly at University of Massachusetts Dartmouth.