Obesity is one of the foremost serious health problems in the United States and with a long list of causations and associate conditions; it is crucial to identify influencing factors. More and more research is being directed towards the affects of the complex system of microbes that live in the guts of all humans and the potential effects of specific bacteria on metabolic pathways. There have been many correlations drawn between the composition of individuals’ gut microbiota and conditions such as Fatty Liver Disease and Steatohepatitis both directly related with obesity, however there has only recently (ie. 2014) been growing research done on what specific genus and species of bacteria are involved in the complex symbiotic pathways that lead to the development of these metabolic disorders. Bacteria in the phylogenetic classes [2] and [3] have been shown to be directly correlated to metabolic disorders 1. 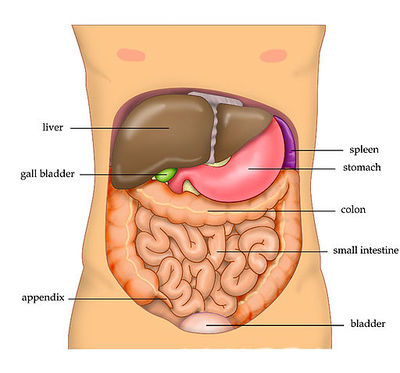 Function of Gut Microbiota in Animals

It is thought that microbes and animals developed symbiotically over evolutionary time, specifically microbes found in the digestive systems of animals that produced valuable metabolites for the animal. It is through this interaction that we see microbes found in the gut of animals are inherently linked to that animal's metabolic systems 6. Due to this linkage there is a direct correlation between any observed metabolic phenotypes in animals and the bacteria that are present in that animal's gut.

There is currently a great deal of research being dedicated to understanding the exact ways that animal metabolic disorders are connected to the human gut microbiota however there is still a great deal unknown about the specific ways that bacteria found in the human digestive system influence metabolic processes throughout the body. What is known, is that an individuals gut microbiota is significantly determined by what an individual was born with, majorly dependent on their mother 7, and because of the uniqueness of each individuals microbiota we see a diversity of disorders and intensity of those disorders depending on the individual. Crucial to building a firmer understand of how the human microbiota interacts with an individual biologically depends on knowing which bacteria are present in an individual. The Human Microbiome Project is doing a great deal to isolate, identify, and delineate what microbes are commonly found on and in humans.

Obesity and type 2 diabetes are two of the most prominent metabolic disorders we find in developed countries in this day and age. For a great deal of time researchers have been trying to find the link between human genetic abnormalities and these disorders, however have been unsuccessful in finding a correlation between the two9, even in cases in which one monozygotic twin has Type II diabetes and the other does not 10. For obesity there have been some studies showing a correlation between increased relative abundance of Lactobacillus reuteri and decreases in the relative abundance of Bifidobacterium animalis and Methanobrevibacter smithii 11 affiriming the proposition that these disorders are significantly linked to the composition of the gut microbiota. Separately type II diabetes has been shown to be associated with increased levels of Roseburia species and Faecalibacterium prausnitzii 12. This association is thought to be a relationship between the bacteria and humans in which the bacteria are affecting the phenotype of the person, however research done on individuals with Type I and Type II individuals suggestions that this might be a more complex cyclic system in which insulin insufficiency has a direct impact on the bacterial composition of the gut microbiota 13 14.

"Fatty Liver Disease (FLD)" and in its latter and more dangerous phase Steatohepatitis have been linked to the presence and levels of specific classes of bacteria, Ersipelotrichi and Gammaproteobacteria, naturally found in the human microbiota 1. These classes of bacteria have been correlated with choline deficiency, an essential compound in lipid transport and storage in the body. Further research has shown correlation to bacteria found in the microbiota of a specific mouse strain to choline deficiency in via the chemical conversion of choline into methylamines then excreted by the body. Clostridium a genus in the class Ersipelotrichi, is associated with obesity and other metabolic disorders in humans, and was found to be linked with fat deposition in mice as opposed to its metabolization 3 and potentially plays a role in causing choline deficiency. Additionally in humans individuals with NAFLD were found to have higher levels of the genus clostridium and lower levels of Bacteroidetes, a class of bacteria that make up a significant portion of the human gut microbiota and help to regulate proper digestive function 8. 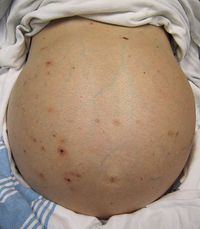 Cirrhosis is considered the pathological end stage of chronic liver disease 15. In China and much of eastern asia it comes about from the hepatitis B virus, however in the United States, Cirrhosis is caused predominantly by alcoholism and diet related issues. Since it is also considered the end stage for chronic liver disease in general, we see some of the same microbial changes that are found at different stages of chronic liver disease. Prevalence of Bacteriodetes were found to be significantly lower in participants with Cirrhosis while bacterial communities of Proteobacteria and Fusobacteria were found to be higher 15. This disruption of Bacteriodetes, a very important and prominent group in the gut, is a common characteristic in most chronic liver diseases and other metabolic disorders associated with the gut. 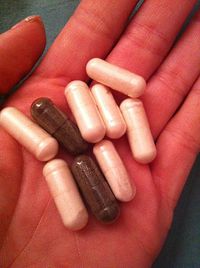 Top of the list of potential treatments for gut microbiota disorders is that of fecal transplants, a historically widely used treatment method that has be "rediscovered" in the past decade as an effective treatment for disorders related to the constituents of the human gut microbiota 16. Primary in viably known treatment for many of these chronic metabolic disorders are simply associated with diet, considering that much the microbial involvement in metabolic disorders are due to disruption of an individuals commensal microbiota established at birth 16. Often times these commensal communities are not necessarily "ill" or "bad", just out of balance, making the goal of treatment to "re-balance" an individual's gut microbiota. Recently in the United States there is a increased usage of probiotics as means by which to introduce or affirm certain communities of bacteria 17. 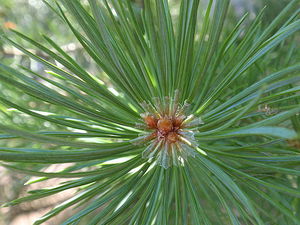 Close-up of the needles of a Scots Pine.

Although not considered a viable form of treatment by many doctors today, there are a growing number of medical professionals that are recognizing herbal, and what many call "eastern medicine" as a very affective form of treatment especially as it relates to the digestive system. A chinese case study in rats 4 showed that regular treatment of rats with an ancient chinese herbal formula was affective in alleviating symptoms of fatty liver disease correlating to a decrease in the presence of bacterial genera Shigella and Escherichia both members of the phenotypic class Erysipelotrichi 4. Additionally an Eastern European case study also found a correlation between treatment of Clostridium genera with a variety of essential oils finding that Scots pine oil was an affective antibiotic agent most affective in treatment of Clostridium ramosum, a bacterial species found to be directly associated with choline deficiency in the gut and the development of NAFLD 1,3,5. Its specificity to C. ramosum signifies it could be used as a potential dietary supplement to treat individuals with choline deficiency and the resulting metabolic disorders.