Methanosarcina barkeri CM1 is a species of methanogenic archaea of the CM1 strain, and like many other methanogens, is characterized by its production of methane as it generates energy. The Methanosarcina barkeri species has a coccoid shape and is nonmotile (Figure 1).[1] The archaea was found within the rumen of a Friesian cow on a diet of clover and ryegrass in New Zealand and since then its genome has led to discoveries in rumen methanogen diversity as well as environmental problems with the production of methane.[2] 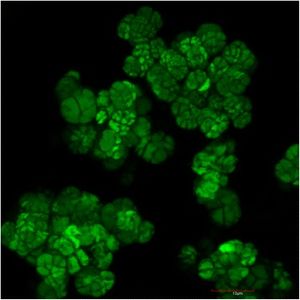 Ruminant animals, such as this cow, through evolution have developed a digestive system that utilizes microbes to ferment plant fiber [3], as well as to produce digestible nutrients necessary for the ruminant host animal.[4] The fermentation of fibers, sugars, and starches produces carbon dioxides, methane, and volatile fatty acids (including acetate).[4] Hydrogenotrophic methanogenesis generates methane from hydrogen gas and carbon dioxide. Acetoclastic methanogenesis produces methane from acetate. Acetoclastic methanogens are the main kind of methanogens in ruminants.[3] 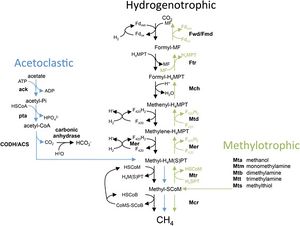 Figure 3: Three methods of methanogenesis, all of which Methanosarcina barkeri CM1 use. (In courtesy of Standards of Genomic Sciences) Link: https://pubmed.ncbi.nlm.nih.gov/26413197/#&gid=article-figures&pid=fig-3-uid-2

Rumen microorganism methanogenesis has become increasingly relevant on a global scale as the raising of ruminants has become more and more commonplace. Methanogenesis occurs by methanogens residing in an animal’s rumen and hindgut.[1] Approximately 89% of ruminant-produced methane comes from the rumen and exits the animal’s body by way of the nose and mouth (Figure 4).[1] Raising animals such as cattle and sheep not only leads to a buildup of greenhouse gases, but also results in a loss of energy through the significant amount of food necessary to sustain ruminants.[1] 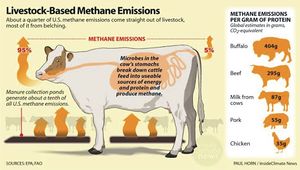 Figure 4: Methane production by methanogens in cattle and specific sources of ruminant methane emissions. Also shown is a comparison of methane emission per gram of protein for various livestock animals. Link: http://benisonmedia.com/a-discovery-to-lower-methane-emissions-from-livestock/

Some of the most harmful greenhouse gases include nitrous oxide, carbon dioxide, ozone, and methane. Methane, however, while second in greenhouse gas abundance to carbon dioxide, is twenty-five times more potent than CO2, has an atmospheric lifetime of twelve years, and can increase tropospheric ozone and stratospheric water vapor content.[1] World wide-agriculture makes up one-fifth of the anthropogenic greenhouse effect and generates half of the total anthropogenic methane emissions.[10]

One method of methane emission mitigation is the use of vaccines against rumen methanogens. Vaccines either lessen the activity of rumen methanogens or decrease their numbers, and would be more cost effective and manageable in livestock that graze. The general idea of a vaccine would include a significant salivary antibody response to introduce antibodies to the rumen and stop some methanogen function.[11] In a study conducted on methane emissions from sheep with vaccinations specific to certain species and strains of rumen methanogens, vaccines caused a serum antibody response which altered methanogen diversity and population. The vaccine also completely or partially eliminated some strains of Methanobrevibacter (a methanogen genus).[12]

Other methods of reducing methane emissions include the use of bacteriophages, homoacetogens, protozoa, and dry matter intake and nutrition. Bacteriophages’ ability to lyse host cells has proven an advantage helpful in curbing methanogenesis from specific methanogen species and strains. Bacteriophages, as is necessary for methanogen-reducing vaccines, specify particular host species or strains and when used to decrease methanogen diversity or populations, work against certain methanogens while leaving others undisturbed in the rumen. However, in order for an efficient use of phages against methanogens, many more phages must be sequenced in order to keep up with hosts, who evolve quickly in order to reduce their risk of infection. In addition, extreme phage specificity reduces the possibility of an effective methane decrease as many different methanogen species and strains exist in ruminants.[11] 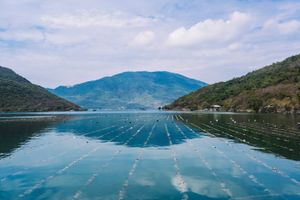 Homoacetogens are bacteria that grow using H2 as energy by reducing it to CO2 and then acetate. In order to reduce methane loss from ruminant feed energy and increase animal efficiency, H2 energy forms acetate and methane production would decrease. Normally, low amounts of H2 in rumen results in fewer homoacetogens than methanogens. By increasing the concentration of homoacetogens in the rumen, more H2 will be used by homoacetogens resulting in an overall methane reduction. Also related to H2 use is protozoa, which transfers H2 to methanogens. By removing or controlling rumen protozoa, less H2 would be present for use in methanogenesis. Possible implementations of minimizing protozoa numbers include breeding entire herds free of protozoa (often done in isolation), the use of detergents to reduce protozoa (chemical defaunation), the use of oils, saponins, and tannins, and focus on diet. Diet changes could potentially cause changes that create an inhospitable environment for protozoa, such as a fluctuation in pH. Another possible diet change is an increased consumption of soluble sugars, which generally produce less methane than plant fibers.[11]

One challenge with changing ruminant diets is the massive production rates necessary for changes to influence overall methane emissions. A recent study examined the effect of seaweed in cattle feed on methane emissions from cows. Research dealt mostly with the Asparagopsis taxiformis species from Southern California and the possibility of growing the plant on a scale large enough to be incorporated into cattle feed. The challenge, however, is growing seaweed in aquaculture farms, as most seaweed farming occurs in only a few Asian nations (Figure 5).[13]

Methanosarcina barkeri CM1 is one of many species of rumen methanogens. As the raising and consumption of ruminants increases, so too does the amount of food and water necessary to sustain this industry. Additionally, because the CM1 strain, similar to other methanogens, can produce methane from multiple molecules, decreasing methane production from animals used for food throughout history and the world proves extremely challenging. However, as global warming becomes an increasing threat, efforts are ongoing to find new ways to keep this food source available while reducing greenhouse gas emissions.