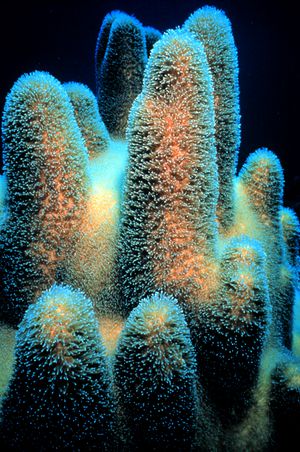 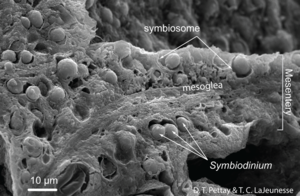 Figure 2: Symbiodinium reach high cell densities through prolific mitotic division in the endodermal tissues of many shallow tropical and sub-tropical cnidarians. This is a SEM of a freeze-fractured internal mesentery from a reef coral polyp (Porites porites) that shows the distribution and density of symbiont cells10

Corals are in the class Anthozoa and phylum Cnidaria. Species that live in the warm, clear waters near the equator are most well known, but species have also been found to live in deeper, colder waters which are nearer to the poles.6 They form calcium carbonate skeletons as a result of their partnership with microalgae. The microbes in symbiotic relationships with the coral are endosymbiotic dinoflagellates. These dinoflagellates are single-celled algae in the family Symbiodiniaceae, and the most common dinoflagellates in tropical coral are of the genus Symbiodinium.4 The clear waters near the equator are nutrient poor and coral do not have the resources to produce their own energy; they rely on their photosynthetic symbionts for energy.


The microalgal symbionts of tropical corals colonize the tissue of the coral in dense populations (Figure 2). The dinoflagellates symbiotes of coral conduct photosynthesis and instead of retaining the products of photosynthesis for their own use, release most of it into the tissue of the coral, which gives it enough energy to form calcium carbonate skeletons.1 As the coral metabolizes the products of photosynthesis, the waste produced is recycled to the dinoflagellates in the form of inorganic nutrients and CO2.4 Eventually, the coral produces a large enough skeleton to be stable and withstand waves in shallow waters. Most tropical corals exist in colonies and many colonies together form a reef.


The process of microalgal recruitment to growing corals is complex and varies in different areas. It occurs throughout the life cycle of corals. Typically, the corals secrete chemical signals which attract the free swimming dinoflagellates.1 There are varying degrees of specificity of microalgal recruitment in different regions. In the Caribbean and Western Pacific, there tend to be a few generalist symbionts that inhabit a wide range of corals. This is due to the location of these areas in relation to other pockets of tropical reefs. Because the areas are similar and not isolated, it is easy for a only a few species of microalgal symbionts to colonize diverse corals.


However it has been found that in other more isolated areas, there is no such generality in the range of microalgal symbionts. In Hawaii, which is very isolated, researchers have found that there is a high degree of diversity and host specificity (See Figure coming soon). The trade-off between having a wide range of available symbionts and a narrow range is also illustrated in the Hawaiian corals.3 This indicates that the microalgae found in any given coral is dependent on geography rather than differences of function among microalgal species. 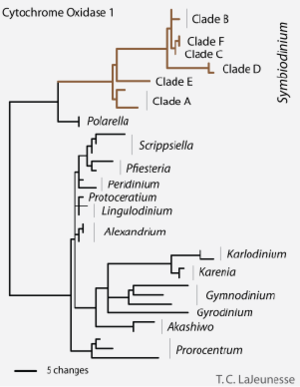 Figure 3: Molecular phylogenetic tree showing the relationship among clades in the genus Symbiodinium11.

The evolutionary history of microalgal symbionts is particularly complex because evolution tends to occur cooperatively when host-symbiont interactions are involved. Because the coral and the microalgae depend so much on each other in the nutrient-poor tropical waters, evolutionary changes in one species automatically affect the other. Also, as seen in the last section, the diversity and specificity of microalgal symbionts depends greatly on the location and type of region involved. Despite the complexity of the subject, researchers have attempted to conduct genomic analyses to determine the evolutionary history of these algae (Figure 3).


Hackett et al. conducted recent research on the genomes of microalgae and found that although they are technically eukaryotes, their nuclei and genome differ somewhat from the "traditional" eukaryote.2 For example, their genomes are very large, they lack nucleosomes, and their chromosomes are in permanently condensed states. These interesting characteristics shed light on the way microalgae may have evolved. Their research indicates that typical dinoflagellate traits were located in plasmids which have migrated into the nucleus. Also, traits were probably passed from microalgae to microalgae by the means of horizantal gene transfer.

Re characterization of the Host-Symbiont Relationship

The role of organisms in symbiotic relationship may be difficult to determine due to the intertwined evolutionary history of the two species. The widely held view in the field concerning coral and their microalgal symbionts is that the relationship between the two organisms can be characterized as a purely symbiotic relationship. This characterization is due to the dependence of the two species upon each other for nutrients. However, there are emerging schools of thought which differ from the general consensus. Wooldridge argues that the recent crisis of coral bleaching and habitat degradation caused by pollution and climate change has led researchers to see this relationship in a new light. When coral bleaching occurs, a "mass exodus" of the microalgal symbionts from the dying corals has been observed, which is not expected with purely symbiotic relationships8 The authors of this paper suggest that the relationship should not be characterized as symbiosis, but as mediated parasitism exerted by the coral on algae. Instead of coexisting with the microalgae, the coral "farms" it for its own benefit.


It has long been assumed that neither corals or their microalgal symbionts could survive in nutrient poor tropical waters, leading researchers to believe that the relationship was symbiotic. However, it has been found that microalgae are capable of surviving outside of their coral hosts.8 Furthermore, when the corals secrete chemical signals and attract symbionts, the relationship is initiated by the party most needing the benefits of symbiosis. When the microalgal symbionts colonize the internal tissue of the coral, they shift from a motile phase to a non-motile phase. This change has negative implications for their reproductive success, and leaves them essentially "trapped" in the coral host. On the other hand, there do not appear to be any costs for corals in relationships with microalgal symbionts. These unequal benefits for the two parties beg the question: Is the relationship actually symbiotic? Wooldridge would assert that is it not; rather,corals exert a controlled parasitism on their microalgal symbionts.8

There has been a recent surge of interest in coral reefs due to concerns of coral bleaching. As climate change continues, and the earth's temperature increases, the acidity of the oceans is also increasing. This increase in acidity is causing the calcium carbonate structures of corals and other marine organism to become compromised, affecting survival.5 This phenomenon has been termed "coral bleaching". Coral reefs depend on a delicate balance of conditions to thrive and coral bleaching can push reefs to the edge. The decimation of coral reefs is not only harmful because of the loss of species, but also because coral reefs occupy a unique place in tropical marine ecology. Coral reefs function as ecosystem engineers, creating habitats in an otherwise barren environment. This habitat creation is a factor in the rich communities of life seen in and around coral reefs.


The evolutionary history, genetics, and cellular biology of microalgal symbionts is incredibly complex and deserving of further study. As climate change continues, it is imperative that more research is conducted to understand the causes and implications of coral bleaching, and perhaps ways to protect reefs from further damage. There has never been a more appropriate time to focus energy and resources on the questions involving tropical coral reefs and the rich ecological communities which are tied to them.

Edited by Breanna Walker, a student of Nora Sullivan in BIOL187S (Microbial Life) in The Keck Science Department of the Claremont Colleges Spring 2013.