The discovery that microbes can survive under the hostile conditions of space has shed light on the possible effects that microbes have on space exploration and, perhaps, future space settlement.

Discovery of Microbes in Space – Aboard SkyLab and KIBO

The space mission aboard NASA’s SkyLab in 1978 documented one of the first accounts of microbial growth in outer space. Space equipment was monitored for viable growth of different microbial species – namely, Aspergillus and Penicillium spp. were most commonly found and thrived on the garments of astronauts (1). This discovery raised many concerns - although most microbes on board originated from human normal flora, mold-forming Aspergillus and Penicillium spp. can lead to health issues such as allergic reactions and pulmonary problems. Due to the humid conditions on SkyLab, spore germination is also promoted and this may be a major concern during prolonged space flights where sufficient time for proliferation is allowed (1).

More recently, KIBO space station has been undergoing constant bacterial sampling and monitoring to document any forms of microbial growth. Ichijo et. al (2013) conclusively agree that the majority of microbes found originated from human normal flora or earth’s soil. With strict sterilizing techniques, bacterial growth on space equipment can be minimized and problematic microbes can be highly controlled (2). That being said, much is yet to be known about prolonged space flight missions and the effects of extended growth times for viable microbes. 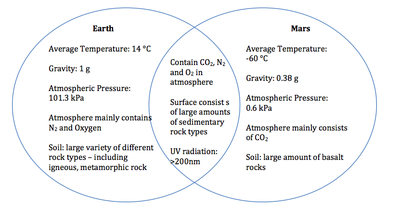 Figure 2. Venn diagram which compares and contrasts environmental factors on Earth versus Mars. Adapted from sources (8) (10).

Low gravity conditions in space, known as microgravity, seem to be especially harmful to humans, who have evolved to adapt to the constant gravitational force on earth. Microgravity causes detrimental effects on our immune and cardiovascular systems, resulting in extreme motion sickness and physical distress (3). Contrarily, microorganisms are less affected by changes in gravity, some surviving, and fairly unaffected, by conditions close to zero gravity for up to 14 days (4).

On Earth, gravity is essential to Paramecium spp., which utilizes gravity as a gradient for mobility, known as gravitaxis (4). Surprisingly, under stimulated microgravity, directed movement of paramecium away from gravity is still apparent to as low as one-sixteenth of Earth’s gravity, therefore concluding that changes in gravity are not as detrimental to certain microorganisms (4). Other effects of microgravity on microorganisms include the increased virulence of infectious strains of Escherichia coli and Salmonella typhimurium (4,5). Microgravity induces a stress response in E. coli and S. typhimurium and activates expression of various virulence factors, such as membrane proteins that promote adherence (6). This stress response is non-specific and highly adaptive, acting to utilize all strategies to increase the bacteria’s chance of survival (6). Different microbes have their own adaptive strategies to cope with environmental stresses but it can be noted that the simplicity of the biological make-up of microbes seems to be advantageous to their ability to survive in microgravity and thrive under space conditions.

Figure 3. The photograph was taken under experimental conditions where A. ferrooxidan was exposed to a sample of meteorite – arrows point to areas where iron has been solubilized by the microbe. Source: Cockwell 2011 (8).

Although the discovery of microbes aboard space missions has raised some concerns, it has also stimulated novel ideas of microbial application for the purpose of space exploration and possible space settlement. One interesting application is the use of certain microbes in mineral processing to convert the hostile surface environments of planets into Earth-like soil surfaces, which may ultimately allow for plant growth on extraterrestrial planets someday. Research is underway in looking at how metal-solubilizing microbes are involved in soil generation by cycling minerals through weathering, ore formation on mineral abundant planets like Mars, and regolith hardening (7).

The potential of microbes stems from their biological diversity. Some important characteristics include their ability to fix nitrogen and survive under low-nutrient conditions (8). As well, extremophiles are heavily favoured as they can withstand unusually harsh conditions - one such organism is Acidithiobacillus ferrooxidans(8). This microbe as a major player in breaking down meteorites – it oxidizes much of the reduced iron available on meteorites, releasing minerals from their aggregate form and allowing these minerals to recycle into ores or generate mineral-rich terrains (8). This process suggests many possibilities in terms of soil generation, biomining and essentially crop and plant growth on seemingly barren surfaces of extra terrestrial bodies.

Most processes essential to maintaining life on Earth seem to come naturally – there is an abundance of natural resources and a surplus of water and food supply. But, because of the vastly divergent environment of extraterrestrial planets, in order to sustain life in space, components such as sources of fuel and nutrients must be considered. Way et. al (2011) recently suggested methods of utilizing microbes, specifically cyanobacteria, as a primary source for all things essential to life. Generally, the benefits of using microbes are that their growth is largely independent on different levels of gravity; as well, they have much more diversity in their metabolic processes, which can then be easily manipulated to achieve different metabolic products. In particular, cyanobacteria uses light as their obligate source of energy, which is largely available in space, and therefore no additional energy is required to power these microbes. Furthermore, they are autotrophic, which is essential in that space is evidently lacking in organic material and carbon sources.

The potential of cyanobacteria stems from their metabolic diversity. For example, they can generate a sustainable source of fuel in lieu of space settlement (9). Using CO2 as their carbon source and inorganic metals as their electron source, chemolithotrophic cyanobacteria are highly efficient in converting energy into biomass and can then be used as a source of biofuel (9). Other interesting applications of cyanobacteria are in space foods and synthesis of building materials, such as plastics (9). If all aspects of processes needed to sustain life are considered, the future of space settlement can be possible – the application of microbes is therefore an important first step in achieving this goal.