Microbial Growth in Insulation, Plasters and Wallpaper in the Built Environment

In the 1970s, the phrase Sick Building Syndrome (SBS) was coined to capture the idea of people getting sick by their presence in particular buildings.A more specific subset of SBS that has been investigated recently is building related illness (BRI), associated with diagnosable illness caused by airborne pathogens. These illnesses usually involve symptoms such as headaches, dizziness, nausea, myalgia, fatigue, irritation of the eye, pharyngitis, tightness of the chest, and other otolaryngological symptoms. Investigations since then have found building parameters such as lack of ventilation to be at fault. Several microbes have been identified as the most common causes of SBS and BRI including the fungi Stachybotrys chartarum, Penicillium spp., Chaetomium spp.,Acremonium spp., and Ulocladium spp. The latter three species especially grow on damp gypsum and wallpaper, which is made of latex or polyvinyl chloride and coated in acetone. Fungi use enzymes, e.g. cellulases and hydrolases, to break down the substrates they grow through [26]. The following page will elaborate on the building materials and growth conditions that allow SBS and the toxicity of SBS species metabolites.

Several factors can help you predict what kind of microbes you may have living in you wall. The microbial life is influenced by insulation material or composition of plaster, climate, season and moisture levels. The composition of the insulation materials has been studied: ingredients such as polyvinylacetate coatings of gypsum lime plaster (produced from calcium sulfate dehydrate), and the substrates in natural gypsum, desulfurization gypsum, glass wool, polystyrene foam and granulated cork, and antimony trioxide (a fire retardant coating used on some building materials). The availability of accessible nutrients from these sources dictates microbial growth; for many of these materials carbon compounds or cellulose are the primary nutrients substrates for resident microbiota. Researchers have analyzed the effects of temperature - even in subartic climates we can see fungal growth. Humidity (moisture specifically) has a positive correlation with most fungal growth; the exception to this would be xerophilic species.

Outputs of Microbial Growth and their Effects on Mammalian Health

Fungal growth byproducts have been largely documented. These mycotoxins are a culprit of health risks. Mycotoxins include compounds such as aflatoxins, trichothecenes and ochratoxins. The maladies they cause- known collectively as mycotoxicoses- are associated with warm, wet climate and as such can be prevalent in certain seasons. Symptoms of myctoxicoses can blend in with symptoms associated with other seasonal disease, too; these symptoms include coughing and sneezing, and headaches, but can deviate from these familiar symptoms to include burning in the throat and lung, eventually cancer, nosebleeds, nausea, and diarrhea among other even more frightening symptoms [10]. Secondary metabolism of microbiota in insulation can produce (1-3)β-D-glucan and a subgroup of toxins known as volative fungal metabolites/volatile organic compounds [3]. (1-3)β-D-glucan causes activation of the innate and complement components of the immune system and potentially produces asthmatic symptoms. The volatile organic compounds can cause hay fever-like symptoms.

Stachybotrys chartarum produce two types of metabolites: trichothecenes and atranones. Studies conducted on mice and guinea pigs at the Integrated Laboratory System in Research Triangle Park, NC, found that intranasal inoculation with 1,000,000 spores of S. chartarum causes pulmonitis and pharyngitis as well as localized activation of innate immune response as well as lymphocytes (part of the adaptive immune response)[25]. In the same study, mice exposed to aerosolized form of the fungus still exhibited pulmonitis. Conclusive results have not been found with human case studies/census. One of the toxic compounds that confers pathogenicity and a symptomatic state is satratoxin. Another study conducted at the Center for Integrative Toxicology at Michigan State Univeristy found that in mice, exposure to satratoxin led to neuronal apoptosis in the olfactory epithelium. Satratoxin inhibits the synthesis of protein involved in lymphocyte proliferation, in antibody immunoglobulin production, and macrophage activity.

Penicillium spp. especially Penicillium polonicum grow on wallpaper and plasterboard and produce verrucosidins, penicillic acid and glycopeptides. These fungi-specific compounds are known to induce tremors and ataxia as well as nephrotoxicity. In an observational study conducted in South Africa on pigs, ingestion of penicillic acid was shown to cause kidney damage/disease. Toxins in P. polonicum are still being isolated- a 5 fold metabolite concentration increase (from 10µg/mL to 50 µg.mL) isolated in 2009 (yet to be named) was found to reduce human lymphocyte excitability from by 15% (from 60% stimulation to 25%; 100% stimulation was the baseline established at 0% mycotoxin, by volume).

Chaetomium spp. produce chaetoglobosins,and sterigmatocystin. The good news is that while chaetomium growth and reproduction is favored in an acidic environment, chaetoglobosin production is favored in a neutral pH environment. Scientists at the Department of Pharmacology at Baylor College of Medicine found that 9 mg/ kg dose of sterigmatocystin modified DNA in rat kidneys, creating adducts.


Ulocladium is classified as an allergen and is cross reactive with Alternaria [21]. Alteraria is a pollen producing allergen which when tested in mice accelerated the IL-33 release in mice causing pulmonitis and loss of lung function [20]. 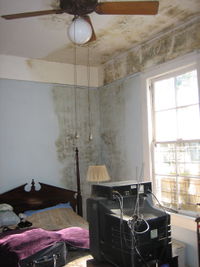 How Studies are conducted on 'Sick Buildings'

In vitro studies are pretty standardized. They involve treatment of various surface types with water and exposure to mediated ventilation and environments and analysis of growth after allotted period of time. Researcher Friman used recycled paper samples as her substrate coated in biocides and exposed the paper to allergens (namely grass) to see what would grow (the allergens serve as a realistic example of what can incite mold growth in the walls- as some microbiota are airborne and others require surface to surface transmission. Despite the biocides, growth of Aspergillus spp.,Cladosporium spp., and Pencillinium spp. was found. Other studies used direct inoculation of the substrates by swabbing fungal solution on the insulation materials. The common theme among these studies was that less dense material were more easily sporulated and affected. The in vivo studies were helpful in concluding what microbiota most commonly grew over time- data was analyzed by DNA sequencing so that even if there was no sporulation yet- due to lack of moisture or insufficient heat or insufficient aeration of the growth substrate- the offending microbiota could be found. Studies conclude what you might expect to find in your office (granted you know what your office building is built of); common plaster fungi include Coprinus spp, Peziza spp, and Pyronema Domesticum (note spp tells us that multiple species in this fungal genus grow on plaster)[11].

Prevention and Proactive Considerations: How to Counteract Sick Building Syndrome

Several solutions have been posited in research to this health threat. Germicidal irradiation is a possibility for exposed surface (wouldn’t work for inaccessible layers inside the wall). Retailers such as Ronseal offer anti-mould paints which advertises prevention of mould growth for around 5 years. Proper sealant and water stripping through buildings will help control aw (“the partial vapor pressure of water divided by the standard state partial vapor pressure of water”[13]).

Edited by Jocelyn Wensel, a student of Nora Sullivan in BIOL168L (Microbiology) in The Keck Science Department of the Claremont Colleges Spring 2015.