Microbial corrosion is a form of biodeterioration and is frequently referred to as biocorrosion or microbially influenced corrosion (MIC)¹. This degradative process primarily acts on metals, metalloids, minerals, and other rock-based materials. Aside from bacteria, fungi, microalgae, and naturally occurring organic/inorganic chemicals contribute to biocorrosion.

Many different bacterial genera are associated with MIC and are often categorized by their respiration techniques. Some common examples of these are:

There are many other miscellaneous groups of bacteria that use or respire metallic substances and contribute to biocorrosion. Some Pseudomonas species can reduce iron, while other bacterial species can oxidize/reduce less abundant metals like manganese, palladium, nickel, etc. There are also biocorrosive bacteria that do not utilize metals but secrete organic acids which can break down surrounding materials.¹ ² It is important to note that not all species within a genus induce MIC and not all perform the same types of respiration.

Despite a lot of experimentation and investigation into the detailed mechanisms of microbial corrosion, many elements of these processes are still unknown. In general, the process involves such mechanisms as: acidic degradation, electron movement, metal depolarization, polymerization and attachment of biofilms, and mineral formation.³ 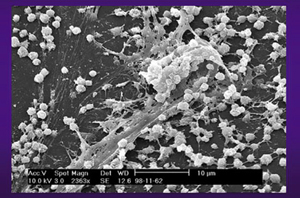 Bacterial biofilm on a metal substrate.⁴

Biofilms are a primary tool used by bacteria to adhere to a substrate’s surface and facilitate metabolism/respiration optimization. In the case of MIC, biofilms are an essential part of the degradation process. Bacteria create biofilms by producing extracellular polymeric substances (EPS) such as lipids, polysaccharides, nucleic acids, and proteins. Fungal species can also create and reside within biofilms, and are often found within close vicinity of bacterial biofilms. The ability of a biofilm to bind to a metal substrate is dependent on the bonding affinity of the metallic ions and the anionic functional groups of the EPS’s.¹ Biofilms can be very diverse, and within one small area of biofilm, multiple species can be found and in very close proximity. Therefore, the actions of some species can affect the others. Scientific evidence suggests that within biofilms certain bacterial species might actually inhibit corrosion. Instead of physically blocking adhesion to the metal substrate, as originally hypothesized, the removal of nutrient sources and metabolites necessary for the functioning of other corrosive species has been observed.⁵ The close proximity of biofilms to metal substrates establishes electrochemical gradients that allow the generation of free electron flow at anodic sites (site where metal is dissociated by bacteria).³ The cathodic sites are found where oxygen is present and where the corrosion is visualized (rusting, fouling, etc).

Microbes can either fully corrode substances or partially degrade them, the latter allowing the substance to be further broken down by other organisms or chemicals.

In most cases the microbes secrete exoenzymes that solubilize or dissimilate components of the substrate like complex compounds or large molecules. This action facilitates more rapid degradation of the substrate. Such enzymes include hydrogenases, catalases, and oxioreductases, which are found within biofilm matrices or the surrounding environment. The complete biocorrosion of metals is the coupled action of exoenzyme secretion, causing initial degradation, followed by oxidation either by free oxygenic chemicals or microbial oxidation.⁶ Many of these chemicals secreted by the microbes that solubilize metals and are not degraded by the microbes are known as chelators.³ Chelators are often coupled with ‘shuttle compounds’ that are reduced by the microbe with electrons from metabolic oxidation, which in turn reduce the metal ions of the substrate. Humic acids are a major naturally-occurring group of chelators that include quinoids, such as 2,6-anthraquinone disulphonate (AQDS), and other acidic compounds.⁷ 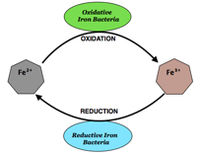 A simple redox reaction cycle between iron-oxidizing and iron-reducing bacteria.

Bacterial species that perform MIC and form biofilms on metallic substrates use metal ions as terminal electron acceptors (TEA) during respiration. Metal respiring bacteria require extracellular reduction of metal compounds, often in a biofilm matrix, as they cannot uptake these compounds into the cell.⁸ This is termed “dissimilatory metal reduction” because metals are used solely as TEA’s and cannot be incorporated into bacterial biomass.⁹ The use of chelators and shuttle compounds allows for free electrons to be released and subsequently used by the bacteria for respiration. Many fungi are also capable of metal reduction in order to gain access to substrate-bound electrons. Some bacteria, like Shewanella sp. use nanowires, which are electrically conductive filamentous appendages that transfer electrons directly to metal surfaces. The reductive processes used for respiration do not cause the physical corrosion that is observed on metal surfaces, but breaks down the metals allowing oxidation and visible corrosion. Most microbes that use metal substrates do so because their environments are nutrient poor, anaerobic, or they have few other choices. 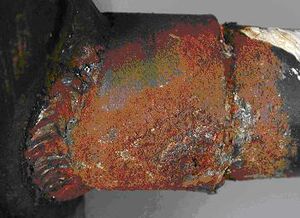 Microbial corrosion plays a huge role in material degradation. It is a significant cause of corrosion of man-made structures, most notably underground pipelines. It is estimated that in North America and the United Kingdom, billions of dollars worth of damage to pipes, industrial machinery, sewer , etc., have been caused by microbial corrosion. Despite the use of preventative agents, like insulative casings, or more durable metals, such as stainless steel, to combat MIC, corrosion persisted in many cases.² Microbes perform MIC of not only metals but of rock, concrete, etc. Evidence has also shown extensive biocorrosion of caves, old monuments, and building foundations. Pitting, a localized form of corrosion causing small holes in the substrate, is typical visual evidence suggesting MIC.¹⁰ In general, fungi tend to deteriorate materials like concrete, stone, and ceramic faster than bacteria. However, the two organisms are usually found simultaneously at biocorrosion sites. The coupling of their degradative properties is what causes extensive and rapid deterioration of materials.³

10. Nuhoglu, Y. “The Biodeteriorative of Microorganisms and the Effects on Stone Monuments Under Air Pollution and Continental-Cold Climatic Condition in Erzurum, Turkey.” Fresenius Environmental Bulletin, 2004.