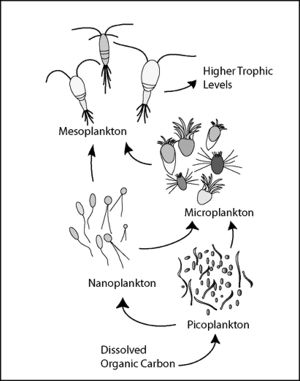 Depiction of the microbial loop. Original uploader was Umarina at en.wikipedia Released into the public domain (by the author).

The microbial loop is a depiction of the microbial food web. The pathway starts with dissolved organic matter (DOM) which makes its way through various trophic levels ultimately to the highest trophic levels. This is relevant in aquatic and soil systems. Organisms involved in the microbial loop include DOM, bacteria, micro flagellates, protozoa, nematodes, ciliates, phytoplankton and various other nutrient cycling bacteria [3]. The microbial loop is ecologically significant because it is directly involved in nutrient cycling and primary production of biomass ultimately effecting large-scale ecological functions.

The microbial loop can best be explained starting with DOM. DOM, or dissolved organic carbon, are concentrations of free organic carbon below 0.45 micrometers [4]. DOM consists of molecules which were once parts of living organisms such as proteins, carbohydrates lipids and nucleic acids. This DOM is then utilized as a food source for bacteria. Bacteria are the only organisms capable of recycling DOM making them an extremely vital component for the continuation ecosystem function. From here, basic food web interactions take hold. All this organic matter is transferred from smaller levels to the largest levels of ecosystems [1]. The DOM is recycled back into the system as various organisms from all trophic levels die off and are broken down smaller and smaller.

Exudates from plant roots increase nutrients in the rhizosphere resulting in a bacteria growth increase. If it were not for the bacteria eating protozoa and nematodes in the soil, plant available nutrients would be locked up in bacterial biomass. [8]. This interaction in the soil has both a “top-down effect” on control of bacteria numbers as well as a “bottom-up effect” on the nutrient-acquiring micro-fauna in terrestrial environments. (See current research for more info.)

DOM is introduced into the system in many ways including sloppy feeding and excretion of waste products from aquatic organisms [3]. Algal exudates are also an extremely important source of DOM. Various bacteria uptake DOM as a source of energy. These bacteria are then consumed by protozoans, microbe consumers of bacteria and algae. Zooplankton, like copepods and other organisms then feed off these protozoans and the link to the traditional food web is established. Zooplankton are eaten by bigger organisms (shrimp) which are eaten by bigger organisms (fish) and so on down the line. 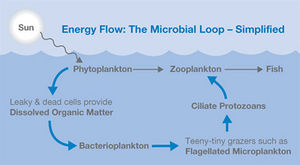 It is universally understood that protozoa stimulate plant growth. Current research is being done to explain this phenomenon. Studies have shown that it is the protozoan presence that enhances soil nitrogen mineralization and plant nitrogen uptake from organic nitrogen sources and not the presence of complex interactions between plant roots, bacteria and protozoa via the soil microbial loop. What this means is that soil nitrogen availability may be the key factor resulting in plant growth via protozoan interaction and that the microbial loop is not relevant in this process [5].

Studies have shown that the warming of sea tempratures results in an increased extracellular release of carbohydrates from phytoplankton. This results in an increased C:N ratios of DOM with the higher tempratures. Possible future implications of this could be bottom up effects on the microbial loop in cold seas resulting in a change of aquatic species compostions[6].

Expansion of the Microbial Loop

Sources say certain micelle-like microparticles have gone unstudied as a particular source of food for planktonic bacterivores. The chemical makeup and size of the microbparticles sugest that they are ideal sources of energy for bacterivores. This sugest that a large portion of DOC could bypass the trophic levels established by the microbial loop. This finding sugests that the carbon cycle in aquatic systems be restudied with respect to the pathway DOC which would yield an expansion on the current microbial loop [7].

Edited by Nathan, a student of Angela Kent at the University of Illinois at Urbana-Champaign.