The use of lactic acid bacteria (LAB) as starter cultures is essential in the production of fermented foods. In cheese production, LAB play a role in ripening and development of flavours. This is accomplished through their various metabolic effects, such as acidification of the environment, the breakdown of proteins, and the production of volatile aroma compounds. LAB also aid in preservation of the food by producing natural antimicrobials.

Lactic acid bacteria Lactic acid bacteria are bacteria that metabolize carbohydrates to produce lactic acid. Relying on anaerobic fermentation, they use glycolysis to break down carbohydrates into pyruvate, which is then converted by lactate dehydrogenase to lactic acid [4]. Some are also able to use an aerobic pathway to a lesser degree, but this simply acts as a supportive pathway [4]. LAB also tend to have an incomplete metabolism for amino acid production, but have an extensive system of enzymes involved in the degradation of proteins into amino acids [1]. This is likely an evolutionary outcome of living in protein-rich environments and explains their suitability in cheese production [1]. An example of LAB commonly used in the cheese industry is Lactococcus lactis, which includes the subspecies lactis and cremoris. These are spherical, gram-positive bacteria naturally found on plants that find their way into and multiply in the digestive systems of animals that consume them, such as cows [4].

Lactic acid bacteria as starter cultures are central to cheese production. They begin the process by degrading proteins in the starting material. The proteases of the starter culture, as well as the rennet in curd and the plasmin in milk, degrade proteins, namely casein, to produce free amino acids and peptides [8][12]. These amino acids not only contribute to the basic taste of cheese, but are also essential precursors to the volatile aroma compounds that are responsible for the distinct cheese flavours [12]. The free amino acids are converted to volatile components by amino-acid-converting enzymes (AACEs) [8]. Because of the variance in the presence and/or regulation of AACEs in different strains of LAB, resulting in differences in levels and types of amino acids produced, their flavour forming qualities also vary depending on the strain, contributing to the diversity of cheese types and flavours [8]. Controlling the processes of amino acid degradation during cheese ripening provides a means of controlling its flavour development [11]. Additionally, the lactic acid produced by the LAB’s metabolism helps in curdling, and also lowers the pH of the product to preserve against other microbes [5][9]. LAB also produce natural antibiotic-like substances called bacteriocins that act as natural preservatives, such as the nisin produced by Lactococcus lactis, which prevent spoilage from yeasts and moulds, as well as other bacteria [7][9].

Various groups of volatile aroma compounds important to flavour and scent of cheeses have been identified. These include acids, aldehydes, alcohols, esters, ketones, and the sulphur compounds dimethyl disulfide (DMDS) and dimethyl trisulfide (DMTS) [8]. The major precursors of such compounds are aromatic amino acids (ArAAs), branched-chain amino acids (BcAAs), and methionine [8]. There are two different pathways involved in the conversion of amino acids to aroma compounds, one initiated by elimination, and the other by transamination [11]. The elimination-initiated pathway is used for ArAAs and methionine, but in cheese microorganisms, this is not a primary pathway for ArAAs [11]. For methionine, methanethiol is produced by γ-elimination, and this is further oxidized into DMDS and DMTS [11]. For Lactococcus lactis, this is accomplished by the enzymes cystathionine β-lyase and cystathionine γ-lyase [11]. The transamination-initiated pathway is more extensive, used for all ArAAs, BcAAs, and methionine [11]. It is a multistep pathway that involves an α-keto acid intermediate [11]. Aminotransferases catalyze the degradation of the amino acids into α-keto acids [11]. These are then further degraded into hydroxyl acids, carboxylic acids, or aldehydes with either one or two carbons missing [11]. The transamination reaction can be controlled to either cause an overall intensification of amino acid transamination, or to favour certain amino acid group transaminations, thereby influencing flavour formation [11]. In terms of flavour, different groups of compounds contribute differently. Sulphur compounds are associated with flavours of boiled cabbage, potatoes, meat, garlic, and egg, while thioesters are associated with cabbage and cauliflower [1]. Compounds derived from BrAAs are associated with sweaty, malty, sour, and buttery flavours [1]. ArAA derived compounds are diverse, ranging from flowery, to bitter, and to chemical flavours [1]. 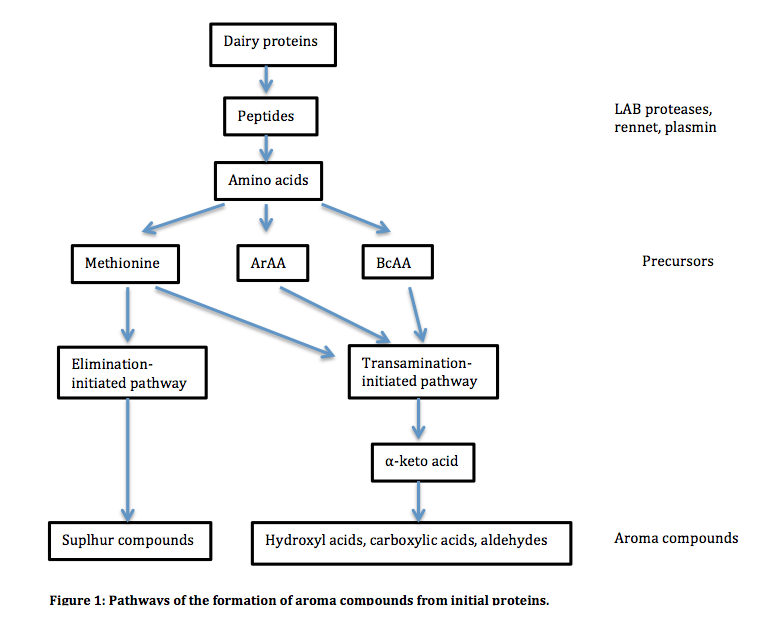 Another aspect of LAB that affects cheese production is autolysis. Bacterial autolysis is a result of the regular degradation of peptidoglycan by autolysin activity paired with the cessation of peptidoglycan synthesis induced by unfavourable environmental conditions [2]. LAB have exhibited extensive autolytic activity as starter cultures for cheese, and this has an impact on its texture and flavour. The LAB’s intracellular enzymes that are central to proteolysis and the development of cheese flavours are rapidly released during autolysis [2][3][6]. This causes an increase in the proteolytic activity and the rate of amino acid production [2][6]. This process improves the quality of the flavour by reducing bitterness. Bitterness results from an imbalance in the production of bitter peptides by the partial breakdown of proteins and the base flavours of amino acids [3]. The speeding up of peptidolysis caused by the release of intracellular peptidases during LAB autolysis results in higher amino acid levels, effectively reducing bitterness in the cheese [2][3]. LAB generally undergo extensive autolysis following the maximal growth stage, but the nature of the medium in which the population is growing plays a primary role; the depletion of a carbon source, NaCl concentration, heat, and ethanol levels all affect the rate of autolysis in LAB [6]. It has also been shown that when a lactose medium is switched to a glucose medium, LAB autolysis increases [6]. LAB autolysis can be regulated in cheese production by selecting highly autolytic or genetically modified strains as starter cultures [6]. Introducing different strains that produce bacteriocins against the starter culture is another method to provoke autolysis externally [6][7]. 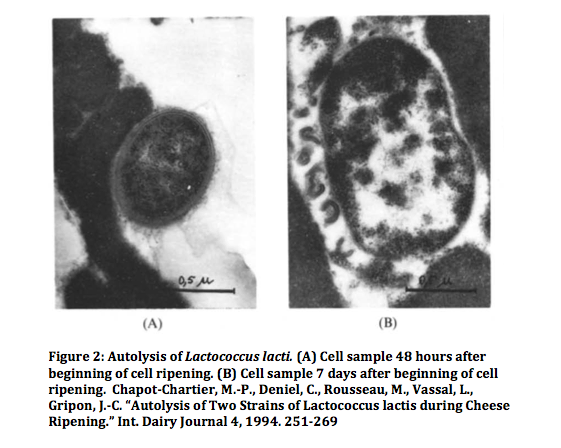