Microbiota of Patients with Atopic Dermatitis

Atopic dermatitis causes inflammation, redness, and itchiness on the back of the elbow joint in an adult [2].

Atopic dermatitis, also known as eczema, is a chronic inflammation of the skin that affects about 17% of the population, mostly infants and young children [1]. Symptoms include itchiness, redness, dryness, and pain due to breaches in the skin. Breaches to the protective barrier of the skin allow bacteria to enter and establish an infection. The normal flora of the skin normally does not cause infections in healthy individuals. However, atopic dermatitis creates an exposed area on the skin for opportunistic pathogens to cause an infection. Studies have shown that the microbiota of patients suffering from atopic dermatitis differ from the microbiota of healthy people. 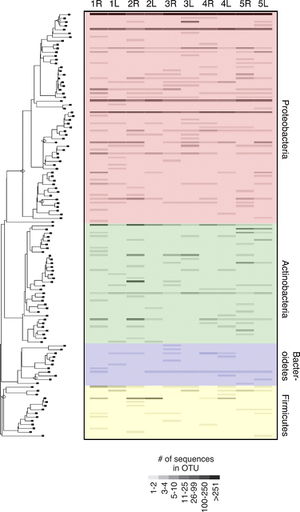 A phylogenetic diagram showing the dominant inhabitants of the skin normal flora [4].

The skin is the largest organ in the human body. It is inhabited by many bacteria that are usually harmless and serve to out-compete potentially harmful bacteria [3]. These commensal bacteria have high diversity which allows them to colonize different areas of the body. The surface of the skin such as the forearms, back of the hands, legs, and back can be dry and high in salt concentration. This can inhibit some species of bacteria that cannot grow in dry and salty environments but allow other species to thrive in this environment. On the other hand, moist areas on the skin such as between the toes, behind the knees, and under the arms are ideal environments for some bacteria.

It was commonly thought that the key organisms inhabiting the human skin were "Staphylococcus epidermidis" and "Staphylococcus aureus" but research has shown that this is not the case. A research done by sequencing the 16S ribosomal RNA obtained from the skin of five healthy volunteers ranging in age, race, and ethnicity showed that only 5-10% of the skin microbiota was "S. epidermidis" or "S. aureus" [4]. The dominant inhabitants of the skin normal flora belong to the four phyla: Proteobacteria, Actinobacteria, Bacteroidetes, and Firmicutes in the order of abundance on the skin [4].

Patients with atopic dermatitis show defects in their innate and adaptive immune response which increases the risk of bacterial and viral infections [5]. Thus, patients with atopic dermatitis have more colonization of "S. aureus" on the skin, leading to complications of the skin disease [5] [6] [7]. "S. aureus" secretes exotoxins that aggravate inflammation by inducing an inflammatory immune response against the pathogen [7]. This leads to more itching and scratching of the infected area which elevates the symptoms of atopic dermatitis.

Atopic dermatitis causes aggravation of symptoms on the skin.

There are over 1000 bacterial species that live in the gut of humans [8]. These anaerobic organisms help with the digestion of foods and absorption of nutrients in the intestines [9] [10]. Research shows that the microbiota of humans contribute about 360 times more genes than the human genome [10]. These microbial genes are necessary for human survival and can encode for enzymes to digest the food that would otherwise not be digested [10]. The diversity of the gut normal flora is established upon birth and further develops as food containing a variety of microorganisms is ingested.

The key microorganisms present in the gut are categorized into two phyla: Firmicutes and Bacteroidetes [8]. Research shows that the balance between these two dominant phyla in the gut controls the energy metabolism of the host and imbalances can lead to metabolic diseases [8].

The basic treatment of atopic dermatitis is skin care [13]. This includes moisturizing the skin, avoiding non-specific irritants such as wool, and avoiding irritating factors such as soap, hot water, extreme pH solutions, and allergens [13]. Further treatments are also available depending on the severity of the disease [13]. Examples of further treatments include emollients, corticosteroids, antimicrobial therapy, and UV therapy [13].

[11] Abrahamsson TR, Jakobsson HE, Andersson AF, Björkstén B, Engstrand L, Jenmalm MC. “Low diversity of the gut microbiota in infants with atopic eczema.” The Journal of Allergy and Clinical Immunology, 2012, 129(2): 434-440.