A Microbial Biorealm page on the genus Myceliophthora thermophila 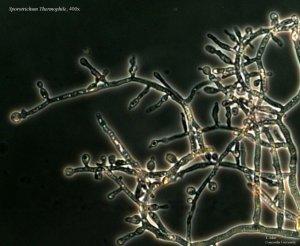 Myceliophthora thermophile is an eukaryotic microbe, a mold, which is usually extracted from soil or self-heated cmoposts [2,3,4]. M. thermophila produces phyriform (pear shaped) conidia that measure between 3.0 and 4.5 μ. The conidia start off smooth and white and when they are mature, they are a dark brown color with a rough surface [3]. thermophiles grow optimally at high temperatures. This microbe grows optimally between 45-5 C°[2]. M. thermophila is a thermophilic phaeoid mold that is found in wood, straw and cmopost made of animal excrements in agricultural settings, such as farms [2]. It has been found to cause rare ifnections in humans that are hard to treat due to its resistance to standard antifungal medications and its ability to withstand high temperatures and pH levels [3]. 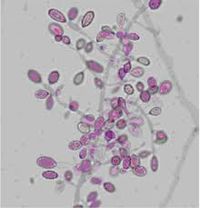 M. thermophila is pyriform (pear shaped) conidia that meausre between 3.0 and 4.5μ [3]. They reproduce asexually and they grow on specialized stalks called conidiophores [2]. When the cell colonies are immature, it is white and looks almost like cotton. It then becomes dark brown in color and rough when it matures [3].

It is a strict aerobe (cannot grow without the presence of oxygen) and is a L-lysineauxotroph [1]. This means that it has lost the ability to synthesize L-lysine which is needed in order to grow.

M. thermophila is isolated from soil and self-heated compost [2,4]. Strans of it has been found in the soil of North America, Europe Africa, and Asia[4]. It is also found in straw and animal compost [2,3]. Its ability to efficiently decompose straw allows it to grow on insoluble cellulose much like it grows on glucose[4]. This ability as well as the increased catalytic rates at high termperatures [2] would help promoste the development of bioproducts [4] and would help the development of advanced technologies for derived fuels and chemical industries [2].

M. thermophila has been the root cause of the rare, invasive human infection known as osteomyelitis [3,4]. It causes severe destructive osseous and cartilaginous infections that were untreatable by many antifungal agents [3]. Voriconazle, an antifungal medication used to treat serious infections, was prescribed to the patients after other antifungal medications were unsuccessful [3]. Infections occur after traumatic injuries in agricultrual areas [2,3,4].

M. thermophila, with it's ability to survive in high temperatures and withstand low pH levels [2], has been used in research to better develope new ideas for technologies for derived fuels and chemical industries [2]. Also, with it's ability to break down cellulose, it is being looked at to help with landfills and compost centers. Recently, a gene that originated in M. thermophila was used in order to create a bioindustrially produced enzyme, laccase, to be used in oral care products to prevent halitosis[5]. This can be found in products such as toothpaste, mouth wash, and mints [5].