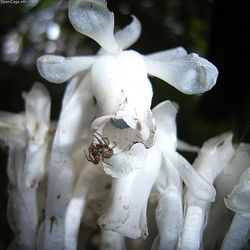 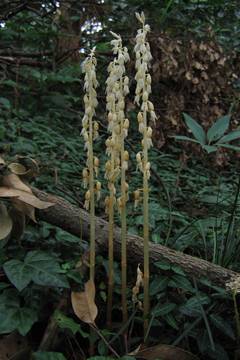 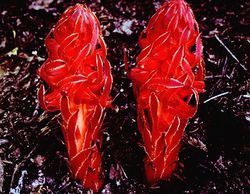 Mycoheterotrophy is the process by which plants, either wholly or partially achlorophyllous, sustain a heterotrophic metabolism via a fungal partner that provides a source of carbon and mineral nutrients (Smith & Read 2008). Mycoheterotrophic plants are considered parasites of their fungal hosts, which are often--but not invariably--associated with the roots of a fully autotrophic plant.

While the effects of obligate mycoheterotrophs are not usually measured on the ecosystem scale, some evidence exists that adult plants can facilitate the recruitment of proximal conspecific seedlings by supplementing their carbon demand through a common mycelial network (i.e., the "wood-wide web"). This process of positive-feedback is thought to be responsible for the establishment of monoculture forest patches dominated by ectomycorrhiza plant species, even within a diverse matrix of surrounding forest (McGuire 2007). This transitive dependence on an external carbon source is termed mixotrophy.

Mycoheterotrophic plants occur in a diverse and unclustered group of plants, which include liverworts, ferns, and monocot (ex. in the order Orchidales) and some dicot (ex. in the family Monotropideae) angiosperms. The fungal hosts include highly specific functional groups of ectomycorrhiza from the orders Basidiomycota and Ascomycota, sometimes called monotropid and orchid mycorrhizas, as well as some arbuscular mycorrhizas from the order Glomeromycota (Bidartondo 2005).

Note that mycoheterotrophy is distinct from the direct plant-plant parasitism that results when plant parasites (ex. mistletoe) develop haustorium that tap directly into a host plant's vascular tissue.

A plant family tree displaying taxa with mycoheterotrophic individuals with a dashed line. From Bidartondo (2005). 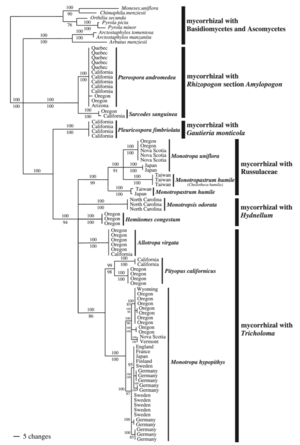 Mycoheterotrophic plants are very host specific. They associate both with saprotrophic fungi, which obtain carbon from the decomposition of dead plant material, and mycorrhizas that obtain carbon from host-plant photosynthate (Leake 2005). Mycoheterotrophs are often--but not exclusively--associated with patches of ectomycorrhizal plants, which sustain the fungal host with a source of carbon, facilitating the production of a soil mycelial network (McGuire 2007).

These mycelia can interact with mycoheterotrophic roots, which have a specialized root-ball morphology. The plant root-balls are encapsulated by a hyphal sheath similar to those characteristic of the plant-ectomycorrhizal interface. However, the Hartig net, which acts as the source of carbon and nutrient exchange in mutualistic ectomycorrhizas, does not penetrate beyond the mycoheterotrophic epidermis. This morphological difference effects a unidirectionality of carbon flow through the mycelial network, making the mycoheterotroph exclusively a carbon sink (Smith & Read 2008).

Considering their total dependence of on fungal carbon, and maximum adult sizes of up to 2 meters tall (Pterospora andromedea) and masses of several kilograms (Sarcodes sanguinea, see photo above), mycoheterotrophs must consume a substantial proportion of the photosynthate transferred to ectomycorrhizas. While the effect on both the fungus and ectomycorrhizal host plants should be negative, it is not clear that this is ecologically relevant (Leake 2005).

Mycoheterotrophy can be entirely obligate, or else partial, in which case it is called "Mixotrophy". Plants in these categories can be distinguished by their dependence on fungal inoculation, a morphological basis, and 13C/12C isotopic signature (Leake 2005, McGuire 2007, also see Smith & Read 2008 for a review of the taxonomy of mixotrophic plant families).

Plants that either (1) maintain some stem and/or leaf photosynthetic capacity (partial mycoheterotrophy) or (2) receive supplemental carbon from a common mycelial network (facultative mycoheterotrophy) in order to tolerate the shady understory are called mixotrophs.

Plants that form a classical ectomycorrhizal colonization can receive supplemental carbon from the mycelial network at early life stages under the plant canopy, and then change to autotrophy in the presence of sunlight. This process is thought to be especially important in maintaing ectomonodominant tree stands--monoculture patches of ectomycorrhizal trees--within tropical forests characterized by a diverse flora of predominately arbuscular mycorrhizal tree species. See McGuire (2007) "Common ectomycorrhizal networks may maintain monodominance in a tropical rainforest". 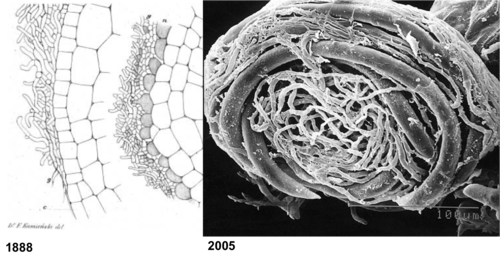 The earliest known drawing of a mycorrhizal fungus (left, from 1888), showing the sheathing of hyphae along the root epidermis and a layer of dead plant cells. An electron micrograph (right) of the infected roots of the mycoheterotrophic Afrothismisa from 2005 shows the same thing in three-dimensions (see Dr. Hans Christian Weber's research profile). 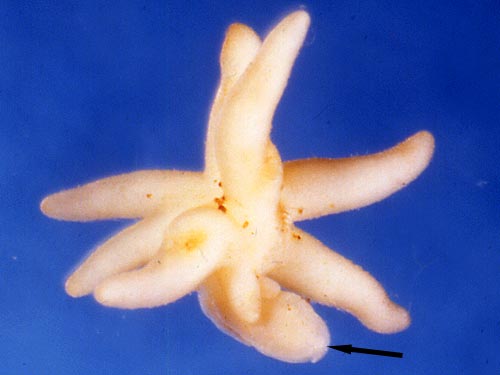 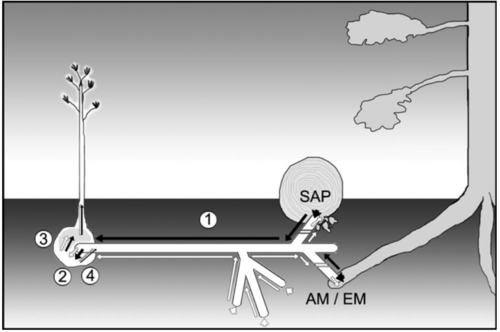 A schematic diagram of the mycoheterotrophic interaction between a plant and a sapotrophic (SAP), ectomycorrhizal (EM), and arbuscular mycorrhizal (AM) fungus. 1 carbon acquisition by fungus, 2 transfer of fungal carbon to host plant, 3 remobilization of acquired plant carbon, and 4 plant excudates (including a Myc factor) that stimulates the fungal association. From the Virtual Issue on Mycoheterotrophy in New Phylotogist (2010)

Because mycoheterotrophs are dependent on their fungal hosts for carbon, they tend to be distributed around trees that associate with their mycorrhizal hosts. Also, as their is no competitive advantage for capturing light, they can remain in the shady understory (Leake 2005).

Mycoheterotrophic plants are generally very host specific (see the consensus phylogram of relationships within Monotropodideae), with some exceptions (Hynson and Bruns 2009). Germination of mycoheterotrophic plant seeds is stimulated by the presence of host-fungus, such that seeds can enter long-term dormancy if they are isolated from their hosts (Yagame et al. 2009). However, very little is known of the chemical signals, or the genetic basis, of the plant-fungal interaction.

It is important to note that no fungi is specially adapted to serve as a host for a mycoheterotrophic plant. It is quite the other way around--mycoheterotrophic plants have evolved strategies to extract carbon from (predominately) mycorrhizal hosts. These hosts include three primary functional groups: Ectomycorrhizas, Arbuscular mycorrhizas, and some Saprotrophs (a review of the specific taxa in these functional groups can be found in Smith & Read 2008, pgs. 477-506).

Fungal hosts come primarily from the order Basidiomycota, with important families including Russulaceae, Tricholomataceae (esp. genus Tricholoma). Also common are fungi from the genus Rhizopogon, from the family Rhizopogonaceae and order Botales.

The fungal hosts confirmed of mycoheterotrophic plants includes species of the family Glomus group A (see Morton and Benny 1990), and at least one species of the genus Gigaspora.

The debate as to whether some mycoheterotrophs obtain carbon independently or from saprotrophic fungi (decomposers) is long-standing (see Jonathon Leake's (2005) Plants parasitic on fungi: unearthing the fungi in myco-heterotrophs and debunking the ‘saprophytic’ plant myth . However, molecular tools have revealed that plants that obtain carbon from decomposing leaf litter due so through a saprotrphic fungal host.

For example, molecular methods have demonstrated that the achlorophyllous orchids Epipogeum roseum and Fulophia zollingeri associate with saprotrophic fungi from the family Coprinaceae (including Corpirnus disseminatus, Psathyrella spp., and P. candolleana) (Ogura-Tusjita and Yukawa 2008, Yamato et al. 2005). Acholorphyllous orchids are also known to associate with the fungal genus Armillaria, which is a known saprotroph and plant parasite (see White Rot disease).

Although the seminal paper describing mycoheterotrophy dates back to 1888, surprisingly little is known about this fascinating plant-fungal interaction. This section provides a review of some recent advances, as well as highlights reviews of tantalizing unknowns--and future research directions.

The current paradigm in mycoheterotrophy celebrates the "unprecedented specificity" between plant and fungus. However, a recent study has demonstrated that some mycoheterotrophic plants are host-generalists, parasitizing multiple ectomycorrhizal taxa. Hynson and Bruns (2010) report that adults of ericaceous plant Pyrola aphylla can associate with as many as 15 fungal taxa. While previous studies have demonstrated that the mycoheterotroph seeds can germinate when exposed to innocula from multiple fungal species, this is the first study demonstrating that a plant can complete its life cycle without a specific fungal host.

The shift between autotrophy and mycoheterophy in mixotrophic orchids may be fine tuned to light availability, even on short time scales. Preiss et al. 2011 exposed partially mycoheterotrophic species from the genus Cephalanthera to varying levels of irradiance. They find that the relative contribution of autotrophy and fungus is fine tuned to light availability, a finding that generally blurs the categories of partial and facultative mycoheterotroph (see mixotrophy).

A recent review issue of New Phytologist (2010) highlighted some important unknowns in the ecophysiology of mycoheterotrophic plant-fungal interactions.

(1) It is unknown whether the presence of mycoheterotrophic plants decreases the fitness of their host-fungus relative to unexploited, sympatric fungi.

(2) It is unknown how mycoheterotrophic plants recognize fungal hosts. The search for a general Myc factor, or signal molecule responsible for establishing the interaction and carbon and/or mineral nutrient exchange, continues. Have mycoheterotrophs co-opted signal molecules used to establish mutualistic mycorrhizal associations, or do they employ unique chemical signals?

(3) It is unknown what functional genes are associated with the mycoheterotrophic interaction, in either the plant or fungus.

Hynson, N.A., and T.D. Bruns. "Evidence of a myco-heterotroph in the plant family Ericaceae that lacks mycorrhizal specificity". Proceedings of the Royal Society of Britain. 2009. Volume 276. p. 4053-4059.

Edited by Brian Steidinger, a student of Angela Kent at the University of Illinois at Urbana-Champaign.