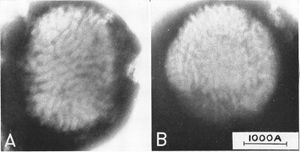 The myxoma genome is 161.8-kb long consisting of 171 unique genes (1F) making up this large, linear double-stranded DNA virus. The myxoma virus has a brick shaped viron and replicates only within the cytoplasm of the host cell (1).This enveloped virus is a member of the Poxvirus family and is of the Leporipoxvirus genus (3). The myxoma virus genome has terminal inverted repeats and covalently closed hairpin ends. The genes near the termini are not necessary for replication but are important in the virus’ virulence in infected animals (2).

The european rabbit (Oryctolagus cuniculus) is the host of the Myxoma virus (6).

The host of the myxoma virus is European rabbits (Oryctolagus cuniculus). In this specific host, the myxoma virus causes a deadly infection called myxomatosis. The myxoma virus can infect other types of rabbits (including the American rabbit, Oryctolagus cuniculus), but only causes myxomatosis in European rabbits (5). In Britain, the major vector is the rabbit flea, whereas in Australia, the vector is the mosquito (10). The virus causes a tumor at the infection site of the rabbits and causes swelling of the adjacent connective tissues. Secondary myxoma tumors are found on other areas of infected rabbits (5).

The myxoma virus has a M-T7 protein that is specific in that it specifically binds rabbit IFN-gamma. By doing this, the M-T7 protein inhibits a regulatory cytokine that controls the host’s immune response to viral infections. This makes the M-T7 protein a critical virulence factor in the progression of myxomatosis (9). The M130R protein and SERP1 gene are also important virulence factors. The M130R protein is necessary for complete and lethal development of the myxoma virus. Without the M130R protein, the host immune system is able to respond and control the lethal effects of the virus (14). The SERP1 gene interacts with cellular components involved in the regulation of inflammation. When this gene is absent the infection resolves more rapidly due to a more effective inflammatory reponse (15). There are also several ways that poxviruses increase the virus' ability to survive in the wild. These mechanisms can involve the interference with major histocompatibility complex antigen presentation, inhibition of apoptosis, disruption of complement cascade, and inhibition of cytokines (2). Specifically, the myxoma virus uses inhibition of apoptosis to increase the virus' ability to survive in the wild. This inhibition of apoptosis is accomplished through the M11L genes which extend the host range and increases myxoma survival in the wild (18).

In places like Italy, rabbits can be vaccinated against the myxoma virus. It is accomplished by injecting rabbits with attenuated strains of Borghi or SG33 (16).

Current research is investigating the effect of the myxoma virus on cancerous tumors in mice. The myxoma virus was injected multiple times into cancerous tumors of mice. The viral injections resulted in a decreased size of the tumors (specifically B16F10 tumors). Additionally, systemic treatment of mice inhibited the development of lung metastasis. Mice were exposed to B16F10LacZ cells that cause lung metastasis and the mice that were treated with the myxoma virus did not develop observable tumors (11).

A current study investigated reasons as to why the myxoma virus has not spread throughout North American species of rabbits. The Sylvilagus audubonii and Sylviagus nuttallii species were injected with the South American strain (Lu) and the Californian strain (MSW). After injection of the South American strain, neither species developed classical myxomatosis that can be observed in European rabbits. The Californian strain of the virus (MSW) replicated at the inoculation site, but did not show any signs of a disseminated infection. The virus did not reach transmissible titres in either of the species tested. This helps explain why the Californian myxoma virus has not yet spread throughout North American species (13).