Characteristics of the pathogen 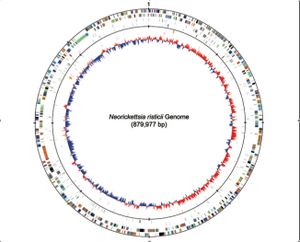 Neorickettsia risticii, formerly called Ehrlichia risticii, belong to the Anaplasmataceae family, the Rickettsiales order, and the Neorickettsia genus. N. risticii was discovered in 1979 during an outbreak of Potomac Horse Fever along the Potomac River in Maryland and Virginia. It is a gram-negative, coccus, and obligate bacterium [3]. N. risticii was demonstrated to be the sole causative agent of Potomac Horse Fever, also known as Equine Monocytic Ehrlichiosis, by fulfilling Koch's Postulates in 1985. 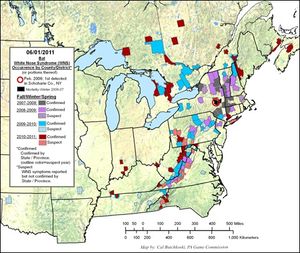 Equus caballus, or the horse, host of N. risticii

The target host for pathogenesis is Equus caballus, or the horse. N. risticii, however, being an obligate bacterium has to live within another organism for it to be able to survive. It usually lives in aquatic insects, such as the caddisfly, mayfly, dragonfly, etc. or in trematodes. The relationship between N. risticii and trematodes is parasitic, but the relationship between N. risticii and the different aquatic insects is unknown. [5] 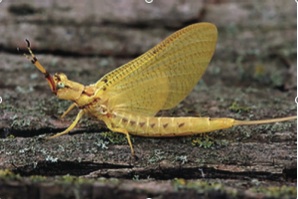 A Mayfly, one possible vector of Neorickettsia risticii [6]

The interaction between N. risticii and the horse is a pathogenic one. Infection of a horse with N. risticii causes Potomac Horse Fever, also known as Equine Ehrlichial Colitis, an acute and potentially fatal disease. [2]

N. risticii is an obligate parasite, meaning it cannot survive without a host. It uses a reservoir, most commonly a trematode species, with two life stages in intermediate hosts. In its ﬁrst stage, the trematodes, Acanthatrium oregonense [8], parasitize water snails. During periods of warm water temperatures, cercaria infected with the organism are released from the snails, infecting and developing into metacercaria in the second intermediate host, aquatic insects. Caddisﬂies, mayﬂies, damselﬂies, dragonﬂies, and stoneﬂies have all tested positive for N. risticii. It is through ingestion of trematode larvae or one of these aquatic insect vectors that the horse becomes infected with N. risticii and contracts Potomac Horse Fever. [6]

Once inside the horse,the bacteria colonizes in the epithelial cells of the horses intestines, monocytes in the blood, and macrophages in the lymphoids and other tissues [5]. N. risticii infection causes many adverse symptoms such as anorexia, fever, depression, diarrhea, lethargy, and in some cases laminitis. N. risticii is also known to cause miscarriages in pregnant horses. [5]

A 51-kDa protein, P51, is the specific antigen recognized in horses with Potomac Horse Fever. P51 is encoded by the p51 gene, which is not found in any other bacteria, and has been found in all N. risticii strains identiﬁed to date. P51 is most likely to be a surface protein. [1]

Neorickettsia sennetsu is another bacterium in the same family as N. risticii that causes Human Sennetsu Rickettsiosis. Despite very close genome symmetry between N. risticii and N. sennetsu, 140 and 177 genes are unique to each organism, respectively. N. sennetsu is not pathogenic to horses, and inoculating horses with N. sennetsu actually acts as a vaccine for the horse against Potomac Horse Fever, preventing the horse from being infected with N. risticii. [1]

This disease is most to likely to be contracted in the late spring and summer when the water temperature rises. This is due to the fact that the aquatic insects are laying eggs and reproducing, same with the trematodes, and N. risticii is vertically transmitted in these vectors [8]. This gives N. risticii more reservoirs to thrive in, and ultimately increases a horses chances of drinking water carrying a contaminated insect or trematode. [6]

Location also has an effect on whether or not a horse has a chance of being infected by N. risticii. The vectors are aquatic, and have to have warm and mild climates for optimal fitness. This makes places in the United States like Virginia, Maryland, North Carolina, Pennsylvania, and other eastern states common locations of Potomac Horse Fever outbreaks. Outbreaks have also been reported in California and Europe [2].

Wind also can play a role in infecting horses with N. risticii. High winds can blow dead carcasses carrying the bacteria around which can then be inhaled by the horse. Artificial light sources can also attract insects to environments where horses can easily inhale them such as bright lighting in barns as well as heat lightning in the pastures at night. Horses that contract Potomac Horse Fever do not just contract it from drinking contaminated water. [6]

Another recent discovery is that the bacteria in the order Rickettsiales are the bacteria most closely related to the eukaryote mitochondria. Also, out of the Rickettsiales N. risticii and its two other Neorickettsia family members have the smallest genomes, which has been linked to increased pathogenicity . [9]