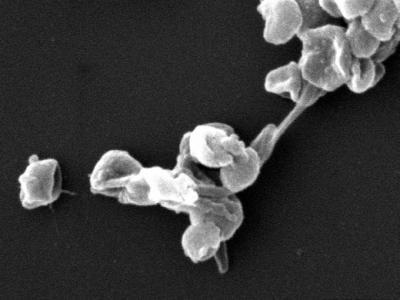 The sequence divergence of N. viennensis's 16s rRNA gene from its closest relative, Nitrososphaera gargensis, is 3%(3).

The urease gene cluster was located in one strain of N. viennensis, EN76(3). The cluster consisted of the encoding subunits ureA, ureB, and ureC and the accessory proteins ureE, ureF, ureG, and ureD(3).

N. viennensis used urea or ammonia as an energy source in laboratory conditions(3). It is able to grow chemolithoautotrohically with inorganic compounds as an electron donor, but displayed higher growth rates when grown with bacteria or with the addition of 0.1mM pyruvate(3). It is currently unclear whether it is capable of heterotrophic or mixotrophic growth.(3). The addition of vitamins, amino acids, and sugars had only a marginal effect on growth(3). Acetylene is a possible growth inhibitor(3).

Its optimal temperature is 35°C with an optimum pH of 7.5(3). Generation time of a pure culture with 1mM ammonia and pyruvate was about ~45h(3). Cell densities reached 5 X 107 cells mL-1(3). Growth on cultures with ammonium alone slowed down to ~23d demonstrating it can grow autotrophically exclusively although very slowly(3).

The electron transfer process is not fully understood yet in ammonia oxidizing archaea(2). The amount of ATP per mole of NH3 is unknown since it varies depending on growth stage and other factors(2). Lack of cytochrome c proteins and many copper-containing proteins suggest a different electron transport mechanism than ammonia oxidizing bacteria, which is iron-heme-dependent(2).

N. viennensis exists in soil globally(2). The first N. viennensis strain isolated was from garden soil from the University Center at Althanstrasse in Vienna's 9th District(4).

Ammonia oxidizing Archaea such as N. viennensis may contribute to the nitrification of the environment(3). It was previously believed only Bacteria could oxidize ammonia(3). Ammonia oxidation is the first step in denitrification (NH3 to NO2-) (2). Eventually N2O is produced in this process and escapes into the environment (2). N2O has a greenhouse warming potential 310 times higher than CO2(2). It is responsible for 5%-7% of the greenhouse effect(2). It is the third most important greenhouse gas after CO2 and CH4(2). Ammonia oxidizing Bacteria and Archaea are estimated to contribute to ~70% of global N2O emissions(2).