The genus Nocardia was first discovered by Edmund Nocard, a French veterinarian, in 1889, as the main cause of bovine infections [1]. The species of Nocardia genus are gram-positive and rod-shaped bacteria. Different species can range have colony colors from white, to tan, orange and even red in color. Colonies appear to be smooth or moist, and can have a "mold-like" appearance. These microbes are no more than 2 microbes in thickness and length. They are reliant on getting their nourishment from dead and/or decaying organic material, making these bacteria saprophytic. Nocardia are commonly found in soils, plants, animal tissues, and human tissues [2].

The bacteria in this species have been common to diseases. Nocardiosis, the most common disease associated with these genus, which is an infection disease affecting either the lungs or the entire body. Also, the inhalation of Nocardia species can lead to pneumonia, as well as skin infections if they enter through open wounds [3].

Nocardia species have been closely related to species from the genus Rhodococcus. There are 14 hypothetical conserved proteins that are unique to Nocardia and Rhodococcus. [4] 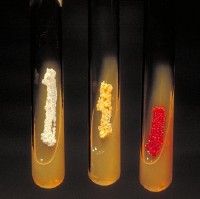 Nocardiagrow slowly on nonselective culture media, and are strict aerobes that can grow at a wide range of temperatures. These bacteria can be cultured and colonies become evident in about 3-5 days, but sometimes a prolonged incubation period of 2-3 weeks is necessary to see colony formation. They grow on carbon rich soils, plants, and animals. Once it lands on its host, it immediately begins metabolizing tissues for energy or nutrients. [5]

Nocardia related infections have a high mortality rate and are resistant to treatment. They are particularly harmful in patients that have suppressed immune systems, similar to those with HIV or patients that have recently gone through a transplant procedure. Some drugs that currently show any effect against this genus are ketoconazole, clotrimazole, and miconazole. [6]

This genus was only sequenced three years ago, so it seems reasonable that there has not been any clear evidence of significance just yet. As research continues that may change. 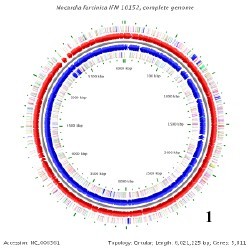 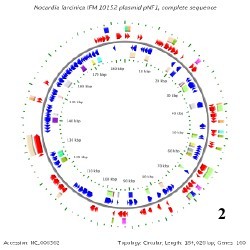 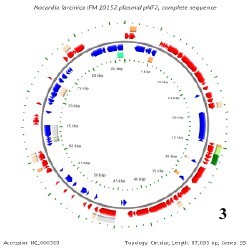 A secondary metabolism has been studied, and describes the high quantity of oxygenases found in the genus. It proposes that the purpose might be for fatty acid metabolism, or a defense system against toxins. [8]