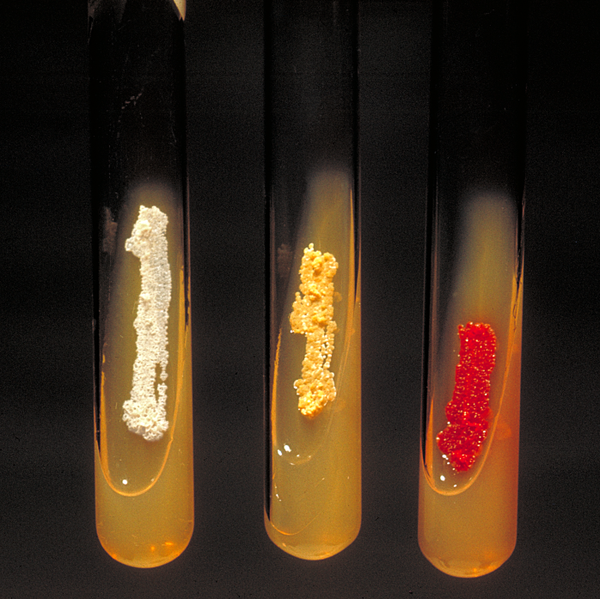 Species of Nocardia genus are Gram –positive. Nocardia asteroides are found worldwide and they are saprophytes, they live on dead decaying organic matter in the soil, water, dust and on vegetation .They are important in the soil because they break down dead and decaying organic matter into simple substances that can be taken up and recycled by plants. Nocardia asteroides appear as filaments and their colonies usually appear yellowish in a slant culture media as seen from the Images below [1, 4, and 7].

The complete genome structure of Nocardia asteroides is not available to the public. The total genome size of Nocardia asteroides is 7.5 Mb with a large linear plasmid of 220 kb. It is known though that Nocardia asteroides drug pattern VI strain is 99.5 % genomically identical to Nocardia cyriacigeorgica in HSP gene sequence [4]. There are only two differences in a 373-bp region; the amino acid sequences are identical in both of the above Nocardia species. Nocardia farcinica is the Nocardia species with a complete genome that is available to the general public. It has one circular chromosome and two circular plasmids .Its circular chromosome consists 6,021,225 bp and circular plasmids, pNf1 and pNF2 consists of 184, 027bp and 87,093 bp respectively [2, 4].

Since Nocardia is a soil bacterium, it uses different compounds as its source for carbon and energy. The primary source energy for Nocardia asteroides is acetate and gluconate while its source of carbon and nitrogen is sucrose and acetamide.During nitrogen assimilation glutamate and glutamine is formed .Nocardia asteroides uses the GS/GOGAT pathway to form glutamine which contains the enzymes glutamine synthetase and glutamate synthetase which catalyzes glutamate from α-ketogluterate and ammonia [1, 7].

Vibrio mimicus is a Gram-negative bacterium that is an indigenous member of diverse aquatic environments, including seawater, freshwater, and brackish water, where it has been found both as a free-living bacterium and in association with zooplankton, crustaceans, filter-feeding mollusks, turtle eggs, and fish. [2, 5, 6, 7, and 8].

Nocardia asteroides live on dead decaying organic matter in the soil, water, dust and on vegetation. Nocardiosis is a chronic bacterial disease of humans and many other animals originating in the respiratory tract and disseminated by way of blood to other organs. It is caused by either introduction of the species into the skin or by inhalation of the species from its habitat. Nocardia asteroides accounts for 86% of systematic nocardiosis in humans and 98% of cerebral nocardial abscesses and 2% of all cerebral abscesses [1, 3, and 6]. The majority of infections occur in patients with weakened cell-mediated immunity. Patients commonly also include those who have received bone-marrow transplantations and are on immunosuppressive therapy, those with HIV/AIDS, and those with malignancies [1, 7]. The disease usually begins with malaise, loss of weight, fever and night sweats. Nocardiosis is found worldwide in persons of all ages. Nocardia species are generally resistant to penicillin and require six months to one year of antibiotic treatment. Early treatment of nocardiosis with sulphonamide drugs before the disease has spread to the brain has reduced the mortality rate from nocardiosis. [1,7]