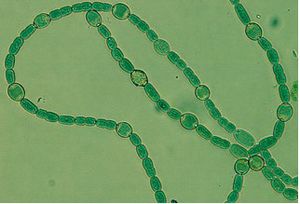 Nostoc azollae, from the genus "Nostoc", is a cyanobacteria (1), meaning it is a phototrophic organism that creates its own energy through photosynthesis. The microbe grows as unbranched filaments and differentiates itself into three seperate types of cells. The first are heterocysts, which differentiate in response to nitrogen deficiencies, and act as sites of fixation for the environment. These make up anywhere from 3-10% of the microbe's cells. N. azollae is also capable of creating two other kinds of cells. It can form hormongia, consisting of short filaments that allow movement, and spore-like akinetes that allow the cell to undergo dormancy (2).

The significance of the microbe is found within its symbiosis with Azolla filiculoides, a type of plant native to warm tropical regions all across the globe (3). The fern possesses numerous small cavities all along its surface that house N. azollae and allow for the transfer of nutrients between the two symbionts (4). 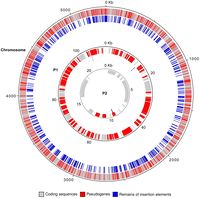 Figure 1: Map of the main chromosome and plasmids of N. Azollae (1)

Sequence and Size:
Only a few strains of N. Azollae have been sequenced, chiefly Nostoc Azollae 708 (Figure 1), which had a genome size of 5.84 megabytes (6). N. Azollae possessed a small G+C content of only 38.3%, and carried with it 4 rRNA clusters alongside 44 tRNA species, making up the full set of amino acids. Intact genes within N. Azollae compose 52% of the genome, which is the lowest of any cyanobacteria sequenced thus far, owing partly to the massive amount of pseudogenes that comprise the rest of the genome. In addition, N. Azollae has the some of the lowest intact CDS (protein coding sequences) counts of any similar cyanobacteria sequenced (1).

Interesting Features:
The genome contains 2 plasmids, and is approximately made up of 31.2% Pseudogenes, most likely due to its nature as an integral symbiont. N. Azollae is considered an obligate, usually surviving in the highly sheltered environment provided by its host. The current information from the sequences suggests that the genome is degrading even today (1). Among the psuedogenes is the DNA replication initiator, implying N. Azolla has difficulties in reproduction. The current genome suggests that the role of N. Azollae as a nitrogen fixation microbe has been made obligatory, which benefits its host most of all. Although N. Azollae can live beyond their host, it comes at great difficulty and stops their growth(1).

Cell Structure:
N. Azollae typically grow as filamentous, extracellular heterocysts. The cells are excellent sources of fixed nitrogen within their habitat, and it is estimated that these sites fix more than three times the amount of nitrogen than a legume-rhizobium symbiosis (4). In addition to heterocysts, N. Azolla is fully capable of forming two additional cell types, hormogonia and akinete, to assist in the vertical transfer of the microbe during the reproduction of its host (2). Hormogonia are smaller, motile cells that allow for movement for the cell, while akinete are smaller, dormant states of N. Azollae which carry its genes, allowing it to be passed on to the new potential host during reproduction (2).

Life Cycle and Metabolism:
One of the most fascinating aspects of N. Azollae is that it is vertically transferred from one host to the next, unlike nearly any sort of plant-microbe symbiosis seen. In effect, the two, both microbe and host, have co-evolved together for thousands upon thousands of years. The fern Azolla filiculoides grows at a fraction of the rate in the wild without its microbe partner, and N. Azolla cannot reproduce without its host (4). The degree to which the two parties depend on eachother, forming a partnership since birth, is astounding. For Metabolism, N. Azollae is a chemotroph, deriving its energy from sunlight, but it also gains a great deal of its essential nutrients from its plant host, who supplies it with fixed carbon while it in turn produces nitrogen (2).

Habitat:
N. azollae, like most of the Nostoc genus, inhabits freshwater, tropical, temperate, and polar terrestrial systems, but are rarely found in marine environments (2). The microbe can be found wherever its host lies, which while usually is limited to tropical areas all across the globe, in recent years Azolla f. has taken a more invasive turn, which means N. Azollae can be found even in decidedly non-tropical places in Europe such as Norway or Poland (3). Before the ice age the ferns and N. Azollae could be found throughout the globe, going as far north as the Arctic Ocean (7). The microbe is extremely dependent on its fern host for survival, and because of this is rarely found without its host in the wild, lacking many basic abilities otherwise made up for in symbiosis (4).

Symbiosis:
N. Azollae forms an incredibly important symbiosis with the fern Azolla f., one that has been co-evolving for millions of years (5). Depending on the microbe for nitrogen fixation, the fern has specialized organs within its leaves that give shelter and provide ample habitat for the microbe to live (Figure 2), and assist it in giving resources the microbe needs to survive while the microbe in turn provides nitrogen the plant can break down (2). Over the course of the last million years it's estimated that this symbioses has led to tens of trillions of CO2 being taken from the atmosphere, resulting in a cooler atmosphere and helping set the stage for the ice age (7). The nitrogen-fixation properties of the plant and microbe have not gone unnoticed by humanity, farmers even as far back as over a thousand years ago in China were known to introduce N. Azollae with its fern host to rice fields in order to improve the soil, an example of humanity using microbes in their daily lives long before they had any idea what they even were (7). Even today the partnership is still used in agriculture, with researchers looking at not only its soil effects but ability to ward of pests as well (7).

5. "A Native Cyanobacteria, Nostoc, as a Biofertilizer" https://digitalcommons.wku.edu/cgi/viewcontent.cgi?article=1467&context=stu_hon_theses