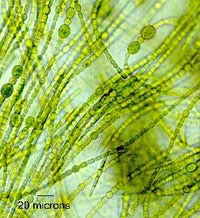 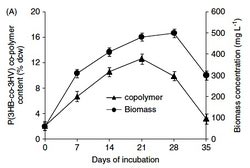 N. muscorum are important for the nutrient cycling of carbon and nitrogen within the soil ecosystems in which they are found. The process of fixing atmospheric nitrogen contributes plant-available nitrogen to the soil, improving plant growth (Rogers and Burns, 1994).

Soils inoculated with N. muscorum also show an increase in soil aggregate resistance to degradation during wetting and physical disruption (Rogers and Burns, 1994). This soil stability can help prevent soil erosion, contributing to a higher success of seedling emergence in soils containing N. muscorum compared to those without it (Rogers and Burns, 1994) (Cameron, 1960). The aggregate-forming properties of the microorganism also helps prevent desertification or the erosion of desert soils, where it is often present as part of cyanobacterial algal crusts (Cameron, 1960).

Current research with N. muscorum involves manipulating the cells’ formation of poly (3-hydroxybutyrate) (PHB) and poly(3-hydroxybutyrate-co-3-hydroxyvalerate) [P(3HB-co-3HV)] co-polymer as potential materials to use in bioplastics for general and medical applications (Bhati and Mallick, 2012). N. muscorum has the potential to be used in industrial settings which produce CO2 waste by using this waste as fuel under propionate- or valerate-supplemented conditions to form the above polymers for thermoplastic formation (Bhati and Mallick, 2012).

The genome of Nostoc muscorum has not been sequenced. However, other species of the genus Nostoc have been studied and contain one chromosome. The three species that have been sequenced, Nostoc punctiforme, Nostoc sp. PCC 7120, and Nostoc azollae, each contain plasmids. They have between 5.35 and 8.23 million base pairs in their sequences (NCBI). 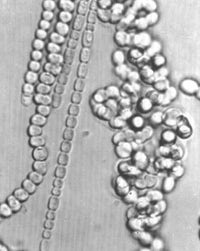 Nostoc muscorum is a phototroph, requiring CO2 for growth. It can also utilize glucose and sucrose for growth (Allison et al., 1937). N. muscorum has heterocysts, which are specialized nitrogen-fixation cells. Heterocysts, (5-10% of cells) appear when N. muscorum is transferred to nitrogen free media. Appearance of heterocysts is concurrent with an increase in nitrogenase activity, which reduces N2 to NH3 (Fleming et al.) Magnesium is also required for N. muscorum to carry out nitrogen fixation (Allison et al., 1937).

N. muscorum possesses a motile stage in its life cycle that allows it to maintain populations that follow areas of high light intensity through the use of hormogones, which are motile filaments (Rai et al., 2002). Formation of hormogonium is sensitive to metabolic products present as well as light intensity (K.Lazaroff, 1963), (Rai et al., 2002). Hormogonium is formed rapidly when containing glucose, and when sucrose is present, the breakdown of organized thalli and formation takes place only after prolonged incubation. (K.Lazaroff, 1963)

N. muscorum are tolerant of saline environments, with sugar products providing osmoregulatory activity in salt tolerance (Blumwald & Tel-Or, 1982). Heterocyst frequency drops immediately following exposure to salty conditions. When these cells collapse, nitrogenase synthesis stops and vegetative cells may go under osmoregulation. New heterocysts eventually recover after a short period of adaptation. Salt adapted vegetative cells about 2x as large as normal cells (Blumwald & Tel-Or, 1982). There are also drastic changes in the intracellular organization of the thylakoidal assembly. Thylakoid membranes, containing photosynthetic pigments, change their distribution patterns in cells when the cell is exposed to salt. Instead of concentrating on the outer edges, they become identically distributed throughout the cell volume (Blumwald & Tel-Or, 1982).

N. muscorum’s life cycle is dependent on the light conditions; cells of a coccoid form grow in the dark (aseriate stage) while cells of a filamentous form grow in light (seriate stage). The conversion from the aseriate to the seriate stage is photocontrolled by red stimulation and green suppression (Isono and Fujita, 1981) . N. muscorum has a fully active photosynthetic machinery even when they are grown in the dark. Thus, light can act not only as a signal for the photocontrolled phenomena but also as energy for cell growth. At higher light intensity and cell growth, there are a higher proportion of seriate cells. These features indicate that light mainly acts as the energy source for photosynthesis which enhances the cell growth. (Isono and Fujita, 1981)

N. muscorum is distributed over a large area of the globe in many varying habitats, both aquatic and terrestrial. Its ability to populate such a diverse range of conditions is due the cellular development of metabolic adaptations to harsh conditions, such as dessication-tolerance, salt-tolerance, and nitrogen-fixation processes. It is known to form symbiotic relationships with terrestrial plants and is common in desert crusts and benthic communities of water-logged paddy fields (Bhunia et.al, 1991). It has also been found in hot springs and newly formed volcanic ash, and is even found in the arctic and antarctic due to its ability to withstand freeze-thaw systems. It is the most common species of Nostoc in terrestrial ecosystems. (Dodds and Gudder, 1995)

In one alfalfa study by Gantar et. al, 1991, N. muscorum was found to colonize not only the roots of the alfalfa, but also the surfaces of the plant stems and leaves and the intercellular spaces within the leaves (Rai et al., 2002). The ability to spread to all parts of a plant when introduced in the root zone stems from N. muscorum’s mechanism of dispersal via hormogonia formation (Rai et al., 2002). The very different habitat needs and stresses involved in inhabiting such a large range of areas on a plant (ex: dessication and UV exposure on plant surfaces) showcases N. muscorum’s robustness. 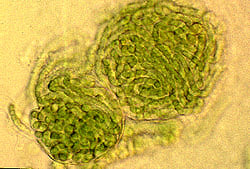 A large circular colony of N. muscorum. Image from: Prescott, 1962.

As such a widely distributed organism, N. muscorum’s interactions with the surrounding microbial community are also important. The Nostoc genus seems to be somewhat resistant to predation, probably due in part to their production of large amounts of sheath material and/or their formation of large colonies that are difficult to consume. Antibiotic production has been recorded for certain strains of N. muscorum, a feature which likely developed simply due to evolutionary interactions with bacteria. Cyanophage viruses have been shown to infect N. muscorum and depress nitrogenase and respirational activity. N. muscorum’s interaction with fungi is especially important in the formation of lichens in the terrestrial environment because of it’s ability to photosynthesize, withstand dessication, and fix nitrogen. Also, extracts of N. muscorum have been shown to inhibit growth of certain plant and human pathogens – the nature of which is not exactly known (Dodds and Gudder, 1995).

N. muscorum is known to have major impacts on soil structure, chemistry, and biology. Firstly, it improves the stability of soil aggregates, making soil environments less susceptible to disturbances such as floods, desiccation, and freeze-thaw cycles. This is important particularly in arctic soils which are subject to yearly freezing and thawing, in desert soils, which are dry and erode easily, and in rice paddies, which are constantly flooded (Dodds and Gudder, 1995; Cameron, 1960; Rogers and Burns, 1994). A greater amount of soil stability allows for more efficient aeration of soil as well as nutrient transport throughout the soil structure. In this way, N. muscorum is an ecosystem engineer, creating environments within soil that are suitable for microbial and plant growth (Rogers and Burns 1994). Both physical and chemical characteristics of N. muscorum enable the formation of stable soil aggregates. Its filamentous structure binds soil particles together. Also, exopolysaccharides and polypeptides secreted by this microbe form films of slime, which directly adhere to soil particles and act as a binding agents (Zulpa de Caire et al., 1997).

Several features of N. muscorum make it a successful soil inoculant. Its ability to obtain carbon and nitrogen from the air allows this microbe to avoid competition for these nutrients with other microbes and plants. This confers an advantage over heterotrophic soil inoculants which are usually limited by carbon (Rogers and Burns, 1994). It also benefits microbes and plants in its vicinity by increasing soil organic matter in the form of carbohydrates and adds nitrogen that can be assimilated by plants (Zulpa de Caire et al., 1997). Inoculation with this species has been shown to increase soil C content by 50-63% and N content by 111-120% as compared with uninoculated soil (Rogers and Burns, 1994).

Tolerance of disturbance by this microbe is an important feature that directly benefits plants and soil microbial communities. Nitrogen fixation is particularly important in flooded soils, like rice paddies (Rogers and Burns 1994). N. muscorum has a unique adaptation to allow it to thrive in these environments. When ionic concentrations decrease in the soil, usually due to freshwater influx, this microbe forms gas vesicles that aid in dispersal in flooded soils. Plants in these environments are then able to obtain sufficient amounts of nitrogen (Dodds and Gudder, 1995). Desiccation tolerance is similarly valuable, as the microbe can continue to provide nutrients to plants and microbes through periods of drought (Dodds and Gudder, 1995). N. muscorum also plays a role in primary succession, even colonizing newly formed volcanic ash. This helps to create an environment conducive to further growth and colonization by plants and other microbes (Dodds and Gudder, 1995).

Lazaroff, N. and Vishniac, W. “The Relationship of Cellular Differentiation to Colonial Morphogenesis of the Blue-green Alga, Nostoc muscorum A”. Microbiology 1964. Volume 35, No. 3 p. 447-457

Rai. A, Bergman, B., and Rasmussen, U. “Cyanobacteria in Symbiosis”. Springer Publishers 2002.