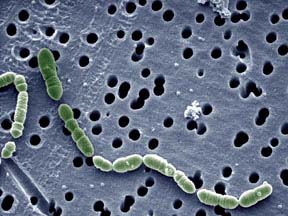 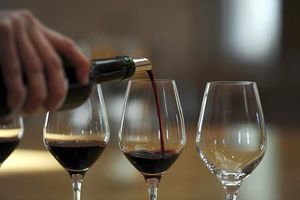 FIGURE 2. The style of wine depends on many factors: grapes, temperature, and notably the microbes that ferment the juice(9).

Oenococcus oeni (previously classified as Leuconostoc oenos) is a gram-positive, non-motile, chemoorganotrophic lactic acid bacterium that grows in chains of circular to ellipsoidal cells (2). Unlike many bacteria, it thrives in the harsh environment of wine and is considered beneficial microbe to certain styles of wine, typically adding to the wine's quality and character, rather an agent of damaging value (3). O. oeni is beneficial to wine and the entire field of oenology because of its primary ability to perform malolactic fermentation, the crucial secondary fermentation in the production of wine of converting malic acid to lactic acid. The end products of malolactic fermentation by O. oeni are responsible for the desired flavors that winemakers seek out. Though it occurs naturally in musts, wines, and fruit mashes, there are industrial standardized strains of O. oeni that are carefully cultured for large scale wine production (4).

In 1995, Dicks et al. sought to reclassify Leuconostoc oenos as Oenococcus oeni (Oeno- suffix, Greek for wine)because there is little DNA homology between the two genera (2). Oenococcus differs further from Leuconostoc in its abilities to use saccharose, lactose, and maltose as a substrate (5). In 2006, a second Oenococcus species was identified, Oenococcus kitaharae (6).

An industrial standard strain of O. oeni, PSU-1, has a circular genome of 1780517 basepair nucleotides, 1691 protein-coding genes, and 51 RNA genes (7). 43 tRNA sequences that represent 20 amino acids and 14 different insertion sequence transposase genes are present. Comparing different strains of O. oeni genomes, the general number of nucleotides tends to be very similar across the specie (7). The critical malolactic fermentation operates from the mleA gene, coding for the malolactic enzyme that breaks down the malic acid in the environment. Morphological and genomic evidence established the grounds to reclassify this bacteria as Oenococcus oeni. 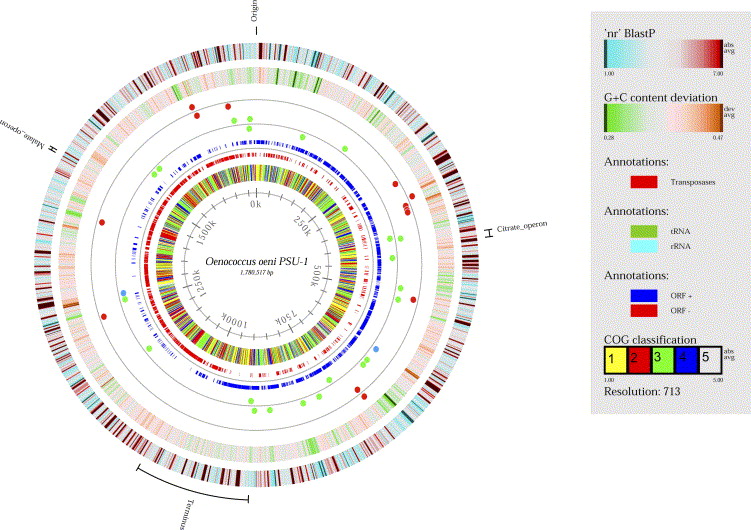 Oenococcus oeni is a facultative anaerobe. It is able to use oxygen for cellular respiration but can also gain energy through fermentation. It characteristically grows well in the environments of wine, being able to survive in acidic conditions below pH 3.0 and tolerant of ethanol levels above 10% (2). Optimal growth occurs on sugar and protein rich media, like grape or tomato juice. The cocci are ellipsoidal to spherical in shape, usually grow in chains or pairs, and are typically non-sporulating. Lactic acid bacteria, like Oenococcus oeni, perform malolactic fermentation (also known as malolatic conversion). It occurs after (or sometimes during) primary fermentation. The main function of malolatic fermentation is converting glucose and malic acid to lactic acid. This is occurs by the uptake of malate, decarboxylation of malate to L-lactic acid and carbon dioxide, and the export of end products. O. oeni is heterofermentative, meaning it can create multiple end products from fermenting the sugars. In O. oeni’s case, it produces carbon dioxide, ethanol, and acetate, as well as characteristic flavor molecules like diacetyl. Strain variation of Oenoccocus oeni cellular processes can have significant effects on the community dynamics, fermentation, and overall quality of wine. Strain variation exists in sugar utilization pathways, phosphototransferase enzyme II systems, bacteriophage integration, and cell wall exopolysaccharides (3).

Oenococcus oeni stabilizes wine communities by consuming available nutrients and lowering potential growth of other microbes, but its malolactic fermentation can be beneficial or detrimental to the production of wine depending on grapes, climate, and style of wine. Variations between strains and fermentation conditions have the potential to impact general quality and production of wine. Industrial winemakers use a standardized strain of O. oeni, but the many external and environmental variables will dictate the success of the wine. O. oeni is not the only lactic acid bacteria that can perform secondary fermentation. There are a variety of lactic acid bacteria that can dominate bacterial community in response to temperature, nutrients, sulfur dioxide content, pH, ethanol levels, and inoculation densities. O. oeni commonly dominates secondary fermentation from its extreme tolerance to pH and ethanol levels. The molecule diacetyl is produced as a byproduct of lactic acid bacteria in secondary fermentation. In wine, the levels of diacetyl create buttery and caramel flavor notes. It is generated when there is little or no malic acid to be consumed so citric acid is used. This byproduct is sought out by some winemakers while it is avoided by others. Rarely do the diacetyl levels reach a point of spoiling the wine (10).

Because of its heterofermentive properties, Oenoccocus may be viewed as an ecosystem engineer. O. oeni plays a major role in establishing the environment for which other microbes will interact. Its end products and life strategies positively feedback into creating a more harsh environment for other microbes like yeasts and fungi while making the conditions more ideal for other lactic acid bacteria (5).

(4) Oenococcus oeni PSU-1. The Regents of the University of California