Omphalotus is a genus of fungi which produces clumps of mushrooms in damp, forested areas. Fruiting bodies are generally found at the base of trees in very large clusters. The fungi consists of a complex mycellium which degrades dead tree bark. All known species of Omphalotus are thought to be poisonous, and produce a traditional steam and cap mushroom. [1] [2] [4]

O. olearius specifically is a mushroom reminiscent of a chanterelle mushroom. Like the chanterelle, its fruiting bodies have an appealing taste and odor, leading many people to consume them. However, unlike the chanterelle, O. olearius contains toxic compounds which can cause severe stomach cramps, vomiting, and diarrhea. Its fruiting bodies have a characteristic bright orange color. In addition, it exhibits significant bioluminescence as well, which has resulted in it becoming known as the "Jack-o-lantern" mushroom. One point of interest is that the toxic compounds produced by O. olearius have been shown to contain an anti-cancer chemical which can be refined into a drug known as irofulven. Currently, the mechanism of irofulven's anti-cancer properties is not well-understood, but it appear to be unique from other anti-cancer agents. [1] [3] 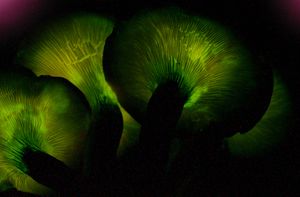 O. olearius, as stated before, macroscopically consists of a subterranean mycellium which decays dead organic matter. Because of this, like many fungi O. olearius is saprotrophic, which means that it digests its nutrition extra-cellularly. O. olearius is a chemoheterotroph as it decays dead organic material and cannot fix carbon. It relies on organic compounds, which act as electron donors for oxidation, which in turn produces energy it the form of ATP. [5]

O. olearius also uses the enzyme luciferase to bioluminesce. Luciferase acts upon luciferin in the gills of the fruiting body to exhibit a characteristic green-blue glow. This glow is most readily apparent in new fruiting bodies. It is best observed in complete darkness, as the glow is relatively faint and may take some time for the eyes to be able to perceive. The exact reason for O. olearius luminescense is not understood at this time, but it may be in part a mechanism to attract insects which will in turn distribute mushroom spores. It is also possible that the intention is to attract the predators of insects that would otherwise eat the mushrooms. [2] [4]

Native to North America, O. olearius is typically found in damp, wooded areas which provide ample nutrition in the form of decaying trees. It can be found on the trees roots, dead stumps, or at the bases of living trees. While not as poisonous as some other forms of fungi, ingestion of O. olearius fruiting bodies can result in sever gastrointestinal complications such as diarrhea, cramping, and vomiting. The primary agent responsible for these problems is Illudin S. Illudin S is a chemical in the class sesquiterpenes, which are terpene derivatives. In its natural form, Illudn S is highly toxic and non-useful. However, when inserted into cells, it has been shown to alter its structure in such a way as to block DNA transcription. This has resulted in the development of Irofluven, a derivative of Illudin S which exploits this DNA transcription blocking property to target cancer cells. However, this treatment is still in experimental stages. [3] 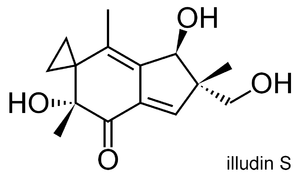 Page authored by Brett Hensrud, student of Mandy Brosnahan, Instructor at the University of Minnesota-Twin Cities, MICB 3301/3303: Biology of Microorganisms.