Owls have many characteristics that make them unique from other birds. They are able to hunt and mate at night, swivel their heads up to 270 degrees, and new research shows that they may be the first species that is able to communicate nocturnally. Their adaptations of nocturnal flight, eyesight, and communication calls interest to their adaptations, and why they would have evolved to have these traits. This page explains the unique features of the owl and also calls attention to the viruses, bacteria, and fungi that make owls possibly dangerous to come into contact with.

Owls are known for their unique ability to see in the dark. This allows them to hunt when most other predators are sleeping, giving them a unique advantage. Along with their nocturnal hunting ability, owls mate at night, and some owls have developed ways to communicate at night using light. For example, the male eagle owls have a white patch on their throat, which is presented to their desired mate during vocal displays and can reflect light from the surrounding area and be used to attract the female. The brighter the light coming from the patch of feathers on their chest, the more likely the female will be attracted to them. Researchers hypothesize that the eagle owl might be the first species to communicate nocturnally using light. This communication also plays a role in the natural selection of the eagle owl. It was found that eagle owls can spot intruders on their territory and defend their space, based on how bright the reflected light is from the invader's throat. The light was found to be a status signaling trait, so brighter reflecting patches were less likely to be attacked or defended against than eagle owls with less reflective patches. It was also found that the brightness of reflectance was positively correlated with a higher breeding output. [1] 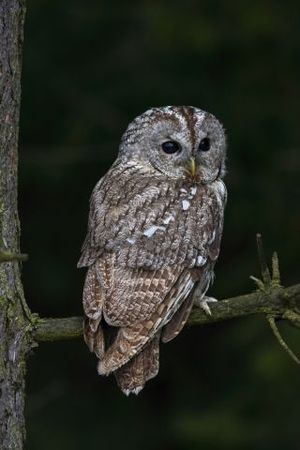 Figure 2. An Owl can rotate its neck up to 270 degrees. https://www.livescience.com/26771-how-owls-rotate-heads.html 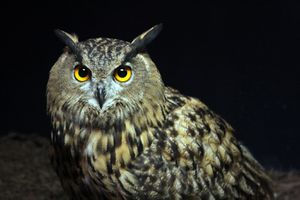 Figure 1. Eagle Owl, with a small white patch on its throat. https://cincinnatizoo.org/system/assets/uploads/2011/03/eurasian-eagle-owl.jpg

Owls are able to hunt at night based on sound alone. In order to do this, owls are born with the same basic wing structure as most birds, except the first primary feather on each wing is serrated, not smooth like in most birds. This allows the noise of the owl's flight to be silent. The serrated edges on the wings disrupt the sound of the air moving beneath and around them, so the owl is able to travel discreetly. This discrete flight makes it easier for owls to sneak up on their prey and attack them with more accuracy. Along with this, silent flight can save them from predators. If predators were hunting owls at night, they could fly away and avoid an altercation easily. [2]

Along with silent flight, owls have adapted to rotate their necks up to 270 degrees. This ability allows for owls to keep their eyes on their prey long after they would have left the field of vision of any competitor. In a study on neck rotation of the American barn owl, researchers used forced neck rotations of owl carcasses, along with virtual reconstructions of owl neck vertebrae to gather more information. They discovered that owls have 3 major sections in their neck: a horizontal lower part, an oblique middle part, and vertical upper part. These three parts form an S shape when the neck is relaxed. Twisting the neck showed the researchers that the lower region had mostly roll-like movements, the upper region demonstrated yaw-like movements, and the middle region was mostly stiff throughout the twist. Figure 3 shows an x-ray of an example of the movements of joints in relation to others as an owls neck is rotated. [3] 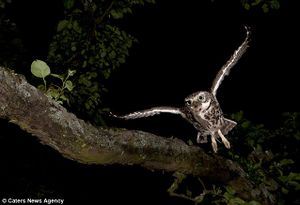 Birds are one of the main causes of pathogen spread across the world. This can be due to their worldwide flight, and their abilities to migrate and endure changing temperatures and habitats. Owls and other birds are able to carry bacteria that humans can also house, so it makes it easier for pathogens to be spread from one to the other, whether there is a third party involved or not. Viruses like the West Nile virus have been found to be transmitted from birds to humans through songbirds, house finches, and other species, including owls in Africa, Europe, Asia, and America. However, viruses are not the only things that can be transmitted to humans from birds. The fungi Cryptococcus has been found to also be transmitted to humans through wild pigeons and Psittacine birds in Europe, South America, and Asia. These are just examples of indirect transmission from birds to humans. There is also potential for a third party to be involved in passing on the bacteria, virus, or fungi. Other organisms like ticks and mosquitos can be vectors in the passing on of a pathogen, along with water and fish. [4]

Overpopulation of humans, along with deforestation and climate change is changing the habitats of owls and other species. Humans are knocking down the trees owls live in to survive, and are taking over the forests that are their homes. This forces them to live in an enclosed space that cannot support the number of owls that already live there along with the new members that flock to safety. This causes the population of owls go down with deforestation [5], and with humans moving closer to the owls and their forests, it is more likely that humans and owls will come in contact either directly or indirectly. This increases the likelihood of bacteria, fungi, and viruses being transferred from owls to humans, creating more opportunities for sickness in the human population as a whole.

With silent flight, nocturnal communication, and a 270-degree head swivel, owls have evolved to occupy a very specific niche. They have nocturnal abilities that no other species is known to have, giving them a unique advantage. However, deforestation, climate change, and overpopulation is a serious threat to owls, and other species. Their habitats are being taken away, forcing them to move to already crowded environments. This may cause owls to evolve more rapidly and adapt to change with their changing environment, or it may cause a drastic decrease in the number of owls on the planet.