Paenibacillus polymyxa is an endospore-forming bacterium that is non-pathogenic and found in environments such as plant roots in soil and marine sediment [1][2]. P. polymyxa is a Gram-positive, rod-shaped bacterium [3], that is also motile. It achieves motion via peritrichous flagella [3]. The wide range of capabilities of this bacterium are to fix nitrogen, produce hormones that promote plant growth, produce hydrolytic enzymes, and to produce antibiotics against harmful plant and human microorganisms [4]. It can also help plants in absorption of phosphorus and enhance soil porosity [5]. This microbe has a role in ecosystem function and potential role in industrial processes [4].

In agricultural ecosystems P. polymyxa can promote plant growth through three mechanisms. The first mechanism is production of hormones like cytokinins, auxins, ethylene and gibberellins [5]. These compounds increase root expansion and plant growth. The second mechanism is production of antibiotics and promoting immunity of rhizosphere. Heulin et al. (1994) observed that antagonistic activity of P. polymyxa decreased the activity of two plant pathogenic fungis (Gaeumannomyces graminis var. tritici and Fusarium oxysporum) [6]. The third mechanism is the bacterium's nitrogen fixing ability that can produce a form of nitrogen (ammonia NH3) that is usable by plants from atmospheric N2. In addition, soil fluctuation and porosity is improved due to organic compounds released from P. polymyxa into the soil [5].

The wide ranges of applications of P. polymyxa in industry are due to secondary metabolites produced by this bacterium. The antimicrobial compounds are effective against a wide range of Gram-positive and Gram-negative bacterial species therefore the bacteria can be used in biopreservation of food and medical applications. Metabolites such as polymyxin E1 and a lantibiotic also decrease the colonization of pathogens in poultry and shrimp larvae [4]. The other area of application of metabolites produced by the bacterium is bioflocculation caused by metabolites such as 2,3-butanediol (BDL). The bacterium has also been used for separation of hematite, pyrite and chalcopyrite [7]. Waste and tap water treatment and fermentation are other areas of industrial application of P. polymyxa. 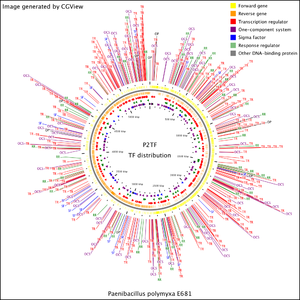 Paenibacillus was originally classified under the genus Bacillus until it became its own genus in 1993 [8]. This distinction was made using comparative analysis of the 16S rRNA gene sequence of three different bacilli which showed enough phylogenetic distance from Bacillus subtilis to warrant a new genus [8]. Paenibacillus (paene + Bacillus) means almost Bacillus in Latin. 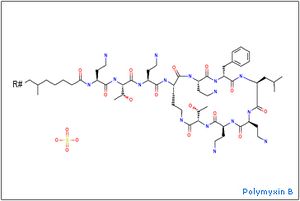 P. polymyxa is an anaerobic nitrogen-fixing Gram-positive bacterium that is rod-shaped, 0.6 by 3.0 μm in size, and produces pale colonies on agar [3]. For reproduction it differentiates into ellipsoidal spores which distinctly swell the mother cell. The endospore can germinate when conditions are more suitable [11]. Spore germination of P. polymyxa can be influenced by many factors including heat activation and nutrients such as fructose plus L-alanine [11]. Organic acids can also affect the heat resistance of spores [16]. When P. polymyxa isn’t in an endospore form, it has peritrichous flagella that aid in motility and swarming [3].

P. polymyxa is a chemoorganoheterotroph that can fix atmospheric nitrogen and is a facultative anaerobe [12]. As a facultative anaerobe, it can perform aerobic respiration in the presence of oxygen or switch to fermentation when oxygen levels are low. It can use a variety of organic carbon sources such as glucose, sucrose, maltose, and arabinose and can produce a number of metabolites such as acetoin, lactate, and ethanol [13]. It is also a mesophile that grows optimally around 30°C and the optimum pH is around 4-7 [12]. P. polymyxa also has the ability to produce H2 gas as a byproduct during a fermentative process that is affected by both pH and temperature [14]. This fermentative process, called acetogenesis, yields acetate, hydrogen, and CO2, which can be used as precursors by methanogens to produce methane [14]. P. polymyxa has the unique capability of synthesizing antibiotics/antifungal compounds. Three of these compounds include polymxin, paenibacillin [3], and fusaricidin [15].

P. polymyxa is found in variety of environments such as soils, the rhizosphere of plants, and marine sediments [8]. In the rhizosphere, P. polymyxa has pathogenic traits against deleterious microorganisms (mainly fungi). It also has a symbiotic relationship with plants by invading their roots and forming biofilms [1]. Production of hormones and nitrogen fixation are other beneficial activities of the bacterium in soil and rhizosphere. P. polymyxa also has antagonistic activity against Vibrio species and many other human and animal pathogenic microorganisms [2]. Therefore, it has been used in production of commercial antimicrobials [17]. Polymyxin B, one of the antibiotics produced by P. polymyxa, is one of the compounds found in the common antibacterial topical cream Neosporin®. 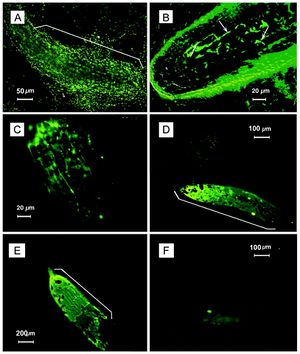 This bacterium produces secondary metabolites that have wide applications in agricultural ecosystems, biopreservation in food and medicine industry, bioflocculation in waste water and mineral processing [10].

P. polymyxa has a unique capability of protecting tomato seedlings from bacterial wilt [18]. Bacterial wilt is caused by Ralstonia solanacearum, a bacterium found in the soil that infects plants [19]. R. solanacearum invades the plant through the roots and colonizes in the vascular bundles in the xylem vessels [19]. As it grows and multiplies, it blocks the transportation of water and nutrients. P. polymyxa can prevent this bacterial wilt by colonizing and forming a biofilm around the roots of the tomato seedling, preventing the entrance of R. solanacearum.

Additionally, P. polymyxa can be used in the bioremediation removal of reactive blue 4 (RB4), a dye used on fabrics that is not readily removed from water by wastewater treatment processes [14]. Watanapokasin et al. (2008) observed decolorization with dye removal by P. polymyxa along with a hydrogen byproduct that could be used as a potential energy source. This decolorization occurred via a process called acidogenesis.