Pathogenesis of Lyme Disease and Gene Expression in Borrelia burgdorferi

Borrelia burgdorferi is the main bacterium that is responsible for Lyme disease, a tick-borne infectious disease. Since the late 1800s and early 1900s, cases of undefined infections were reported throughout Europe that would now be categorized as cases of Lyme disease [5] . However, it was not until the 1970s when Lyme disease became of interest to scientists. In Lyme, Connecticut, and its surrounding areas, there were reports of peculiar cases of arthritis during the 1970s. Because the cases were mostly children who played in wooded areas, especially during the summer months, researchers quickly found the correlation between Lyme disease and ticks. It wasn’t until the 1980s when researchers found the bacteria in ticks that were responsible for the infection. The bacterium was later named B. burgdorferi in respect to Willy Burdorfer, one of the researchers credited to its discovery [6]. Now, Lyme disease is the most prevalent tick-borne illnesses present in the Western Hemisphere [7]. Ticks infected with B. burgdorferi transmit the bacteria to the host organism where the bacteria then adapt to the organism’s immune system and environment in order to grow and divide. With B. burgdorferi 's painless and almost unnoticeable transmission until after the spread of the bacteria and the bacteria's adaptive mechanisms, diagnosis of Lyme disease is often delayed. Because of B. burgdorferi ’s effective survival strategies within a host, the lack of a working and available vaccine, and symptoms characteristic of other illnesses, Lyme disease is becoming a widespread public health concern.

Manifestations of Infection in Humans

Figure 1. The risk areas of contracting Lyme disease in the United States. By The Center for Disease Control and Prevention (website) [Public domain], via Wikimedia Commons.[1]

Cases of Lyme disease are found worldwide, but tend to be concentrated in certain temperate regions. Lyme disease is found most commonly in the Czech Republic, Germany, Finland, Estonia, Belgium, France, Slovakia, Hungary, Poland, Britain, Norway, and Scotland in Europe, British Columbia and Ontario in Canada, and the United States [10] . B. burgdorferi is characteristic to the United States, and different species of Borrelia , such as B. afzelli , B. garinii, and B. spielmanii, are responsible for Lyme disease in other places of the world [11] .

B. burgdorferi attaches to the host organism through the site of a Borrelia burgdorferi -infected tick bite and travels through the bloodstream. At the initial tick bite site, erythema migrans, a circular skin rash (Figure 2), usually appears within a month and can increase in size over time [12] . This stage of infection is called the early localized stage and is often accompanied by flu-like symptoms such as fatigue, body aches and fever [13] . The following stage, the early-disseminated stage, is characterized by symptoms of further infection. B. burgdorferi targets various body tissues such as the skin, motor joints, the nervous system, and the cardiac system leading to symptoms like body aches and persistent skin rashes [14] . For infected individuals that did not have the initial skin rash, these secondary symptoms are usually the first sign of infection and Lyme disease [15] The late stage consists of the same symptoms but with increased intensity, where in some cases can lead to arthritis and deterioration of the nervous system [16] . 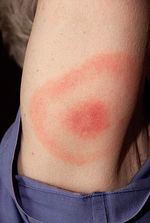 Many of the symptoms of Lyme disease in humans are stemmed from the immunological inflammatory responses of the bacteria in the affected areas [17] . When the body is attacked by foreign invaders, there are certain defenses that the body and its immune system employs. A potential way B. burgdorferi is able to avoid detection and therefore attack by the human immune system is through mimicry. It is possible that B. burgdorferi and self-proteins that are accepted by the body as its own, have been found to share similar epitopes, which would aid the bacteria to be perceived as unthreatening [18] . As another player in the immune system, neutrophils aid the human body in fighting infection. When B. burgdorferi colonizes inside the host’s body tissues, insufficient neutrophil activation and recruitment enhances the bacterium’s ability to survive in the host organism and surpass the immune system [19] . The interactions between the host's immune system and B. burgdorferi are essential to the pathogenicity of the bacterium, seen in the research that shows host antibodies are able to kill B. burgdorferi in lab settings but not in vivo [20] .The host’s immune system and its responses to the bacteria determine the extent of the bacteria’s pathogenic potency. B. burgdorferi's impact on various organisms such as mice, rabbits, hamsters, and monkeys have been widely studied. Different infectious consequences were seen in the different host organisms. Because of the varying laboratory results, Lyme disease is suggested to be more of a consequence of the host organism’s immunological responses to the bacteria rather than the bacteria’s strategy to be a pathogenic agent [21] .

Figure 3. The morphology of spirochete bacteria and its internal flagella. By Lamiot (Own work) [GFDL (http://www.gnu.org/copyleft/fdl.html) or CC BY-SA 3.0 (http://creativecommons.org/licenses/by-sa/3.0)], via Wikimedia Commons

The genome of B. burgdorferi is comparably small to other free-living bacteria, similar to genome sizes of parasites and relies on the host for necessary metabolic machinery [23] . The genome consists of a linear chromosome of 910, 725 base pairs and at least 17 linear and circular plasmids [24] . Because B. burgdorferi has a relatively small genome, the genes that are present are important for its success, where the genome has approximately 150 lipoprotein coding genes [25] and over 6% of its chromosomal genome is linked to its mobility [26]. 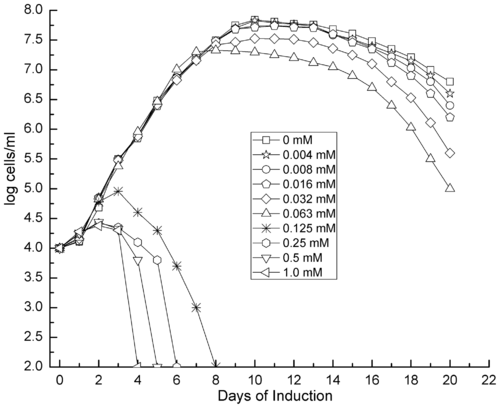 Surface proteins facilitate the interactions between the cell and its environment. B. burgdorferi is highly skilled in expressing certain surface proteins, altering the cell's interaction with its surroundings. In B. burgdorferi , two specific genes. the rpoS and rpoN genes, have been found to control signal cascades that regulate the assembly of various lipoproteins and surface proteins such as OspA and OspC, influencing communication with the environment and driving responses to changing conditions [27] . By inducing RpoS expression, various intracellular pathways are prompted, resulting in rapid growth in cell numbers until mass cell death [28] . The OspA and OspC protein production pathway are important to the development of B. burgdorferi infections. OspA is a lipoprotein at the surface of the cell membrane and the expression of OspA decreases and OspC increases during the initial bacterial infection of the host by the tick [29] . Higher levels of gene expression for the OspC protein are present in the nymphal stage of the tick life cycle than in the larvae and adult stages (Figure 5). [30] . Ticks in the nymphal stage are the primary agents of infection, which suggests that OspC might have a role in the bacteria’s pathogeny. B. burgdorferi's proficiency in gene expression allows for its proliferation despite changing environmental factors.

B. burgdorferi has the ability to transform into cysts in vitro and in vivo, triggered by environmental stressors. Oxidative stress and extreme pH in terms of both acidity and alkalinity resulted in rapid transformations into cysts [31] . The conversion to the cystic form from the normal spirochete structure demonstrates the ability of B. burgdorferi to alter gene expression and adapt to changing environmental conditions, allowing for an increased chance to survive in adverse conditions.

The Lyme vaccine: a cautionary tale Epidemiology and Infection

Edited by Jenny Han, a student of Suzanne Kern in BIOL168L (Microbiology) in The Keck Science Department of the Claremont Colleges Spring 2015.