Lyme Disease in the United States

The risk areas of contracting Lyme disease in the United States. By The Center for Disease Control and Prevention (website) [Public domain], via Wikimedia Commons.

The morphology of spirochete bacteria and its internal flagella. By Lamiot (Own work) [GFDL (http://www.gnu.org/copyleft/fdl.html) or CC BY-SA 3.0 (http://creativecommons.org/licenses/by-sa/3.0)], via Wikimedia Commons

Studies show that host antibodies are able to kill Borrelia burgdorferi in lab settings but not in vivo, suggesting that environmental cues present in host immune systems are essential to their ability to destroy the pathogenic Borrelia burgdorferi (Embers). The host’s immune system and its responses to the bacteria determine the extent of the bacteria’s pathogenic potency. Borrelia burgdorferi's impact on various organisms such as mice, rabbits, hamsters, and monkeys have been widely studied. Different infectious consequences were seen in the different host organisms. Because of the varying laboratory results, Lyme disease is suggested to be more of a consequence of the host organism’s immunological responses to the bacteria rather than the bacteria’s strategy to be a pathogenic agent (Tilly). Characteristics of Borrelia burgdorferi's such as gene expression of certain surface proteins that influence recognition and attachment of the cell make the bacteria capable of surviving the various levels and means of attack by the host’s immunological cells and molecules, especially in humans. 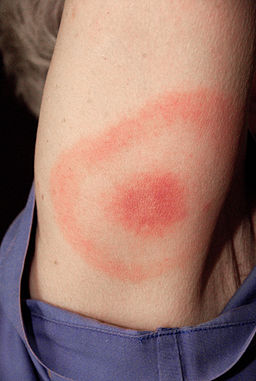 Borrelia burgdorferi is a slow-growing bacterium, which can result in delayed diagnosis of Lyme disease. Even if Lyme disease is diagnosed early, Borrelia burgdorferi can have the ability to stay dormant for extended period of time and return later in life of the host organism (Natural Medicines). The bacterium attaches to the host organism through the site of a Borrelia burgdorferi -infected tick bite and travels through the bloodstream. At the initial tick bite site, a circular skin rash usually appears within a month and can increase in size over time (Embers). This stage of infection is called the early localized stage. The following stage, the early disseminated stage, is characterized by symptoms of further infection. Borrelia burgdorferi targets various body tissues such as the skin, motor joints, the nervous system, and the cardiac system leading to symptoms like body aches and persistent skin rashes (Natural Medicines). The late stage consists of the same symptoms but with increased intensity, where in some cases can lead to arthritis and deterioration of the nervous system (Embers).

Edited by Jenny Han, a student of Suzanne Kern in BIOL168L (Microbiology) in The Keck Science Department of the Claremont Colleges Spring 2015.