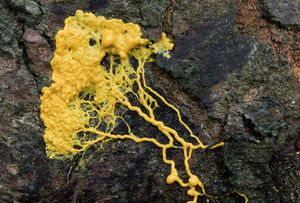 Close-up of P. polycephalum creeping over a pine bark in a Norfolk pine forest. This single-celled organism with multiple nuclei forages for food by sending out branches (plasmodia) from a central location. Photograph was taken by Nigel Downer on August 3rd, 2016.[1].

Physarum polycephalum is a species of acellular slime molds, or Myxomycetes. Despite having a similar name to fungi, these organisms are protists. They are most commonly found in soil, moist vegetation, and the forest floor where it is cool, damp, and dark, where they contribute to the decomposition of dead vegetation. P. polycephalum have very diverse forms of life in a single cycle, as they can range from being a microscopic single-celled amoeba, a multinucleated cell, or plasmodium, that can span several feet, morphing into a hardened mass known as a sclerotium, or forming small, delicate fruiting bodies that produce haploid spores.

Due to its unique life cycle and large plasmodium stage, P. polycephalum is used as a model organism for the studies of cell cycle regulation, cell differentiation, and cellular motility. A multitude of studies have been done on this species of slime mold in order to research and comprehend its methods of communication and apparent intelligence. It is currently unknown as to what the molecular and genetic properties of this organism are that make it capable of having awareness and decision making, as further studies are currently in the process of obtaining conclusive results. 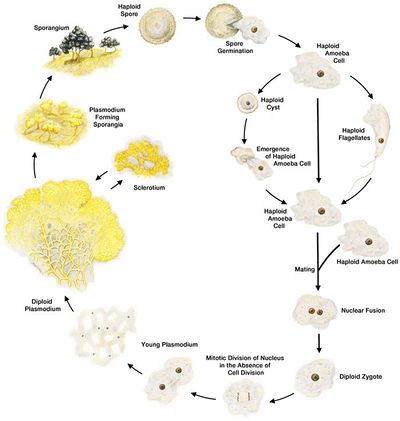 P. Polycephalum undergoes many changes during its life. The formation of its cycles is dependent upon environmental stressors and the presence or absence of other Physarum. 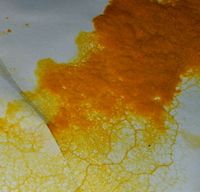 Sclerotium of P. physarum after being exposed to insufficient moisture and inadequate nutrients.[3].

The most commonly observed form of the Physarum polycephalum is its plasmodial form. The plasmodium is a large, singular cell with multiple diploid nuclei, each nuclei which undergo synchronous mitotic divisions, and the absence of cytokines.[1] These single cells can grow to a diameter of over a foot long as they continue to consume bacteria, fungal spores, and dead organic matter in its wild environment. When in nutrient-rich agar or other liquid cultures, plasmodium cells will readily grow axenically, no longer needing to engulf microbes to aid in the decomposition of organic matter.

If a starving plasmodium is in the presence of light, it will differentiate into sporangia; clusters of spores atop the tips of stalks. In its natural environment, this would be when the Physarum emerges from under organic matter such as leaf litter on the forest floor.[2][3] The organism can survive for much longer in this formation, because of the spores' higher resistance to environmental stress because of its layered cell wall. Many types of organisms across the tree of life undergo sporulation, especially plants and fungi. The spores of many Myxomycetes, such as P. polycephalum, have smooth spore walls covered with protectives spikes.[4] Unlike the dormant state of the sclerotium, sporangia is an irreversible pathway that the plasmodium transitions into. Haploid spores are created by the process of meiosis during sporulation, these spores remain dormant until agitated and in the recurrence of favorable conditions. The haploid spores will break away from the tip of the stalk and, upon germination with sufficient moisture, develop into haploid amoeba cells.

The germination of haploid spores gives rise to uninucleate amoeba cells, or in an aqueous environment, they will develop into flagellate cells, a process that is reversible. When two haploid amoebae mate, they undergo nuclear fission to create a diploid zygote. The zygote then undergoes mitotic division of the nucleus and results in a single cell with two nuclei, a young plasmodium. As the young plasmodium continues to collect nutrients and grow, it will undergo a series of synchronous mitotic nuclear divisions until it becomes a mature plasmodium.[5]

Physarum polycephalum are unique organisms that undergo various life-forms for the purpose of maintaining survival in the most efficient ways possible. The plasmodium form of these Physarum are heavily experimented on due to their fascinating behavior. P. polycephalum has shown remarkable attributes of memory, communication, and even intelligence within the plasmodium.

P. polycephalum have shown to exhibit a form of spatial memory within the plasmodium's environment. Amoebae motility is fostered by their ability to change cell shape. In response to external stimuli, the amoeboid cell, P. polycephalum changes its shape by extending and contracting arms, or pseudopods. It has been shown that the pseudopodal formation and exploration in P. polycephalum plasmodia differs in the presence of environmental toxins.[6] When a pseudopod comes into contact with a toxic chemical substance, it will retract and avoid the adverse environment and maintain this awareness, occupying previously explored areas with nutritional advantages.[6] 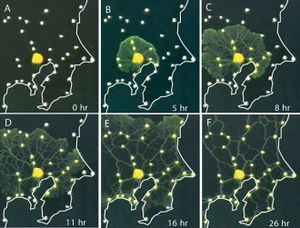 P. physarum creates a map of the Tokyo railway system.[5].

Slime molds like P. polycephalum are used as model organisms for understanding and researching the properties and function of collective behavior and swarm intelligence. Although Physarum are unicellular, they are formed from the fusion of haploid amoebas that undergo mitotic nuclear division. because of the absence of cytokines, the cell wall of the reproducing organism is never septated, resulting in a single, large, multinucleate cell. It is hypothesized that the nuclei within the cytoplasm of the plasmodium communicate through signal cascades which are comparable to the communication of animal groups that exhibit collective behavior and swarm intelligence.[7]

P. polycephalum utilizes cytoplasmic streaming - the flow of cytoplasm within the cell - in order to create a functioning nutrient transport network. The swelling and contraction of the microtubules that make up the entirety of the plasmodium efficiently constructs, evolves, and minimizes transport networks within the cell in order to achieve and maintain optimization between maximized nutrient flow and minimization of distance.[8] Many remarkable experiments have further studied the abilities of Physarum to optimize these network chains. A slime mold was put in an arena with sources of food to represent the location of each major city around Tokyo, Japan where its location was equivalent to. The slime mold was left for 26 hours to begin foraging for nutrients.[9] The Physarum constructed transport networks by covering the entire surface area in a thin layer of cytoplasm, evolved the network by the contraction of its microtubules in order to decrease the surface area, and finally minimized the transport network by refining the pattern and strengthening the tubules in order to allow for optimization between distance and nutrient content.[9] The nutrient network that the slime mold had created had many similarities to Japan's current railway system.[10] The difference is, however, that the map created by the plasmodium was much more efficient because of its intrinsic optimization.

(a) shows the maze uniformly covered by Physarum. Oatmeal is provided at the locations labeled AG. After a while, the mold retracts to the shortest path connecting the food sources as shown in (b)[7].

Slime molds have been shown to solve complex nutritional challenges. An experiment on a P. polycephalum plasmodia has shown the organism's ability to extend foraging arms to patches of varied nutrient composition in the precise proportions to compose an optimal diet.[11] Social insects, such as ants, bees, and termites, have shown this pattern of optimal foraging. For these congregate insects, however, the process involves specialized foragers to obtain food for the colony as a whole. The P. polycephalum plasmodia do not undergo optimal foraging via the same process as a plasmodium is a singular cell. Despite not having a centralized system, the plasmodia were still able to maximize their benefit from the nutrient complexes they were to choose from.[11] The mechanism that allows the organisms to respond precisely to these nutritional cues remains unknown as future studies have yet to be concluded.

These Physarum have been observed solving mazes with astounding results. P. polycephalum do not solve mazes using the same methods that humans would, however, the organism has been shown to come to the same results. Plasmodia can solve mazes with the process of minimization of transport networks for nutrient consumption.[7][8] Maze Experiments were done using Physarum as a test subject where the organism was placed at the beginning of a maze and oat flakes were placed at the end.[12] Humans would complete the maze by drawing a line from point A to B, but the slime mold was able to solve the maze by branching its microtubules over the entire surface area of the arena, and contracting its walls until its foraging arms reach the food inside the constraints of the maze with the least amount of distance.

Physarum polycephalum appears to exhibit memory, communication, and intelligence, which strikes a remarkable discovery as it may redefine the way we characterize intelligent life. The intrinsic ability of optimization that P. polycephalum possess can be used for a multitude of technological advancements and biological developments. Humans could find a way to harness the optimization of transport networks observed in the slime molds in the maze and mapping experiments. [12][9] The unique abilities and behaviors that the plasmodium possesses has led to many studies using P. polycephalum as a model organism for studies of cell differentiation and cellular motility. Although the underlying chemical and genetic reasoning for their unique behavior has not yet been understood, researchers are working to find the missing link that will likely help us to discover the key to optimization.