Planctomyces brasiliensis is are aquatic bacteria that belong to the Planctomycetales order, whose habitat are salt pits. Interestingl, they were mistakenly identified as a planctonic fungus(Lage and Bondoso, 2012). P. brasiliensis can be broken into two parts to better understand the meaning of P. brasilinensis. Planctomyces comes from the Greek word “Planktos”, which means floating and “mukes” means fungus; therefore, meaning a floating fungus (Scheuner et al, 2014). Brasiliensis is a Latin word that describes where the bacteria belongs to and where it was first isolated; in this case it was discovered Brazil (Scheuner et al, 2014). P. brasiliensis was isolated in the year 1982 at Lagoa Vermehla located on the Atlantic coast north of Rio de Janeiro.

P. brasiliensis has a diameter of a 0.7 – 1.8 µm, and has a characteristic shape of a spherical to egg-shape (Krieg et al, 2011). Its cell wall lacks peptidoglycan but it does have a proteinaceous layer, which makes it more likely to be a gram-negative bacteria (Jeske et al, 2014). The colonies of P. brasiliensis are dry and rough, and its maximum growth temperature can vary from yellow to ochre. The optimum growth temperature is between 27 to 35 °C (Scheuner et al, 2014). It has cellular appendages such as fibrils that are all randomly distributed around the cell. A monotrichous flagellum of about 20 nm can be observed in P. brasiliensis (Scheuner et al, 2014), although no motility has been reported yet (Krieg et al, 2011). 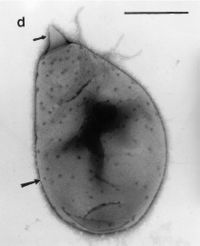 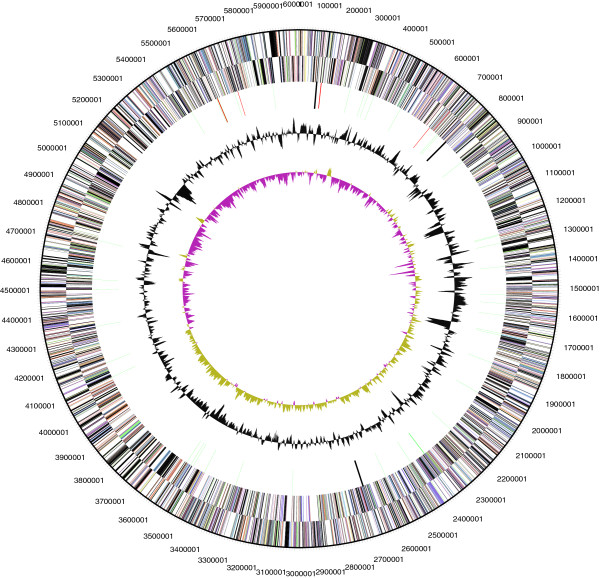 P. brasiliensis was first isolated in a salt pit at the Atlantic coast of Rio de Janeiro; it requires NaCl for growth and may be considered a halophilic species, because it has a tolerance to salt (0.1 - 1.7 mol salt Na+/l).

These bacteria obtain their carbon molecules from organic compounds. They oxidize the chemical bonds in organic compounds as their energy source. P. Brasiliensis is considered a chemoorganotroph for this particular growth characteristic. The bacteria can growth under several types of sugar sources such as D-cellobiose, D(+)-glucose, D(+)-galactose, maltose, D(+)-mannose, melibiose, rhamnose, ribose, trehalose, N-acetyl glucosamine, and glucuronate. Carbon sources such as D(−)-fructose, D-fucose, D(−)-lyxose, α-D-melezitose, raffinose, L(−)-sorbose, D(+)-xylose, methanol, ethanol, glycerol, D(−)-mannitol, D(−)-sorbitol, acetate, fumarate, lactate, malate, while pyruvate and succinate cannot be used as energy source (Schelesner, 1982). They are facultative aerobic chemoorganotrophic bacteria and some strains are able to reduce nitrate to nitrite under anaerobic conditions (Scheuner et al).

P. brasiliensis has an optimal growth temperature of 27 - 35°C. However, in a laboratory study it was grown in DSMZ medium 607 (M13 Verrucomicrobium medium) at 30°C (Scheuner et al).

P. brasiliensis grows by fermentation or, as mentioned before, the respiration of sugars. P. brasiliensis can degrade chitin and has the ability of to oxidize Ammonia in anaerobic conditions, where NH4 + NO2 -> N2 + 2H2O is the anammox process; it consists in partil nitrification of half of the aammonium to nitrate by ammonia oxidizing bacteria. Then, the enzyme hydroxylamine oxidoreductase catalyzes the oxidation of hydrazine and hydroxylamine.

P. brasiliensis can be found in fresh and salt water. This bacterium was first isolated from a hypersaline lake in the Atlantic coast of Rio de Janeiro (Schlesner, 1989)

There are many bioactive compounds which are leading drugs in medicinal therapeutics that can be found in marine environments such as sponges and macroalgae. The Planctomycetes family can be found in many macroalgae biofilms. This family has the ability to produce antimicrobial compounds and it has brought the attention for further studies to discover new drugs. The antimicrobial activity of the planctomycetes family was studied, where they were tested against E. Coli, Pseudomonas aeruginosa, Staphylococcus aureus, Bacillus subtilis, and Candida albicans. The results showed that planctomycetes that can serve as a source of bioactive molecules showed antifungal and antibacterial activity. For this study, 40 different planctomycetes were studied, including P. brasiliensis. These bacteria were isolated from macroalgae in beaches of north Portugal. The bacteria were cultured in M600 and M14 agar medium at 25°C (Graça et al, 2016).

To test the potential of producing bioactive compounds, the amplification and sequencing of PKS-l and NRPS genes were performed. Also, screening assays were performed to test the productions of antimicrobial molecules. In this case, P. brasiliensis demonstrated antimicrobial activity and genomic potential for the production of myxalamid, which is a new antibiotic from Myxococcus xanthus (Graça et al, 2016).

The results provided reported consistent evidence of high percentage of Planctomycetes, including P. brasiliensis, with a great antifungal and antimicrobial activity against Bacillus subtilis and C. albicans. Some planctomycetes produced anticancer agents due to the presence of epothilone and bleomycin pathways (Graça et al, 2016).

Another current research involving P. brasiliensis consists of a reclassification of P. brasiliensis, P. maris, and P. limnophilus. A reassessment of the taxonomy of the group was based on phylogenomic. The genome sequence of P. brasiliensis was reviewed. Based on the analysis of the physiological and genomic features, it was concluded that there is a disagreement with the confinement of the genera Planctomyces and Schlesneria. The revision of the 16S rRNA supported the fact that the current classification must be emended. The revision of the phylogenetic aspects led to the conclusion that there must be a formation of three new genera, which are Gimesia, Planctopirus, and Rubinisphaera to accomodate P. maris, P. limnophilus, and P. brasiliensis (Scheuner et al, 2014).

Authored by Fidel Gallegos, a student of CJ Funk at John Brown University