Changes to soil properties that are caused by plants, which in turn influence the performance of plants are termed as ‘plant–soil feedbacks’ [1]. Through changes in the demography of the plant population and/or the physiological activity of the individual plants, the plant’s effect on the soil condition increases (positive feedback) or decreases (negative feedback) [2]. Microbial activity and community composition is considered as one of the major drive factor of plant-soil feedback effects [3,4].

The basic approach of plant–soil feedback experiment is that plant first influence the composition of the soil community, which is the soil conditioning phase. Then, the effects of conditioning are evaluated by assessing soil effects on subsequent plant growth (Figure 1) [5,6]. In the early years, most of the experiments started the plant soil feedback experiment from field-sampled soil [7]. This approach strengthens the influence of plant on soil under natural conditions. However, the weakness of this approach is that soils in natural condition can be affect by a lot of factors and the composition of the soil community and abiotic properties may be changed [6].

A following developed approach was that plant species were grown in living soils to develop a soil community, which is the conditioning phase. Then the growth response on changed biotic conditions was tested which is the test phase. The advantage of this two-phase approach is that the effects from possible side effects of natural conditions are avoided and the abiotic conditions are controlled. However, the disadvantage of this approach is that there will be difference between the soil condition in greenhouse and that in the field [6]. This weakness may make it difficult to explain what was happened in the natural conditions.

Humans have been aware of and managed plant–soil feedbacks in agriculture and horticulture for more than 1000 years. In agricultural settings, plant–soil feedbacks often involves in soil nutrient depletion or the build-up soil-borne pathogens [1]. For example, the productivity of some crops declined and the rhizosphere community changed in the monocropping system [8]. Rotational cropping systems and intercropping system would help to reduce monocropping obstacles and to increase productivity [1,8]. Interest in plant–soil feed-backs has increased markedly in the past 20 years (Figure 2). Many exciting results are released. Plant–soil feedbacks is becoming an important concept for explaining vegetation dynamics, the invasiveness of introduced exotic species in new habitats and how terrestrial ecosystems respond to global land use and climate change [1].

Factors that influence the results of plant-soil feedback 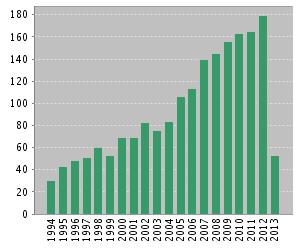 Factors that influence the results of plant-soil feedback have been thoroughly reviewed by Ehrenfeld [2].

Water: plant roots’ ability of taking up water alters the distribution and amount of water in the soil, which affects the physical traits of soil as well as the growth and reproduction of plants their selves [2]. Soil aggregation: Roots affect aggregation through plant carbon (C)-based microbial growth, the production of plant and microbial mucilages, see Rhizosphere: environment and mycorrhizal fungi, the presence of phenolic compounds in root exudates, and the overall input of SOM. Feedback between plants and the physical properties of soils arise from the promotion of aggregates by roots and root-associated microorganisms [2]. Soil temperature affects root growth, water availability, and microbial activity, thus affecting both nutrient cycling and soil respiration [2].

pH: The generation of carbonic acid from plant roots and imbalance uptake of positive and negative ions are important acid sources of soil. pH involved in plant-soil feedback because plant-induced acidification may promote conditions which only acidophiles can live [2]. Oxygen: some plants release oxygen from their roots and change redox conditions in soil which are presumed to be part of the feedback cycle [2]. Carbon and nitrogen cycle: different decomposition and mineralization rates, N cycling and C cycling are considered to be important factors that influence the results of plant soil feedback experiments [2].

Some soil community components have been studied to understand their contribution to the plant-feedback effects.

Arbuscular mycorrhizal fungi (AMF) [1] are known for their diverse beneficial effects on plants, especially for nutrient uptake, plant defense and plant resistance to abiotic stresses [9]. Usually the plant initiates a positive feedback that results in better nutrition, thus increasing fitness for both the plant and the microorganism [2]. For example, AMF result in a positive effect of plant growth for both invasive and rare plant species and AMF from home soils which isolated from the same plant species have a more positive effect on plant growth than the different plant species [4]. However, different plant species are proved to have different growth responses to different AMF species and their interactions can be ranging from mutualism to antagonism [10]. Thus, AMF may also generating negative plant growth responses. For example, Glomus etunicatum and Glomus microcarpum were found to have negative effect on the growth of their specific plant partners [11].

Soil pathogens, especially the fungal diseases, were proved to be the major driving factor of plant-soil feedback. Rare plants showed a significantly negative growth response to soil which was conditioned by the same plant species. In contrast, invasive species showed no growth depression [4]. This result can explain the success of invasive species occupying a new area. What’ more, different accumulation rates of a pathogenic oomyceteOomycota, Pythium oligandrum, accounted for the negative feedbacks on plant growth through changes in the soil community [12].

Root herbivores (insects, micro-arthropods [2] and nematodes [3]): the development of negative plant-soil feedback could be generated by root herbivores [13]. For example, the colonization of endoparasitic nematode species Heterodera arenaria [4] was proved contributing to the negative plant soil feedback in the root zone of the clonal dune grass, Ammophila arenaria [14].

Although the hypothesis that plant species can affect the decomposition and nutrient mineralization processes of microbes in soil, and that these effects can in turn affect plant soil feedbacks, studies that tested these processes are scarce [1]. More studies fousing on this field are needed. 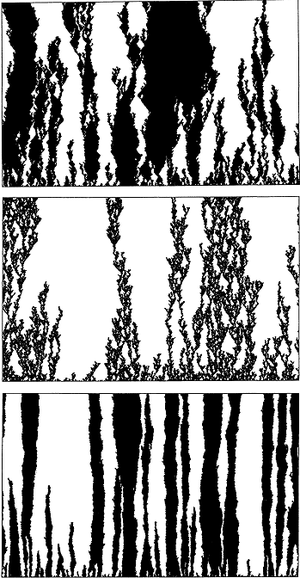 Three sample runs of spatially explicit stochastic simulations of the feedback between two plant species and their local soil communities. In all figures, the plants occupy a linear array of 638 cells (with wrap around ends) represented by the horizontal axis. The vertical axis represents successive generations; the initial array is presented as the bottom row and the arrays in sequential generations are stacked immediately above them. The two plant types are represented by dark and light shades, respectively. (a) Negative feedback with local dispersal. (b) Negative feedback with the 'black' species locally dispersed, but the 'white' species globally dispersed. (c) Positive feedback, with both species dispersed locally (17).

The success of many invasive species can be explained by plant-soil feedback. One of the main reasons why exotic species can become so invasive in a new area is that they are released from species specific enemies that control abundance in the native range [1]. In a study in an old field, invasive plant species had neutral to positive plant soil feedbacks comparing to dominant native plant species which had negative feedbacks [4].

Plant-soil feedback can be used to explain the relative abundance and rarity of plant species [1]. Recent work has shown that the performance of conspecific tree seedlings are inferior when explode to the enemies of the same adult trees [16]. Tree species that have stronger negative feedback effects are less common as adults in the forest community [16].

Climate change is likely to impact the soil organisms directly because the warming of the soil, which result in the increase of microbial activity, the breakdown of organic matter and thereby the loss of carbon from soil [1]. Changes in temperature, water availability and rising atmospheric carbon dioxide (CO2) concentration, all impact plant photosynthesis and the transfer of photosynthetic carbon to soil, with cascading effects on soil organisms and ecosystem functioning [1].

[8] Bopaiah, B. M., and shetty, H. s. (1991). Soil microflora and biological activities in the rhizospheres and root regions of coconut-based multistoreyed cropping and coconut monocropping systems. Soil Biology and Biochemistry 23, 89-94.

Edited by <Meng LI>, a student of Angela Kent at the University of Illinois at Urbana-Champaign.