A Microbial Biorealm page on the genus Plasmodium malariae 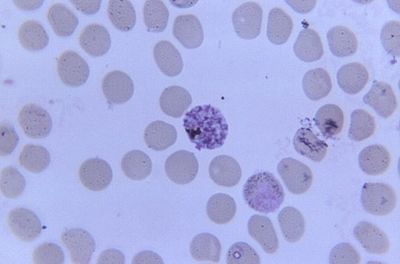 Plasmodium malariae is a malaria-causing parasite that colonizes the blood of a human host. Malaria is a disease that is both preventable and curable, but still continues to cause hundreds of thousands of deaths annually. A recent inquiry conducted by the World Health Organization (WHO) showed that in 2009, 781,000 deaths could be attributed to malaria, and a majority of the victims were African children. This is one of the reasons that studying the species of the genus Plasmodium is so important. Although Plasmodium malariae is one of the less virulent strains of the genus, it is still one of the few species that use a human as a host. It is the study of the group of organisms that infect humans that could lead to new drugs that may be more readily available, easier to produce, cheaper, or that can combat drug-resistant strains (WHO).

Not much is known about the genome of the species Plasmodium malariae specifically, because it is among the species for which the entire genome has not been sequenced yet. However, there are some important characteristics about its genome can be determined from the genome sequences of other species in the Plasmodium genus. It is estimated that the genome of an organism in the genus Plasmodium contains anywhere from 23 million to 27 million base pairs, in the form of 14 linear chromosomes. These 14 chromosomes code for about 5,500 genes, many of which function in invading the host immune system. Many of the Plasmodium genomes that have been sequenced show that the species of this genus have DNA that is A+T rich. This is especially true for the species P. falciparum that is almost 79.6% A+T. This high A+T content is often known to affect recombination frequencies in other species, but seems to have no effect on the virulence of any particular species. Research shows that 77% of the proteins coded for by the genome of Plasmodium are conserved across the different species of the genus (Winzeler). Some additional research shows that the mitochondrial genomes of Plasmodium are highly conserved throughout the genome as well (K Tanabe).

The parasite Plasmodium malariae, takes on several structures during its 78 hour life cycle. We shall begin observing it starting with the structure it has in the salivary glands of the anopheles mosquito before it infects its mammalian host. It starts its cycle at this point as a Sporozoite, with Sporo meaning seed and zoite coming from the greek word zoo which means animal. A sporozoite (which can also be known as a falciform body), is an elongated nucleated cell. Its ability to glide on solid substrates, thus invading host cells is based on the help it receives from the trans membrane protein TRAP ((thrombospondin-related anonymous protein). Another protein that assists the Sporozoite with its attachement to its hosts cells and the sporozoite development is a multifunctional protein named circumsporozoite protein (CSP). This protein has been observed on the immature oocysts capsule (found in the mosquito host), but rarely in its cytoplasm. (Coppi and Natarajan)

Once sporozoites enter the mammalian hosts body, they quickly travel to the liver. At the liver they differentiate into merozoites, which is the cell stage that binds via ligands to the host’s red blood cells. The P. malariae characteristically causes “spikes” in its host’s cell, with dimensions of a mean hight of 7·59 nm and a mean diameter: 52·95 nm. This is a different morphology than that that other Plasmodium infections cause Red Blood Cells to undertake, and can be used to differentiate amongst the different infections. (Matuschewski and Nunes), (Li. A)

Another characteristic of P. malariae is that it does not appear to enlarge its host’s cell. Infection is observed by the fact that upon entrance to the cell, the merozoites appear to quickly take over, up to one third of the cell. As the invasion progresses, the cell begins to become segmented, with the merozoites filling up the cell, and the cells pigment darkening. The merozoites symmetrically arrange themselves in the cell wall, with the nucleus and cytoplasm separating. At some point, the cell bursts, and the merozoites enter the blood stream. They then take on the developmental stage where they are called trophozoites. The next stage is a schizont, and following the burst of the schizont in the mammalian host, we have merozoites again. In the mosquito host, the developmental stages vary slightly, with the uptake of gametocytes, which later develop into ookinetes, and then oocysts, which then rupture to release sporozoites. The sporozoites can be then injected into a mammalian host.(Collins and Jeffrey).

Malaria is a disease that is commonly found throughout most tropical and subtropical areas in the world. There are four malarial parasites from the Plasmodium genus that infect humans and cause symptoms indicative of the disease (Hayakawa T).

Infections of P. malariae generally coincide with those of P. falciparum. The presence of P. malariae tends to go unnoticed unless PCR techniques are employed to reveal the infection. P. malariae is widely found in sub-saharan Africa, southeast Asia, and islands in the western Pacific. Cases have also been reported in the Amazon basin of South America, and in recent history, in Europe and southern parts of the United States (Collins and Jeffrey).

Plasmodium malariae is primarily found in one of the two host species it infects. It is transmitted by bites from the Anopheles mosquitos, and causes malaria symptoms when it infects humans. Not just limited to mosquitoes and humans, scientists at Osaka University in Japan have discovered strains of P. malariae in imported chimpanzees from Africa. Despite being infected, the chimps have not shown symptoms of disease (Hayakawa T).

P. malariae is one of the four species of the genus Plasmodium that uses humans as a primary host. The other three species are P. falciparum, P. vivax,and P. vivale. The primary mode of transmission from host to host by these four species uses a female Anopheles mosquito as a vector. (DPDx) While the symptoms resulting from the different species are different, the life cycle only has minor differences. The life cycle is initiated when the mosquito vector injects sporozites into the human hosts during a blood-meal. The sporozites then migrate to the liver, where they reproduce asexually and produce merozites. These merozites then enter the bloodstream and infect erythrocytes, becoming trophozoites. The period of time that the trophozoites are enlarging is called the trophic period, and this ends when several divisions occur, but none of these cycles go through the cytokinesis stage, forming what is called a schizont. The erythrocyte then lyses, introducing new merozites into the blood cycle and starting the cycle over again, until an uninfected Anopheles mosquito takes a blood-meal from the infected host, and transmits the infection to another host. (Wiser) 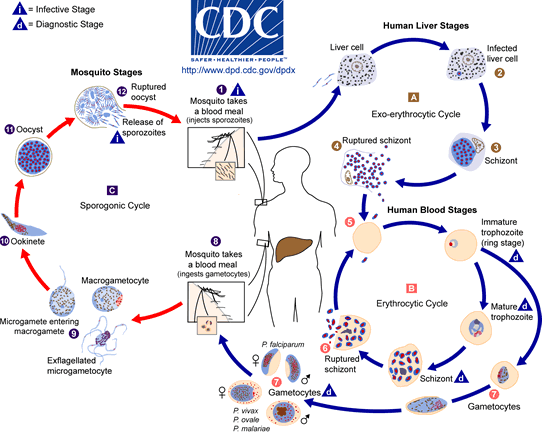 The main physical manifestations of malaria in a human host are febrile attacks that are known as malarial paroxysms. These symptoms appear during the blood stage of the life cycle; no symptoms will appear during other stages. The severity of the infection depends on the infecting species of Plasmodium and the health of the host prior to infection. (Wiser) 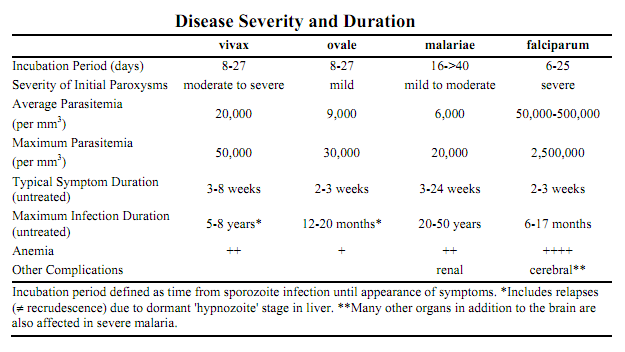 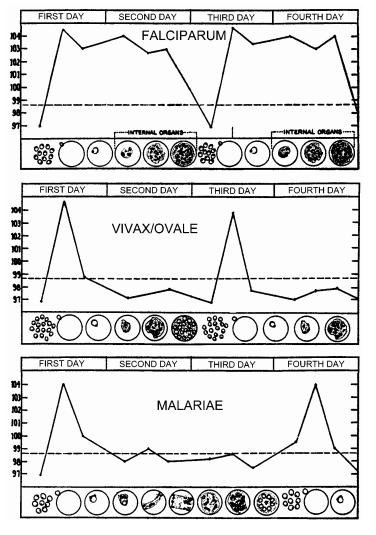 Researchers at the National Institute of Allergy and Infectious Diseases are using genetic studies of Plasmodium yoelii, isolated from wild African rodents to understand pathogenicity of malaria parasites. P. yoelii exhibits traits similar to human malaria viruses such as Plasmodium falciparum and Plasmodium malariae. The article is a methods video and article describing how to obtain a genetic cross of rodent malaria parasites. Published in January of 2011, http://www.jove.com/details.php?id=2365 .

Plasmodium malariae malaria has been rarely reported from Bangladesh. Early stages of Plasmodium malariae can be difficult to distinguish from other species by microscopy alone. Severe malaria is an extremely rare manifestation of a monoinfection with Plasmodium malariae. A 32 year old Bangladeshi male laborer from Fatickchari, Bangladesh, was admitted to Chittagong Medical College Hospital in July 2008 because of a ten day history of evening fevers, chills, rigors, headache, anorexia, myalgia, dry cough, palpitations, drowsiness and several generalized convulsions. He also complained of abdominal pain and nausea without vomiting or diarrhea for the next five days. Initially he was treated with paracetamol, which controlled his fever, at his local health complex. However, he became disorientated and suffered from generalized convulsions, and was referred to Chittagong Medical College Hospital for further management.

A thin blood film test showed Plasmodium malariae with a parasitaemia of 3 per 1000 red cells (14 017/uL), with typical band form trophozoites, schizonts containing 4-6 merozoites, and occasional gametocytes. This patient showed rosette formation, the binding of two or more infected red cells to an uninfected red cell. Rosettes were observed in a frequency of 50 per 100 trophozoite infected red cells. Although rosetting is usually described only in Plasmodium falciparum after in-vitro maturation of the parasites, it is highly uncertain if rosettes in Plasmodium malariae significantly constrict microvascular flow, since parasitaemia is low. Usual treatment of uncomplicated Plasmodium malariae infection is with chloroquine or an artemisinin-based combination therapy. However, because of the disease severity, this patient was treated with intravenous quinine.(Rahman)

In summary, a rare case of a PCR-confirmed monoinfection with Plasmodium malariae was present and rosetting occured in the peripheral blood film. The patient made a quick recovery with intravenous quinine.

Malaria most commonly presents as an acute systemic, febrile illness may manifest due to Plasmodium falciparum, P. vivax, or P. malariae. The major malaria parasites of humans cause acute illness that may be accompanied by P. malariae is the only one recognized to cause asymptomatic infections that can last decades.

In May 1997, one year after chloroquine treatment, the infected patient was revaluated. She felt clinically well and had gained 10 kg. No abnormalities were found on physical examination. The spleen was no longer palpable, and ultrasonography confirmed that the spleen was of normal size. Indirect immunofluorescence showed that antibodies against P. malariae had declined by a factor of 4, and serum IgG and hemoglobin levels had returned to normal. The presence of P. malariae was evaluated by determining the species-specific sequence of an 18S ribosomal RNA (rRNA) in blood samples from the patient. Sequence analysis of PCR-amplified DNA fragments from the patient's specimens confirmed the presence of an infection with P. malariae.(Vinetz)

-Plasmodium malariae in South America often coincides with infections of Plasmodium brasilianum, a parasite found in New World monkeys. It is apparently the same species as P. malariae, but has adapted to grow in monkeys following human colonization of South America in the last 500 years (Collins and Jeffrey).

-Plasmodium malariae has been shown to have anti-malarial resistance to mefloquine, atovaquone, and proguanil. In a study by Müller-Stöver et al. three patients, all of whom had been immunized previously by the aforementioned drugs 12-14 weeks prior to travelling to infected areas, were shown to have contracted P. malariae, leading researchers to conclude that perhaps these anti-malarials were not as effective against its pre-erythrocytic stages.

-Plasmodium malariae is the only human malaria parasite species that has a quartan cycle (three-day cycle). The other 3 species are tertan (two-day cycle). (Center for Disease Control)

Edited by students of Iris Keren