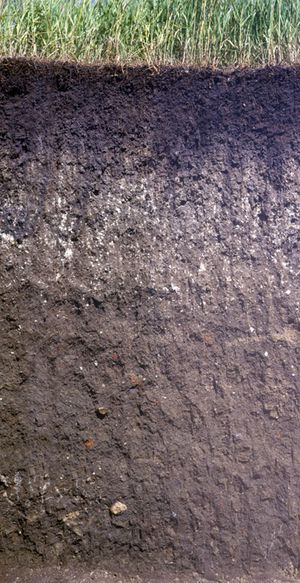 Mollisol Profile provided by the NRCS

Prairie soils make up approximately 6.9% of the worlds ice-free global land, and 21% of land in the United States (Buol et al.). These soils are classified by the USDA as Mollisols. Mollisols are dark fertile soils that are formed from the accumulation organic matter produced by dense root systems of prairie grasses (Brady and Weil). The majority of Mollisols are found in temperate climates with variable seasonal environments (Borchert). Fire is also an important in maintaining the grasslands that fuel the organic breakdown of the carbon rich areas (Buol et al.). These rich Prairie soils play the largest role for human use in conventional agriculture. This demand for agricultural production has left few Mollisols uncultivated around the world (Brady and Weil). Historically the combination of grasses and microbes in this environment has helped create a habitat that humans have preferred for cultivation for thousands of years. Microorganisms in prairie grass environments are responsible for the high amount of organic matter, and consequently the high productivity that is obtained in cultivation. Mollisols have high levels of carbon, nitrogen, and phosphorus. 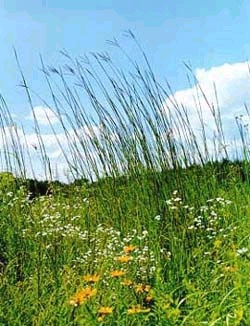 Prairie soils are covered by a variety of grasses ranging from short grass steppe species to tall grass species. Short grasses typically resemble monoculture meadows not normally exceeding 30cm in height. Tall grass prairies are less uniform and caintain grasses growing to heights of 1-3 meters. Vegetation cover is highly dependent on moisture regime in the area. Taller grasses require more moisture (Buol et al.). The root systems of these grasses are dense and are many time symbiotic with fungi. These fungi are high in nitrogen, and when this fungi is decomposed it enriches the soil.

Mollisols are rich due to the accelatraed decompostion of organic matter. These soils have a thick, dark, soft mollic epipedon. These soils are composed of wind blown silts or sands that are high in calcarious material. The vegetation type, specifically prairie grasses, help keep organic matter high, and is usually based on different moisture regimes in a given area (Brady and Weil).

Soil microbes are very productive under prairie soils. The extensive grass coverage, along with dense root systems and fungal mats allow an ample supply of organic matter to break down into various nutrients. The temperate location of this environment also produces a large amount of litter when grasses die in winter months.

Carbon is recycled back into the soil through decomposition. Microbes breakdown and utilized soluble components and proteins from organic material. Microbes break down different materials at different rates. For example Cellulose is more easily decomposed compared to Lignin. The two major end product in the carbon cycle after decomposition is carbon dioxide and microbial biomass (Sylvia et al.)This helps account for the high amounts of carbon and Soil Organic Matter in prairie soils. 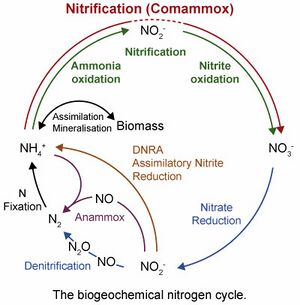 The Nitrogen cycle is also another key reason why prairie soils are very rich and productive. Microbes are responsible for both nitrogen mineralization and immobilization. Both processes regulate the amount of available nitrogen that is in the soil. Some bacteria are also able to fix nitrogen through Nitrogen Fixation, and use dinitrogen from the atmosphere as a nitrogen source.

Zymogenous organisms are very important in breaking down soluble organic matter in soils (Sylvia et al.). These organisms are R strategist species, most commonly bacilli, that are suited to environments with high organic matter that is easy to break down (Killham 1994). This breakdown is essential to create and sustain a prairie environment, and these organisms would less abundant in other soil types with less organic input.

These bacteria add nitrogen to the soil system by converting atmospheric Nitrogen to Ammonia.This process is restricted to prokaryotes. Some of these bacteria include cyanobacteria and actinomycetes, but close to 1000 varieties of bacteria fix nitrogen (Sylvia et al.).

Endopytes work directly with grasses, and in turn to help make prairie soils. These microorganisms form symbiotic relationships with the plant host. Endophytes are both fungi and bacteria. Endophytes typically inhabit the above ground portion of the plant, and are mot mycorrhizal fungi in the soil matrix. 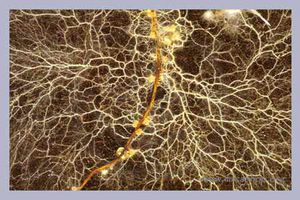 [1] side view of mycorrhizae functioning in the soil

Mycorrhizae literally translated means fungus root, and was first described by german scientist A.D. Frank in 1885. Mycorrhizae is simply a symbiotic relationship between plant roots and fungus. This relationship includes ectomycorrhizae, mainly basidiomycetes, and arbuscular mycorrhizae (Sylvia et al.). Mycorrhizae can have positive or negative effects on the host plant. Mycorrhizae also increase the amount of organic carbon in the soil systems, along with soil structure. In Prairie soils Mycorrhizae work extensively with grasses to establish dense mats that are critical in the maintenance of the soil.

Dr. Mulvaney et al. suggest that agricultural soils are being depleted of their soil organic matter because of increased, and sustained, application of fertilizers. Furthermore, The article argues continuous and increased nitrogen application is increasing microbial decomposition of organic matter at an alarming rate, and will be reflected on the global level. This problem may be fixed if soils were aloud a rest, and native grasses were allowed to inhabit an area again (Brady and Weil). In reality now managed prairie soils are in danger of a slow change to less productive soils.

"Distribution of Amino Sugars in Mollisols in the Northeast of China"

Research in Northeast China looked into pools of amino acids in different temperate regions, and what types of microbes are present and responsible for different pool sizes. The research concluded that in prime agricultural lands amino acids were derived from bacterial sources. This research helps when trying to understand why prairie soils are so productive. The main reason is the microbes in the soil, working with certain plants is certain environments. This study also underlies the great importance of bacteria in soil systems (sylvia et al.).

Wang et al. studied microbe function under different treatments on Mollisols in China. The study found that microbes were in largest abundance under soils that were restored to a natural prairie state compared to regularly cultivated soils. This study comparing restored sites to cultivated sites helps solidify the ideas that soil microbe environment is great under prairie grasses, and that this large microbial population helps make prairie soils so productive (Brady and Weil).

Edited by Morgan Davis, a student of Angela Kent at the University of Illinois at Urbana-Champaign.