Probiotics are defined as ‘live microorganisms, which when administered in adequate amounts, confer a health benefit on the host’ [1]. Probiotics were discovered by the Russian scientist and Nobel laureate, Élie Metchnikoff [2], who observed that certain microbes appeared to positively influence health by altering gut flora [3]. The most common types of microbes used as probiotics are lactic acid bacteria (LAB) and bifidobacteria. Probiotics can be consumed in fermented foods that contain added live cultures, such as fermented dairy products [4]. They are also ingested as dried bacterial supplement [4]. The established uses of probiotics include treatment of antibiotic-associated diarrhea (AAD), acute infectious diarrhea, and colic in infants [2]. Disputed uses, due primarily to inconclusive trial results and inadequate trial quality, are the treatment of inflammatory bowel disease (IBD), irritable bowl syndrome, and acute dermatitis [2].

There are currently three proposed mechanisms of action by which probiotics exert their effect in contributing to human health [2]. 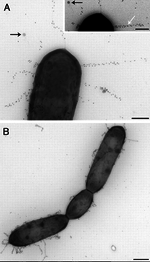 One proposed mechanism is that probiotics act to competitively exclude pathogenic bacteria from the intestinal epithelia [5]. In their study, Vesterlund et al. (2006) found that the pathogen Staphylococcus aureus, which binds to mucus in the intestine, can be displaced by specific strains of lactic acid bacteria (LAB). Additionally, they found that probiotics with higher affinity for the mucus could outcompete Staph. aureus for binding sites [5].
Another mechanism, elucidated by Kankainen et al. (2009) found that some strains of LAB possess pili, which confers the ability to effectively bind the intestine. These LAB persist, and are well positioned to inhibit pathogenic binding, either by direct or competitive inhibition for microbial adhesion sites [6].

According to Buret et al. (1999), enhancement of epithelial barrier function may be stimulated with probiotics. They found that probiotics are capable of stimulating epidermal growth factor receptor (EGFr) [7]. EGFr redistributes the actin filaments in the apical zone of epithelial cells, strengthening the tight junctions between adjacent cells, thereby increasing resistance to pathogenic attack [8].
In a recent study, Anderson et al. (2010) illustrated that the probiotic Lactobacillus plantarum MB452 plays an important role in intestinal barrier enhancement, by altering gene expression of tight junctions. They discovered that when Caco-2 cells cells were treated with L. plantarum MB452, the expression level of several tight-junction genes was altered [9]. Due to their apical location, tight junctions are key in regulating epithelial permeability [9]. The importance of tight junctions enhancement becomes clear when considering Inflammatory Bowel Disease, characterized by ‘leaky’ barrier function enabling the cross of pathogens into the body [10]. Understanding how L. plantarum MB452 works to enhance tight junction structure could allow for future reinforcement of the intestinal barrier in healthy individuals, reducing their susceptibility to infection [9]. 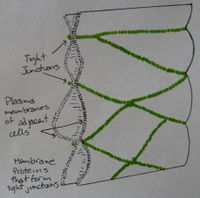 Modulation of the Immune System

Upon infection, a host’s immune system will induce inflammation via the up-regulation of proinflammatory molecules, such as the chemokine IL-8 [11]. While useful for clearing pathogens, prolonged infection can result in damage to the host, in the form of chronic inflammation [11]. Evidence suggests that probiotics can modulate the immune system through regulation of gene expression in the proinflammatory pathway [12]. Work done by Candela et al. (2008) suggests that consumption of probiotics such as L. acidophilus Bar13 and B. longum Bar33 act to inhibit IL-8 production induced by lipopolysaccharides (LPS) and tumor necrosis factor alpha (TNF-α), thus impeding the pro-inflammatory pathway.
Studies conducted by Schlee et al. (2008) found that the human beta defensin-2 (hBD-2) gene is up-regulated by the DNA of probiotics. It appears that probiotic DNA activates the nuclear transcription factor, NF-κB pathway [12]. NF-κB activation plays a key role in both innate and adaptive immune responses, by initiating transcription of genes encoding inflammatory cytokines [13]. The probiotics used induce a weaker pro-inflammatory response that activates intestinal barrier mechanisms without causing inflammation [12].

Antibiotic-associated diarrhea (AAD) is an otherwise unexplained source of diarrhea that occurs during antibiotic administration [14]. Antibiotics may induce diarrhea due to their direct effects on the intestinal mucosa and their reduction of fecal flora [15]. Reduction of fecal flora has critical consequences, as the anaerobic bacterial communities removed during this process are responsible for carbohydrate metabolism [15]. Their absence reduces fecal biomass, resulting in osmotic diarrhea [14].
AAD treatment focuses on reducing symptoms. While discontinuing the antibiotic is an effective method to eliminate symptoms, it is not desirable, as it results in inadequate eradication of the infection (15). Probiotics are often used in such cases to bolster the gut microbiome, which is diminished after antibiotic exposure. By reintroducing important commensal bacteria into the gut, probiotics help the intestinal microbiome reestablish itself [15].
A possible mechanism outlined for probiotics use in AAD demonstrates their ability to produce bacteriocins, toxins that can inhibit the growth of related bacterial strains [16]. Corr et al. (2007) demonstrated that the probiotic Lactobacillus salivarius UCC118, produced a bacteriocin capable of protecting mice against infection by the foodborne pathogen Listeria monocytogenes. This opens up the possibility for treatment of certain bacterial infections with probiotics as an alternative to antibiotics.

Due to the complexity of the intestinal microbiota, in vivo research using randomized controlled trials are challenging and often inconclusive. As probiotics are not approved by the American Food and Drug Administration, there is little data surrounding possible side effects and general safety of the products [15]. Current scientific evidence is based primarily on limited in vivo studies and hypotheses from in vitro studies [17]. While further trials are needed before probiotics are ready to be applied on a widespread basis, it appears that there are promising applications for certain medical cases, such as AAD [17]. Using probiotics to counter unnecessary antibiotic use is a worthwhile investment that may prove fruitful in years to come. Though it is necessary to pinpoint exact mechanisms, as well as optimal combination of strains for therapy, probiotics are an important field to continue exploring.

1. Food and Agriculture Organization–WHO. Guidelines for the evaluation of probiotics in food. (WHO, London, Ontario, 2002).

7. Buret, Andre et al. The role of the epidermal growth factor receptor in microbial infections of the gastrointestinal tract. Microbes and Infection, 1999. 1139−1144.

16. Corr, Sinead C. et al. Bacteriocin production as a mechanism for the antiinfective activity of Lactobacillus salivarius UCC118. Proceedings of the National Academy of Sciences of the United States of America, 2007. 104(18): 7617–7621.