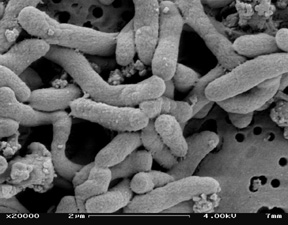 SEM picture of P. Atlantica by Chandra Carpenter at the University of Georgia.[1]. 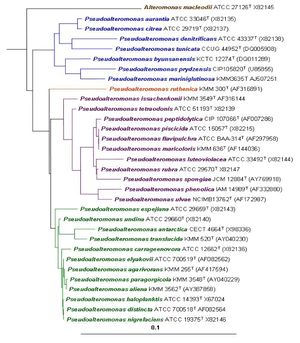 The genus Pseudoalteromonas can be split nicely between nonpigmented and pigmented species. Pigment is an organic compound that gives a characteristic color to living tissues and is involved in vital processes. The pigmented species of Pseudoalteromonas have been found to be responsible for natural product formation and have greater sequence divergence while the nonpigmented species have a phylogenetic shallowness and form a relatively distinct clade. Pigmented species have been shown to produce an array of low and high molecular weight compounds with antimicrobial, antifouling, algicidal and antibiotic activities. These compounds formed include toxic proteins, polyanionics exopolymers, substituted phenolic and pyrolle-containing alkaloids, cyclic peptides and a range of bromine-substituted compounds. Pigmented species have also been shown to influence biofilm formation, which promotes the settlement, germination and metamorphosis of various invertebrate and algal species and can serve as a defense agent for marine flora and fauna.[1]

Pseudoalteromonas produce a broad range of anti-bacterial products which have been found to aid them in the colonization of surfaces including their hosts and to assist the bacterial cells in their competition for nutrients and space as well as in their protection against predators grazing at surfaces.[3] Most of thePseudoalteromonas strains that form antibiotic substances are pigmented, but there are some exceptions. 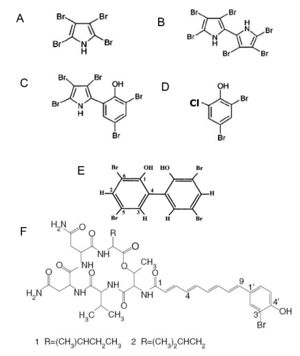 P. denitrificans produces a red pigment which has been identified as a cyclodigiosin hydrochloride. This substance has been shown to suppress T-cell proliferation and had been proposed to be used as an immunosuppressant therapeutic agent.[2] Strains of P. luteoviolacea have been found to produce two classes of antibiotic compounds: polyanionic macromolecules, which are associated with proteins and partly diffusible in culture media, and low-molecular-weight brominated compounds, including pentabromopseudilin, which are cell bound and not diffusible into media. The polyvalent ions have been found to have a bateriostatic effect by inhibiting bacterial respiration, while the brominated compounds have been found to have a strong batericidal effect, but the mechanism is still unknown. [3] One specific strain of P. luteoviolacea produces a purple pigment classified as violacein. This pigment has shown a strong anti-bacterial activity against several pathogenic bacteria, as well as against bacteria that can induce larval settlement of the tubeworm. In addition, violacein shows strong bactericidal, tumoricide, antiviral, antioxidant and anti-protozoan activities.[6] It is thought that the purpose of violacein is to protect the host of P. luteoviolacea from harmful microorganisms that may otherwise colonize it. The bacterium P. citrea have been found to produce two proteinaceous compounds. These compounds induce an increased rate of oxygen consumption in susceptible bacterial species causing them to accumulate oxygen free radicals, which lead to lethal cell damage. P. haloplanktis produces an unusually bioactive iron siderophore, bisucaberin, which had the ability to block DNA synthesis in tumor cells as well as induce microphage mediated cytolysis. Siderophore production in Pseudoalteromonas species gives them the advantage in an iron poor marine environment. [2] P. phenolica form brown-pigmented colonies that produce phenolic anti-methicillin-resistant Staphylococcus aureus (MRSA) substances. MRSA is a gram-positive pathogen that has become multi-drug-resistant. P. phenolica has the potential to have a significant impact in the medical industry because of its anti-MRSA activities.[4] The exact scope and ecological role of antibiotic production by Pseudoalteromonas is still under investigation. Many more novel natural products produced by Pseudoalteromonas need to be discovered, along with how they may be used for biocontrol or in pharmaceuticals.

The genus Pseudoalteromonas contains many marine species capable of synthesizing biologically active molecules.[3] The range of compounds produced by these marine species are not only used against eukaryotes, but in some cases are beneficial to eukaryotes. This is why many species of Pseudoalteromonas are found in association with eukaryotic organisms and display anti-bacterial, bacteriolytic, agarolytic and algicidal activities.[3]

Pseudoalteromonas species express a range of extracellular compounds, such as enzymes or toxins, which allow them to successfully compete with other organisms. Many Pseudoalteromonas strains have been described to have agarolytic activities because they produce the extracellular enzymes β-agarase and α-agarase. These agarases degrade the agar, found in the cell walls of some red algae, by cleaving its polysaccaride chains. This allows the bacteria to acquire nutrients from the red algae easily. Agarose decomposing strains include P. agarolyticus, P. sp C-1, P. carageenovora, P. atlantica and P. citrae. P. bacteriolytica is another strains of bacteria that expresses biological activity against marine plants. They are believed to be the causative agents of red spot disease in L. japonica, a brown alga.[3] Some bacteria such as P. sp. Strain Y and P. sp. A28 have been found to express proteases, which cause lysis of harmful micro algae blooms. The algicidal activities of these two strains of bacteria have given them a competitive advantage in nutrient acquisition and colonization.[3]


Many Pseudoalteromonas species have also been shown to produce extracellular toxins. Such toxins include tetrodotoxin, the causative agent of pufferfish poisoning and a toxin that has been suggested to cause fish mortality produced by P. piscicidia. P. Tunicata has been proven to be toxic to invertebrate larvae and algal spores.[3] 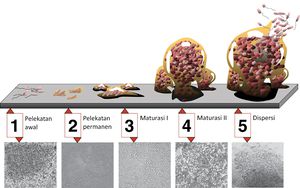 5 stages of biofilm development. Stage 1, initial attachment; stage 2, irreversible attachment; stage 3, maturation I; stage 4, maturation II; stage 5, dispersion. Each stage of development in the diagram is paired with a photomicrograph of a developing P. aeruginosa biofilm. All photomicrographs are shown to same scale. Retrieved from http://commons.wikimedia.org/wiki/File:Biofilm_id.JPG[7].

Pseudoalteromonas species can also produce extracellular compounds that promote the survival of other marine organisms. Exopolysaccharides (EPS) has been shown to enhance the survival of other organisms in marine habitats. Bacteria, such as P. sp. Strain S9 that produce EPS, allow a higher degree of larval settlement and their subsequent metamorphosis and development. The secretion of EPS can benefit the survival of both the host and other organisms in the near vicinity of the producer strain by providing a protective barrier against antibiotics, against predation of protozoa and by enhancing nutrient uptake. EPS provides survival strategies for cells much like a biofilm. 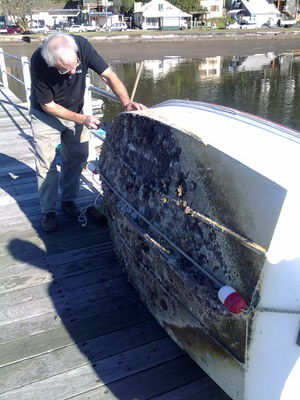 Biofouling organisms on the bottom of a boat. Retrieved from http://commons.wikimedia.org/wiki/File:Boat_fouling_organisms_(4875278100).jpg.[1].

Biofouling is the accumulation of microorganism, plants, algae or animal on the wetted surface of a host organism or substrate (e.g. the underside of dock, boats, submerged rock etc.). Biofouling is occurring constantly in marine environments. Bacteria are among the first organisms to foul wetted surfaces through the formation of biofilms. The biofilm made by these microorganisms, serves as a structural base for attachment and growth of other organisms such as other microorganisms, plants, algae, sessile plants, invertabrates and animals. When biofouling communities reach maturity, they become highly dynamic and complex ecosystems that are extremely difficult to eradicate.[1]

The Advantage of a Symbiotic Relationship with Anti-Fouling Microbes

Barnacles, mollusks, seaweed and tube worms are the common organisms associated with biofouling activities, but in fact, there is a huge diversity of biofouling organisms. Over 1700 species have been identified to be responsible for biofouling. Many organisms have developed anti-fouling strategies to combat biofouling activities of other organisms. The drawback of having an anti-fouling system is that it is energetically costly for the organism. It has been hypothesized that some eukaryotes do not use chemical or physical anti-fouling systems due to their energy cost, and rely instead on a microbial defense. They do this by allowing microbes, capable of producing anti-fouling compounds, to grow on their surfaces and form biofilms.[5]

Deeply pigmented strains of Pseudoalteromonas have been found to be effective in inhibiting the settlement of various biofouling invertebrates and algae. P. tunicata is a bacterium that exists on green algae off the coast of Sweden and has been found to produce five different extracellular compounds that inhibit settlement of invertebrate larvae and algal spores, growth of bacteria and fungi, and surface colonization of diatoms.[3] These compounds have an anti-larval component which is a heat stable polar molecule, an antimicrobial component which is a large two subunit protein (AlpP) that inhibits the growth of Gram-negative and Gram-positive bacteria, an anti-spore component which is a peptide and an antifungal yellow pigment compound component. The small anti-diatom component and protist molecules have not been identified yet. P. tunicata are unique because of their diverse collection of anti-fouling and inhibitory compounds. [3] The production of anti-fouling molecules by P. tunicata is thought to be controlled by a nutrient related response, perhaps by the acquisition of trace iron. [1]

P. tunicata is able to effectively compete with other marine isolates during biofilm formation due to its ability to produce the potent antibacterial compound AlpP. In an experiment by Rao et. al., it was found that P. tunicata was dominant isolate in biofilms and was able to completely remove competing strains unless they were not sensitive to the protein molecule, AlpP, produced by P. tunicata or if they exhibited strong inhibitory activity toward P. tunicata. When and AlpP knockout mutant was used instead, P. tunicata was not able to compete with other strains. This suggests that AlpP provides P. tunicata with an advantage during colonization of biofilms formed by other marine bacteria.[5]


The anti-fouling ability of P. tunicata is important for their survival in the marine ecosystem and is likely required for their colonization of different substrate surfaces. Other bacterial strains such as P. luteoviolacea, P. aurantia, P. citrae and P. ulvae have also been found to produce antibiotic compounds essential in preventing the settlement of fouling species. All of these strains have the advantage of being resistant to natural antibiotics, but no one strain produces a collection of compounds that allows them to become dominant over all the other organisms in their given econiche. To overcome this barrier, multiple strains of antibiotic producing bacteria form complex biofilm communities. Because the biofilm contains a diverse array of species producing a variety of antibiotics, it prevents itself from being overgrown by any one species and also reduces invasion by other species. 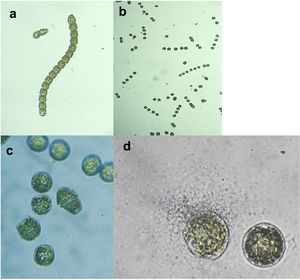 Biofilm forming Pseudoalteromonas species have not only been found to inhibit settlement and germination of anti-fouling species but they have been found to directly lyse cells of various algal species. An example is P. sp. Strain Y, which produces a unidentified brominated antibiotic, low in molecular weight, that can completely lyse algal cells within a matter of hours. [1]

Biocontrol is the antagonistic interactions between microorganisms and between bacteria and higher organisms. Many biofilms, which contain Pseudoalteromonas species within them, display biocontrol activities by producing toxic molecules that repel fouling organisms. Scientists have proposed that species of Pseudoalteromonas that display these activities could be used in anti-fouling technologies and to help control toxic algal blooms.3


Scientists have been investigating how P. tunicata could be used as a biocontrol treatment, because of its ability to successfully produce anti-fouling agents in its natural environment. Scientists have now developed a method of immobilizing P. tunicata cells into polyacrylamide gels and polyvinyl gels. The purpose of this method is to entrap live cells in a gel matrix surface coating, while also allowing for the outflux of anti-fouling components. The result is a ‘living paint’ that in theory could be used on the bottom of boats, docks, buoys, etc... to prevent damage that occurs to these objects by the settlement of fouling invertebrates and algae.3

Edited by (Jaclyn), a student of Nora Sullivan in BIOL187S (Microbial Life) in The Keck Science Department of the Claremont Colleges Spring 2013.