Purine alkaloids are produced by plants, examples of which include caffeine, cocaine and nicotine. Degradation of purine alkaloids occurs in plants, fungi and bacteria. In bacteria, it is the process by which caffeine (1,3,7-trimethylxanthine) and other purine alkaloids are catabolized by N-demethylases, producing xanthine and then further degraded by oxidases. An alternative pathway involves solely oxidative methods. Caffeine in particular can be quite toxic to some microbes; this has been shown in Escherichia coli DH5α (3). At the other end of the spectrum, there are some microbes such as Pseudomonas Putida that use caffeine for metabolism as their main carbon and nitrogen source. These organisms are often closely associated with plants and purine alkaloid synthesizing organisms. Microorganisms such as P. putida are therefore of interest for industrial processes like the decaffeination of beverages and coffee pulp pollution (5).

Alkaloids are secondary metabolites that have diverse structures (1), however, two commonalities underpin the chemical categorization: all alkaloids contain nitrogen and are classified as organic compounds. The purine alkaloids are a distinct form that have a nitrogen containing ring structure resembling that of purine. They are termed pseudoalkaloids, as they are not derived from amino acids like true alkaloids (2). The aromatic structure makes them recalcitrant to degradation.

An alternative pathway involves solely oxidative methods. It involves a different oxidase enzyme, caffeine oxidase, which functions in a completely separate process where caffeine is catabolized directly to 1,3,7-trimethyluric acid instead of passing through a pathway of intermediates (4). This course of degradation does not involve N-demethylases and is therefore entirely oxidative. These mechanisms of catabolizing the purine alkaloid caffeine are present in plants, fungi and bacterial microorganisms.

The process of purine alkaloid degradation has been found in multiple bacteria including Pseudomonas, Serratia, and Rhodococcus. However the most well studied is P. putida. It is a rod-shaped, flagellated, gram negative bacterium that possesses a diverse range of aerobic metabolism. For example, it has been observed living in caffeine concentrations of 50g/L (7). The strain Pseudomonas putida CBB5 was isolated from soil and found to catabolize caffeine by the mechanism described above using N-demethylases. The genes encoding enzymes required for caffeine degradation are related to a specific transmissible plasmid found in caffeine-resistant strains of Pseudomonas. This plasmid may also be responsible for chemotaxis towards caffeine and related molecules (6). P. putida can also use the intermediates of caffeine degradation, theophylline and monomethylxanthine, for metabolism (10). This form of metabolism uses N-demethylation similar to that in caffeine metabolism with convergence of mechanisms at the xanthine stage. Because of its unique abilities to break down aromatic hydrocarbons and its nonpathogenic nature, this bacterium has high potential for bioremediation. 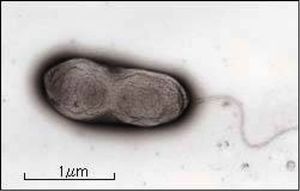 One of the characteristics of alkaloids is that they act on the central nervous system of humans and other mammals (2). Activity of alkaloids can affect major chemical transmitters such as epinephrine. This is certainly true of caffeine, however, this can cause antagonist effects such as cardiovascular problems and pregnancy complications (4). Because of this, it is beneficial to decaffeinate products. Conventional techniques of decaffeination can be expensive, toxic and cause products to be less tasteful (6). Therefore, the use of microbial decaffeination methods can be advantageous to avoid these problems. Another usage for biological decaffeination by microbes is the removal of caffeine from coffee and tea pulps. These are generated during the production of coffee and tea and discharged into water sources where they can be used as nutritional resources, but only if they are void of caffeine. In this sense, decaffeination techniques are an environmental advantage (5).

Defining the enzymology behind purine alkaloid degradation in microbes is essential in being able to implement biodecaffeination processes. Previously, metabolism of caffeine was credited to one broadly specific N-demethylase, but recent studies have shown that it is actually accomplished by two independent enzymes. These enzymes are actually suggested to be monooxygenases with N-1 and N-3 demethylase activity. The genes for these NdmA and NdmB enzymes have been pinpointed to a specific genomic DNA fragment, which also contains genes for NdmD (the enzyme responsible for electron transfer from NADH) and NdmC (an N-7 demethylase) (8). The knowledge of these enzymes could have vast bioremediation applications, as well as provide a leeway to the discovery of new N-demethylases.

(7) Mazzafera, P., “Degradation of caffeine by microorganisms and potential use of decaffeinated coffee husk and pulp in animal feeding.” Scientia Agricola, 2002.