Table 1. Known virulence factors of Staphylococcus aureus and their response to the agr, sarA, sarS, and sae global regulators. This table was created by Arvidson and Tegmark (2001).[1]

Staphylococcus aureus is a gram-positive bacteria that is naturally found in the nasal cavity of many individuals as a commensal member of the nose microbiome. On certain occasions, most notably in clinical settings in which patients may have weakened immune systems or have recently experienced medical procedures, S. aureus may abnormally enter other parts of the body and cause dangerous infections [2]. S. aureus is the most common cause of Staphylococcal infections and the primary treatment to combat S. aureus infection is the use of antibiotics such as methicillin [3]. A growing concern regarding the treatment of infection by S. aureus and other bacteria is the increasing presence of antibiotic resistant strains of bacteria in medical settings, an issue that can be partially and temporarily addressed through the development of novel antibiotics [4]. In order to develop effective antibiotics and better control bacterial infections, we must understand the mechanisms that control and contribute to the virulence of bacteria such as S. aureus. One such method of virulence control is the use of regulatory RNA molecules to control the expression and activity of virulence factors in bacteria.

Staphylococcus aureus infections are characterized by a number of virulence factor proteins that contribute to its pathogenic success. Adherence factors, or adhesins, facilitate the attachment of S. aureus to the host extracellular matrix. Adherence factors related to S. aureus infections are known as microbial surface components recognizing adhesive matrix molecules and are thus a part of the MSCRAMM family of protein adhesins [5]. A much broader group of proteins known as exoproteins are also produced by S. aureus to be secreted during infection; such proteins include exotoxins and enzymes that tend to assist in the infection cycle while harming the host organism. Cytolytic proteins released by S. aureus lead to pore formation in host cells, causing cell leakage and eventually cell lysis [6]. Another notable group of exotoxins produced by S. aureus is the superantigens: antigenic molecules that bypass the typical immune system antigen recognition process, leading to increased T cell proliferation and cytokine release that leads to an immune system overresponse and thus toxic shock [7]. S. aureus also produces a number of exoproteins, such as the FLIPr and CHIPS proteins, that inhibit the immune system’s ability to respond to the S. aureus infection [8].

Expression of these virulence factors is mediated by a complicated network of global regulatory elements that allow S. aureus to precisely control its protein production throughout the infection timeline (Table 1). The two primary protein groups responsible for virulence factor regulation in S. aureus are the two-component regulatory systems and the SarA protein family [9]. An example of a two-component regulatory system, along with a demonstration of the complexity of the topic and our lack of familiarity with it, is the saeRS regulatory system. The transcription pattern of sae is quite complicated and changes within the growth cycle of a cell. Additionally, sae is expressed from several promoters, giving rise to four or five unique transcripts- some of which have two reading frames. It is also suggested that sae interacts with the agr quorum sensing system within the exoprotein activation pathways as a means of coordinating this process with environmental signals, although little is known about the details of this possible association [10]. Members of the SarA protein family also play an important role. For example, S. aureus proteins SarA and one of its homologues, SarS, act mainly as a downregulator and activator of genes important to the infection cycle [11].

Role of the Accessory Gene Regulator Locus in Virulence

Figure 1. Schematic representation of the Staphylococcus aureus agrBDCA and hld locus. The gene encoding the peptide-pheromone precursor is solid black, the sensor proteins are marked with horizontal hatching, and the response regulators are marked with vertical hatching. The amino acid sequence of the peptide-pheromone precursor is shown below the diagram. This figure was created by Kleerebezem et al. (1997)[12]

The accessory gene regulator (agr) locus is vital to the infection cycle of Staphylococcus aureus, acting as a regulator for the production of virulence factors and other molecules related to virulence [13]. Agr is known to consist of two transcriptional units (Figure 1). The first unit is transcribed from the promoter P2 and codes for a two component regulatory system and an autoinducing peptide molecule. The second unit is transcribed from the promoter P2 and encodes RNA III, a regulatory RNA molecule that also encodes the delta-toxin secreted by S. aureus [1]. Additionally, the agr locus allows S. aureus to regulate its virulence factors through a quorum sensing system [12]. In total, the agr locus has been shown to upregulate transcription of 104 genes and downregulate 34 genes in a cell density and agr-dependent manner. 20 of the 104 upregulated genes and two of the downregulated genes are related to virulence in S. aureus, with one additional downregulated gene that is a potential virulence factor [14]. The agr regulatory network includes a vast number of components, not all of which are listed here, and not every detail is known about the mechanisms by which it works.

Of the documented regulatory RNA molecules used by Staphylococcus aureus to control the production of virulence factors, RNA III is the most thoroughly studied. RNA III is found within the agr locus of the S. aureus genome where it encodes mRNA used to create delta-hemolysin, one of the toxins released during the S. aureus infection cycle[15]. In addition to its protein-encoding role, RNA III acts as a stimulatory molecule for the transcription of genes that encode secreted toxins and enzymes. The 5’ end of the RNA III molecule shows significant complementarity with an untranslated region of hla, the mRNA molecule that codes for alpha-toxin in S. aureus. This allows RNA III to bind the hla molecule, preventing the formation of a stem-loop structure and exposing the ribosome binding site [16].

Figure 2. Schematic view of RNA III's regulatory interactions with sa1000/spa and rot mRNA molecules. These mechanisms were determined and visualized by Boisset et al. (2007)[17] through their research on the topic of RNA III regulatory function.

RNA III has also shown involvement in virulence factor production as a translation repressor of mRNA molecules such as spa and those coding for products such as an adhesin and a secretory antigen precursor. RNA III performs this duty by binding the target mRNA sequences using its antisense 3’ domain to directly block translation; this process also induces rapid degradation of these target mRNA molecules (Figure 2). Although not yet confirmed, it has been predicted that RNA III similarly targets a number of other mRNA molecules coding for other proteins related to virulence. The initial mRNA-RNA III interaction is thought to be facilitated by a 5’ hairpin loop structure present within the target mRNA sequences that contains the molecule’s Shine–Dalgarno sequence. The bonding of RNA III to the mRNA molecule yields an extended RNA duplex, likely marking the molecule as a target for RNase III. Along with directly influencing the production of virulence factors in S. aureus, RNA III has been shown to bind the mRNA transcript for the Rot protein [17] (Figure 2), an important member of the S. aureus virulence regulatory network and a member of the Sar family of regulatory proteins [18].

The antisense molecule RNA I has also been shown to exhibit regulatory effects relating to virulence in staphylococcal bacteria such as as S. aureus, although this molecule seems to regulate the replication of a multi-resistance plasmid as opposed to directly controlling the production of virulence factors [19]. 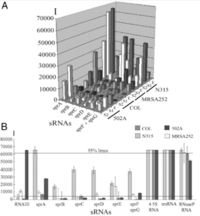 Figure 3. Expression profiles of sRNAs in Staphylococcus aureus among four different strains (502A, COL, MRSA252 and N315). (A) sRNA expression was measure during the exponential, early stationary, and late stationary growth phases of S. aureus (E, S1 and S2 respectively). (B) Expression profiles of 11 sRNAs within each strain at growth phase S1. Expression levels beneath the lower of the two horizontal lines were considered insignificant. This figure was created by Pichon and Felden (2005)[20] using data from their research.

SprA through SprG are sRNA molecules produced by Staphylococcus aureus (Figure 3), all of which are encoded on pathogenicity islands within the S. aureus genome. The variation present within a number of these products along with their presence on pathogenicity islands suggests that these molecules may be involved in virulence regulation, although this is only confirmed for a few of them such as SprA which is suspected to have a role in regulating expression of an ABC transporter [20]. The SprC sRNA was found to inhibit virulence and host uptake within a mouse model organism, suggesting that it plays a role in limiting the destructive capabilities of S. aureus. SprC demonstrates a modest yet noticeable negative regulatory effect on the major staphylococcal autolysin (ATL) that facilitates host uptake of S. aureus. This regulatory effect occurs due to SprC’s binding to the atl mRNA, an event that inhibits ribosome binding to atl [21]. SprD contributes to the virulence of S. aureus as a negative regulator of the immune-evasion IgG binding protein (Sbi). SprD seems to fulfill this duty by binding to and inhibiting expression of the sbi mRNA sequence, enhancing the virulence of S. aureus [22].

Given the importance of Staphylococcus aureus as a large and ever growing concern within medical settings around the world, finding ways to combat this bacteria’s viral tendencies will greatly improve the safety and effectiveness of our healthcare systems. Understanding the mechanisms that control for virulence in S. aureus will greatly aid in this endeavor, providing us with possible treatment targets to limit the spread and intensity of infections. RNA I, RNA III, SprA, SprC, and SprD have all shown involvement in regulatory processes of virulence is S. aureus. It is important to keep in mind, however, that our knowledge regarding this topic is constantly evolving with new research. While a relatively small number of regulatory RNA molecules have been identified as participants in virulence regulation, there are likely many more RNAs that hold related roles in S. aureus.