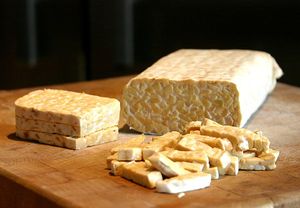 Rhizopus oligosporus is considered a domesticated strain of Rhizopus microspores and is not found in nature. Because of its domestication, it does not produce rhizonins and rhizoxins as secondary metabolites,, unlike other strains of R. microsporus [1]. Though domesticated, R. oligosporus maintains a highly specific morphology related to its large and irregular spores, giving it an exotic appearance.

The genome of R. oligosporus has not been sequenced completely; neither has it been studied beyond the specific isolation of a gene coding for chitinase I. Researchers examined antifungal activity of chitinase I through plasmid transformation from R. oligosporus inserted in tobacco plants [4]. The isolation of chitinase I, a hydrolytic enzyme which targets the chitin found in the cell walls of many fungal species, indicates that R. oligosporus may have some antimicrobial activity [4]. Other variants of the Rhizopus microspores species often produce toxic metabolites, but R. oligosporus strains do not possess any genes for these metabolic toxins [rhizonins and rhizoxins), having apparently lost the genes for toxic secondary metabolites present in R. microspores during domestication [1].

R. oligosporus forms large spores that are sub-globulose to globulose. Its spores have non-parallel ridges and valleys and the plateaus of the spores are often granular. R. oligosporus also has a high proportion of irregular spores and defects in spore formation [3].

As R. oligosporus is a widely used starter culture for tempeh production, many studies have been directed towards its growth in the context of industrial application. In particular, many early research centered on determining R. oligosporus’s optimal growth conditions, alongside those of other industrially-used microbes, and investigated factors such as pH, temperature, media type, etc., for [9] [7] [8] [6]. Researchers know little about R. oligosporus’ ecology beyond its optimal growth conditions in an industrial-/research-type environment.

The optimal growth conditions of R. oligosporus are at temperatures between 35-40⁰C, with water activity at Aw = 0.995, and atmospheric composition of normal air [7] [8]. High concentrations of carbon dioxide or oxygen can slow the growth of R. oligosporus [8]. High water activity at otherwise optimal conditions can cause growth sensitivity to changes in temperature in R. oligosporus, as can other other abiotic environmental fluctuations. In anaerobic conditions of 99.5% N2 and 0.5% O2, R. oligosporus’ growth at a certain colony diameter is much less in terms of biomass than in aerobic conditions, indicating more resources directed to hyphae growth for scavenging oxygen from the atmosphere rather than growth in mycelial density [8]. The biomass growth rate of R. oligosporus on solid medium has also been determined in a mathematical model [8].

R. oligosporus is a domesticated strain of Rhizopus microsporus and appears to have lost the toxic secondary metabolites rhizoxin and rhizonins A and B present in R. microsporus [1]. However, R. oligosporus can be used for antifungal purposes. In one study, the Chitinase I gene from R. oligosporus was inserted into tobacco plant leaves and the increased production of Chitinase I increased the plant’s antifungal activity [4]. Genetically modifying tobacco plants and other agricultural plants with Chitinase I may be a possible solution to protect agricultural plants from fungal infections. R. oligosporus can also produce an antibacterial protein that inhibits the growth of some Gram-positive bacteria, thus leading to fewer intestinal infections in consumers of tempeh [10].

Current research focuses on characterizing R. oligosporus itself and other members of the Rhizopus genus, in a way that is not directly related to industrial application. One curiosity studied in R. oligosporus is its ability to produce antibiotic and antifungal compounds [10, 4]. In addition, another recent study showed that R. oligosporus, along with the related species R. chinensis, produced no secondary metabolites such as pharmaceutical rhizoxins and highly toxic rhizonins, whereas R. microsporus produced rhizoxins and some strains highly-toxic rhizonins [1]. In another recent study, R. oligosporus was morphologically identified by its high spore irregularity and its sporangiospores’ distinct ornamental patterns via low temperature scanning electron microscopy (SEM) and light microscopy [3]. Morphological features of twenty-seven other members of the R. microsporus and R. oryzae species were examined in this study as well [3].

[3] Jennessen, J., Schnürer, J., Samson, Robert A., and Dijksterhuis, J. 2008. Morphological characteristics of sporangiospores of the tempe fungus Rhizopus oligosporus differentiate it from other taxa of the R. microscopus group. Mycological Research 112: 547–562.