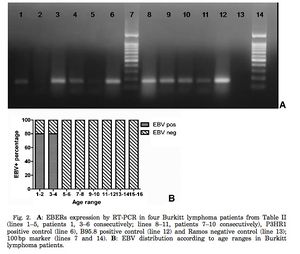 Rhodococcus equi, originally discovered in horses by Magnusson, is a pathogen that is known to be able to affect animals and humans [4]. R. equi is a gram-positive coccobacillus that has the ability of producing a red pigment. It is a non-motile bacteria from the phylum Actinobacteria that is also aerobic and non-sporulating [1]. R. equi is able to utilize carbon efficiently and is therefore important to the recycling of carbon in the soil [5]. Up until 1983, this bacteria was mostly found to infect animals such as horses and foals [1]. Now there are more cases being seen in humans, especially those who are immunocompromised such as patients with AIDS [5]. R. equi generally leads to subacute or chronic bronchopneumonia which can lead to mortality, especially if not treated in the early stages [3] [1]. Infections due to R. equi currently have a mortality rate of approximately 25% [1]. 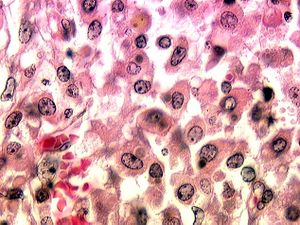 These are stained, cytoplasmic bodies of R. equi within lung tissue. [2

The Rhodococcus equi thrives on volatile organic acids, such as those found in manure [3]. Its cell envelope consists of mycolic acids, polysaccharides, and glycolipids that form around a unique periplasmic space [3]. This envelope is special because it is different from other gram-negative and gram-positive bacteria. It has a strong wall that acts as a barrier for hydrophilc molecules, but contains porins within the cell wall that help bring in the necessary molecules for life [3]. It has been speculated that due to the mycolic acids in the cell wall, R. equi is able to resist many kinds of environmental stresses such as less available oxygen or high acidity [3]. R. equi is able to degrade a wide variety of aromatic and organic compounds [4]. They can survive in the soil for very long periods of time due to their ability to degrade different compounds, including but not limited to pollutants and metals [4]. Rhodococci have a very broad range of metabolic and enzymatic faculties, which cause them to be important to areas of research such as environmental and biotechnologies [4]. Although the catabolic pathways of R. equi have not been researched in depth as of yet, it has mbeen discovered that there are peripheral catabolic pathways that lead to a more specified centralized catabolic pathway or pathways to degrade aromatic substrates [4]. R. equi bacteria produce large plasmids that replicate inside of macrophages in order to proliferate inside of a host [3]. 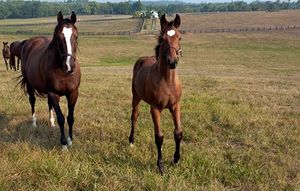 R. equi can thrive in water and soil [2]. They are most often found in areas surrounded by domesticated animals such as pigs and horses, because animal manure contains all of the necessary nutrients and compounds for the bacteria to succeed [2]. This bacteria is able to cause disease because of the virulence of its large plasmid and the affect it has on specific hosts [3]. The plasmids encode genes for Virulence Associated Proteins, such as VapA, which are involved in spreading the infection [3]. The bacteria usually target the lungs, eyes, lymph nodes, and other areas of soft tissue in the body [2]. The patient often presents with a fever, cough, chest pain, weight loss, and dyspnea [1]. These symptoms can also result in pneumonia over time [1]. Alcoholism and diabetes can be aggravating factors [1]. Foals are the most common animal hosts, and immunocompromised patients are the most common human hosts [5]. The key to treating this infection is to catch it early, supply patient with oxygen and ventilation if necessary, and to try to treat any and all factors that might be encouraging the infection to grow [1]. Antibiotics such as glycopeptide, rifampin are currently used to treat patients infected with R. equi [2]. Relapse is common [2]. Research and clinical examinations are currently being done in order to find a more effective cure.

Page authored by Mattie Hogg, student of Mandy Brosnahan, Instructor at the University of Minnesota-Twin Cities, MICB 3301/3303: Biology of Microorganisms.