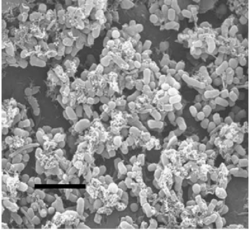 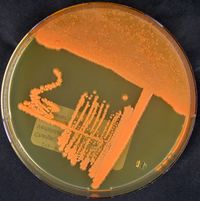 The term Rhodococcus is from the Greek words “rhodon” and “coccus” meaning “rose” and “grain,“ respectively. R. ruber's morphological structure matches the origins of its name: rods and cocci [1]. R. ruber initially forms a branching mycelium that breaks into shorter rods and cocci as it transitions through different growth phases. R. ruber is characteristically a gram positive, non-motile, non-spore forming bacteria [4,7]. It has diverse metabolic and nutritional capabilities depending on the strain, such as utilizing gaseous hydrocarbons, aromatic hydrocarbons, complex polymers, and steroids for carbon and energy sources [1,4,7].

R. ruber is unique in that it is ubiquitous in many different habitats whether that is pristine, contaminated, temperate, or extreme. It is able to persist and tolerate stressful conditions, such as environments with limited oxygen and/or nutrients [1,4,7]. Given its metabolic and habitat versatility, R. ruber is a good prospect for bioremediation and other biotechnological uses to naturally degrade pollutants and remedy contaminated ecosystems [1,4,6].

The genome of Rhodococcus ruber consists of one circular chromosome with an average size of 5.57 Mb [3,11]. The genome size varies for every strain and larger genome sizes can be attributed to the presence of linear or circular plasmids [1,6]. The strains of R. ruber that contain plasmids are YC-TC1, YYL, and R1, which are known to contain additional genes that code metabolic enzymes [6,11]. The average amount of protein coding genes is 4932 and the average G+C content is 70.49% [11]. A high guanine-cytosine content is characteristic of Rhodococcus species which provides DNA stability in varying conditions [1].

The genome sequences of R. ruber are helpful in identifying the genes necessary for metabolic pathways and cycles that R. ruber employs including the tricarboxylic acid cycle, pentose phosphate pathway, glycolysis, and gluconeogenesis [2]. Additionally, the beta oxidation pathway and alkane degradation pathway are utilized to break down more complex xenobiotic compounds before the classic metabolic pathways are used [5]. The genome highlights multiple metabolic gene clusters that are used for degradation of aromatic compounds, steroids, hydrocarbons, and xenobiotic polymers that R. ruber uses for carbon and energy sources. Some strains of R. ruber contain redundant genes which contribute to their versatile metabolic abilities with various nutrient sources [6]. 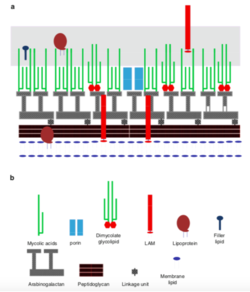 Rhodococcus ruber is a gram positive bacteria that is non-motile and non-spore forming. Key features of its cell structure include its thick peptidoglycan layer, mycolic acids, lipoglycans, and cell envelope lipids [1,4,6]. The mycolic acids of R. ruber are long chain fatty acids with chain lengths ranging from C42-C48, which are much longer than the carbon chains in other Rhodococcus species [4,6]. Its mycolic acids are composed of saturated and unsaturated fatty acids with tuberculostearic acid [1,6]. As with all Rhodococcus species, its cell wall is made up of the carbohydrates arabinose and galactose [1,4,6]. R. ruber's lipoglycans are polysaccharides in the lipoarabinomannan family that are anchored into the membrane [1]. The cell envelope lipids of R. ruber have notable surfactant properties, allowing R. ruber to attach and grow on hydrophobic substrates. Other biomolecules that contribute to R. ruber's hydrophobicity and substrate binding includes its mycolic acids, extracellular polymeric substance, and cell surface proteins [1,8].

R. ruber is an aerobic chemoorganotroph, meaning they use organic compounds as their carbon and energy sources through oxidative metabolic pathways [1]. It is able to utilize gaseous hydrocarbons, aliphatic hydrocarbons, aromatic hydrocarbons, and xenobiotic substances, such as crude oil and plastics [1,4,5,6,10,13]. Additionally, certain strains of R. ruber have unique metabolic abilities, such as R. ruber str. Chol-4 and R. ruber str. C208. R. ruber str. Chol-4 is able to use steroids, such as cholesterol, testosterone, and phytosterols, as their carbon source. In the interest of biotechnological applications, the metabolic activity of R. ruber str. Chol-4 can be used for steroid transformations to active pharmaceuticals [6]. The other strain with unique metabolic abilities is R. ruber str. C208. This strain is able to use inert polymers, such as polyethylene and polystyrene, as its sole carbon source [5,9,10,13]. R. ruber str. C208 utilizes beta oxidation and alkane degradation pathways to break down these polymers [5]. Additionally, it has laccase-coding genes that promote biotic oxidation. Laccases are phenol oxidases that belong to a group of multi-copper enzymes. Studies have shown that the addition of copper in polyethylene cultures improved laccase's oxidizing activity, thereby resulting in increased degradation [9,12]. R. ruber str. C208 has important implications regarding bioremediation efforts. 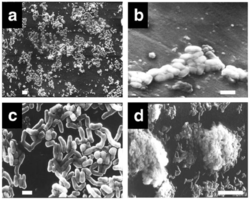 Environmental pollution of plastics and organic compounds are becoming an increasing threat to global biodiversity, natural ecological functions, and global food production [1,9]. Approximately over 300 million tons of plastics are produced annually and the non-biodegradable polymer, polyethylene, makes up up half of that amount [9]. The main source of anthropogenic hydrocarbons are from oil spills and industrial waste deposits [1]. Techniques such as recycling practices and oil spill cleanups are not enough to clear the harmful waste products everywhere. Because of this, a more sustainable method is necessary for future remediation and disposal methods [1,9]. Given Rhodococcus ruber's metabolic diversity to various organic and xenobiotic compounds, it can be a key player in bioremediation efforts to accelerate the degradation of environmental contaminants.

With polymers like polyethylene and polystyrene, R. ruber will form a biofilm [9,10,13]. In an environment starved of carbon source, R. ruber will colonize the surface and reproduce. The polymer acts a substrate and carbon source for R. ruber, allowing it to have greater metabolic activity when it is in a biofilm formation [10,13]. It is able to adhere to the surface through hydrophobic interactions and surfactant properties associated with its cellular structure. After a monolayer is formed, R. ruber continues to proliferate and form multicellular structures that are long lasting and enhance the rate of biodegradation of polymers like polyethylene and polystyrene [9,10,13].

With hydrocarbon pollutants, like crude oil and petroleum, R. ruber is able to use these as carbon and energy sources. It is commonly associated with oil-bearing sites due to its hydrophobic cell surface, and thus, is able to emulsify oil from water sources. This allows it to have profound impacts in oil prospecting and bioremediation efforts through the identification and breakdown of these environmental pollutants. Small-scale field studies have shown the positive effects of R. ruber in contaminated soil and aquatic environments with modified R. ruber treatments, such as liquid biopreparations and biofertilizers [1,9].

[12 | Santo, M.; Weitsman, R.; Sivan, A. The role of the copper-binding enzyme – laccase – in the biodegradation of polyethylene by the actinomycete Rhodococcus ruber. International Biodeterioration & Biodegradation 2013, 84, 204–210.