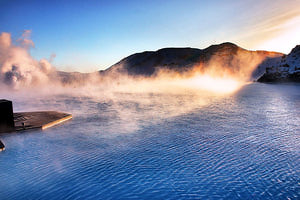 Rhodothermus marinus form reddish-coloured, low convex colonies, 3-4 mm in diameter and with an entire edge. The bacteria also has Gram negative rods about 0.5 µm in diameter and 2-2.5 µm long [2].

Rhodothermus marinus can be found in several similar but distantly located geothermal habitats. Many have large fluctuations in environmental conditions. Temperatures higher than 65 ̊C allow for optimum activity and growth [2]. Shallow water hot springs of Iceland have been a place for studying populations of Rhodothermus marinus. Rhodothermus marinus has also been found in other regions of the world including Portugal, Italy and Monserrat Island in the Caribbean Sea [5].

Most thermophiles that have been studied in the past have been found in deep-sea hydrothermal vents in the Pacific Ocean. The study of Rhodothermus marinus found in shallow-water hot springs in comparison to similar thermophiles found deep in the ocean can bring more understanding to these organisms’ ability to survive in extreme environments.

Based on 16S rRNA sequence, Rhodothermus marinus belongs to the family 'Rhodothermaceae', which has been placed in the phylum Bacteroidete. However, genus Rhodothermus and Salinibacter form a distinct evolutionary lineage. Moreover, the lipid composition of these two genera are significantly different from other members of the phylum Bacteroidetes. Therefore, further work is needed to decide whether these organisms should be retained in that phylum.

Phylogenetic tree highlighting the position of Rhodothermus. marinus strain R-10T relative to S. ruber, the second species within the ‘Rhodothermaceaea’.

The whole genome (3,386,737 bp) includes one main circular chromosome and one circular plasmid. The GC content is 64.3%, and the DNA coding region is about 92.5%. The length of the plasmid is 125 kbp. There are 2,914 protein-coding and 48 RNA genes among the total 2,962 predicted genes. Only 71.6% (2,122) genes were identified with a putative function. However, the other genes are designated as hypothetical proteins. Moreover, there were 51 pseudogenes identified. The genome project is deposited in the Genomes Online Database, and the complete genome sequence in Genebank [9]. Genes for many biotechnologically interesting, carbohydrate metabolism-related enzymes have been reported for strains belonging to the species [1]. A gene transfer system for Rhodothermus marinus has been established [4]. 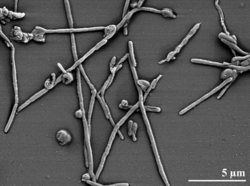 Rhodothermus marinus cells are rod shaped and are 0.5 µm in diameter and 2-2.5 µm long. They are convex, reddish in color, and contain a slime capsule. They are aerobic and halophilic, meaning they require oxygen to generate energy and a high concentration of sodium chloride to grow. The cells are catalase positive and oxidase negative [9]. According to Batista et al, Rhodothermus marinus has a complex I structure, which consists of fourteen subunits. Seven are hydrophilic proteins located in the peripheral arm, the other 7 hydrophobic proteins in the membrane arm. There were many protein and peptide separation strategies. The combination of all of the methodologies allowed the identification of complex I canonical subunits, there was also a possible novel subunit, a PCD (pterin-4[alpha]-carbinolamine dehydratase). PCD possibly plays a regulatory role, though further research needs to be conducted [3].

Rhodothermus marinus is in a group of bacteria that are important degraders of organic matter under aerobic conditions. This bacteria contains all three main groups of enzymes: endocellulase, exocellulase, and beta-glucosidase. Endocellulase and exocellulase degrade cellulose to oligosaccharides and cellobiose. Cellobiose is hydrolyzed to glucose monomers by beta-glucosidase [7]. Most strains use several common sugars, such as glucose, galactose, lactose, maltose, raffinose, and sucrose. Rhodothermus marinus JCM 9785 utilizes several amino acids while other strains are only reported to use aspartate, glutamate, asparagine, and glutamine [8].

Not much is known about the life cycle of Rhodothermus marinus. 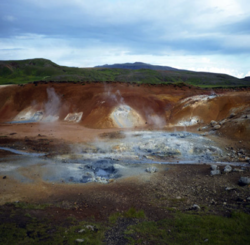 Rhodothermus marinus was first isolated from submarine alkaline freshwater hot springs in Isafjardardjup, Iceland in 1988 and from other geothermal sites in Iceland including coastal springs from a borehole effluent in Oxarfjordur, Iceland, from borehole effluents from a powerplant at the Blue Lagoon, and from a salt factory in Reykjanes, Iceland. It has been isolated from similar habitats in geothermal environments at various regions around the world as well, including Praia de Ribeira Quenta, Ferraria, Sa˜o Miguel in the Azores, Portugal, Stufe di Nerone near Naples, Italy, and on Monserrat island in the Carribean Sea. It should be noted that the populations of Rhodothermus marinus in these geographic locations are genetically distinct. High genetic diversity and low horizontal gene transfer indicate the populations at these geographically distinct sites are evolving independently and indicate that genetic drift and geographic isolation is an important mechanism in species divergence [5]. 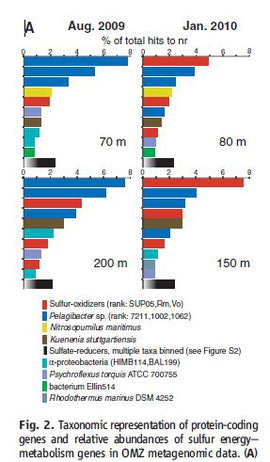 Rhodothermus marinus is a heterotrophic obligate aerobe that is thermophilic and slightly although strictly halophilic. Growth occurs at a temperature range of 54-77 degrees Celsius with optimal growth occurring at 65 degrees Celsius. Rhodotherms marinus also grows at NaCl concentrations optimally at 2% and not above 6%. During osmotic stress and growth at low pH, small amounts of solutes such as formic acid, acetic acid and some alcohols accumulate. Optimum pH for growth is 7.0, with no growth observed below pH 5.0. This species only utilizes a single carbon source, with slight differences in carbon sources between strains. It's physiology dictates a narrow niche for it to occupy; Rhodothermus marinus can only grow close to the openings of hot springs where oxygen is readily available and close to the surface of the water where the temperatures are warm [5]. Not much is known about any symbiotic relationships that Rhodothermus marinus might hold.

The role of this microbe in biogeochemical cycling is ambiguous and still being elucidated. The genome of Rhodothermus marinus was found in a study by Canfield et al. that studied the cryptic sulfur cycle in oxygen-minimum zone (OMZ) waters off the Chilean coast [6]. In the cryptic sulfur cycle, the sulfide that accumulates from sulfate reduction by specialized microbes is immediately re-oxidized by sulfide oxidizing bacteria instead of sulfide reducing bacteria. In non-OMZ waters, sulfide usually accumulates, which is indicative of microbial activity. This process prevents sulfide toxicity and is limited by nitrate reduction in OMZ waters. In non-OMZ waters, marine sediments rich in readily degradable biomass fuel sulfate reduction and drastically increases the production of sulfide which overwhelms the nitrate pool. Nitrogen cycling is a complex process, and certain factors which may have had an influence on this study such as microbial cycling of ammonia in the oxycline, microbial anaerobic ammonia oxidation, and novel mechanisms that microbes employ to cope with sulfide limitation, were neglected. To elucidate this further, Canfield et al. calls for long term seasonal studies [10]. The involvement of Rhodothermus marinus in this cryptic sulfur cycle was not discussed in the paper or in any subsequent literature. It's presence in this environment is puzzling, as it is an obligate aerobe and requires specific factors for growth that may not be met in this environment. Hopefully future studies will elucidate the role of Rhodotherms marinus in nutrient cycling in global oceans.

Rhodothermus marinus may have implications for bioremediation, biotechnology, and bioengineering. Naturally, it decomposes organic matter releasing essential nutrients back into the environment. Being a thermophile, it has many thermostable enzymes, namely polysaccharide hydorlizing and DNA synthesis enzymes, which can be used in research [7]. Other enzymes belonging to Rhodothermus marinus have been found in multiple biochemical pathways. These enzymes are capable of degrading toluene, xylene, DDT, dioxin, naphthalene and aromatic hydrocarbons among others. Other enzymes are capable of synthesizing antibiotics such as streptomycin, penicillin, puromycin, cephalosporin, neomycin and novobiocin [10]. This is important because of the possibility to harness these enzymes in bioremediation efforts and in the production of pharmaceuticals beneficial to human health.