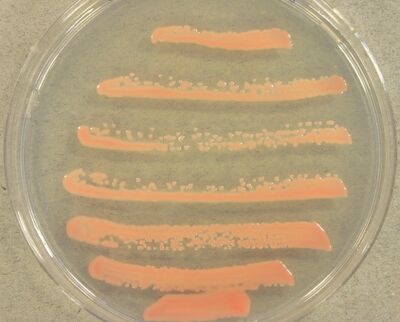 Rhodotorula glutinis, also known as “red yeast” (1), is a species of fungus in the Sporidiobolaceae family that is commonly found in the environment and on human skin (2). It has pink and red colonies due to its ability to produce red-orange carotenoid pigments (3). The species has been the focus of attention in the medical field, as it can persist on plastic surfaces, such as catheters, and potentially cause sepsis in immunocompromised patients (4). Current research focuses on the industrial significance of R. glutinis, including its ability to produce carotenoids, act as a biocatalyst, and aid in biofuel production (3, 5-6). Research suggests that R. glutinis can sustainably produce biofuel precursors from industrial and organic waste, but questions still remain about the cost-effectiveness of large-scale biofuel production utilizing R. glutinis (7, 8).

The Rhodotorula glutinis genome has 20,478,880 nucleotides, and guanine and cytosine (G + C) bases compose 61.9% of the genome. The region of the genome thought to encode genes contains 17,229,291 base pair and there are 3,359 genes coding for 2,817 proteins (9). Some of the major protein groups encoded in the genome play roles in the metabolism of lipids and carotenoids, along with other genes that produce enzymes that are highly relevant to the bio-products and pharmaceutical industries. One example of this is the enzyme phenylalanine ammonia lyase, which can be used to treat phenylketonuria, a disease that is caused by the build-up of the amino acid phenylalanine (10).

Rhodotorula glutinis forms pink or red, smooth, moist, and mucus-like colonies when grown on agar. When fully matured, R. glutinis cells form an elongated sphere, or ellipsoid, and their diameter ranges from three to five micrometers (11). The overall structure and division of the nucleus is similar to other previously reported fungi and yeast. In some strains of R. glutinis, vacuoles are absent in young cells, suggesting they are not permanent structures and instead hold a transient function in the cell. Granular and rod-shaped mitochondria are often present in the cytoplasm (12). The nucleus consists of a central nucleolus surrounded by highly condensed DNA, and is enclosed by a nuclear membrane.

R. glutinis reproduces by simultaneously budding from multiple start points, also known as multipolar budding. Through this method, a smaller version of the yeast cell grows from the original cell. Eventually, the mature daughter cell separates from the mother cell, taking half of the nucleus and resulting in two identical cells (13). R. glutinis can also reproduce sexually through the use of mycelial clamp connections, which form a link between two fungal cells and transfers a nucleus, and with it DNA and genetic material, from one yeast cell to another (13).

Rhodotorula glutinis, like most fungi, is a chemoorganoheterotroph. R. glutinis generates energy through the breakdown of organic molecules with a preference for free monosaccharides and the disaccharides sucrose, trehalose, maltose, cellobiose, and lactose (14). Glucose has been identified as an optimal carbon source for R. glutinis, allowing for rapid growth and high carotenoid production (15). R. glutinis, unlike other well-studied species of yeast, is an aerobic organism that lacks the capacity to perform sugar fermentation (16). Typical of the overwhelming majority of eukaryotic organisms, R. glutinis utilizes the organic molecules NADH and FADH2 as electron carriers and molecular oxygen as a final electron acceptor (17).

Rhodotorula glutinis is able to survive in a large variety of environments. In nature, it can be found in the air, soil, ocean water, and on the surfaces of leaves, and it has the potential to colonize humans and other mammals (18). It can also be found in refrigerated food products, particularly dairy (cheese, yogurt, butter), meats, and vegetables (18). Its optimal growth temperature is 28℃, although it can grow at temperatures both below it (refrigerator, ~4℃) and above it (human body, ~37℃), albeit not as quickly. Its optimal pH is 5.5 - 7.5 (19).

Rhodotorula glutinis is a common component of the human and indoor microbiome, having been isolated from the air, skin, nails, soil, shower curtains, and toothbrushes (20). It also appears to survive well on plastic surfaces and is common in hospitals, with the Rhodotorula genus being the most commonly found yeast genus on the hands of medical workers (2, 21). The genus is resistant to several common antifungal medications, such as fluconazole and caspofungin (22). These qualities make R. glutinis — and the genus as a whole — a concern for immunocompromised patients and those with medical devices that remain in the body, such as catheters or vascular access devices. There have been many documented cases of death and serious illness following R. glutinis infection, such as catheter-related sepsis, keratitis (inflammation of the cornea), meningitis, and fungemia after solid-organ transplantation (23, 24, 25, 26). Of these illnesses, fungemia, or presence of fungal cells in the blood, is most common and causes symptoms such as fever, chills, and malaise (27, 28).

The benefits of Rhodotorula glutinis in various industrial and environmental applications are still being investigated, yet early findings are essential to our understanding of the fungus as well as its potential usage. R. glutinis can use monosodium glutamate (MSG) wastewater as a culture medium, in which it produces an optimal amount of lipids for biofuel use without needing as much oxygen when the proper amount of glucose is present (29). This demonstrates the utility of this fungus as a biofuel producer while simultaneously decreasing [ https://en.wikipedia.org/wiki/Pollutant pollutants] that reduce free oxygen for other organisms to use in the environment through waste runoff. This study also raises questions about what other wastewater products can be used as media to grow R. glutinis, which allows for further reduction of waste.

Current research of Rhodotorula glutinis is primarily focused on the production of biofuels and carotenoids. One study investigated the use of R. glutinis as a producer of biofuel using sugar beet molasses as a substrate in non-sterile conditions. Optimal lipid production occurred in the range of temperatures between 20 and 35° C, resulting in a much greater percentage of 16- and 18-carbon length fatty acid chains] (7). Such 16- and 18-carbon fatty acid chains are key for biofuel production, and its production throughout such a wide range of temperatures makes it easier for production in an industrial setting. Recent studies have also investigated the improvement of carotenoid production through the transformation of R. glutinis with cellulase genes and additional β-carotene production genes. These engineered strains can use organic cellulose material to amplify β-carotene production, introducing a potential application of R. glutinis in the efficient and sustainable breakdown of organic waste (31). Carotenoids are also utilized as antioxidants and are converted into vitamin A by the human body, making them a potential target for the pharmaceutical industry (32).

Rhodotorula glutinis is also shown to produce biofuel in the presence of both industrial and organic waste. One study regarding the use of R. glutinis in a recycling capacity showed that it can produce biofuels and biogas from fruit and vegetable waste. This type of organic waste is generally difficult to break down, yet, the fungus can grow in this material. In doing so, it produces a variety of fatty lipids from waste under the optimal conditions by first breaking it down with heat (6). This study shows the conversion of waste into energy, this time in the form of organic material versus industrial waste. More recent studies have shown significant biofuel production from a newly isolated strain of R. glutinis, T13. Biofuel produced from R. glutinis T13 has a concentration of fatty acids with properties similar to diesel, which makes it a potential competitor (33). More research is needed in order to make waste-treatment and fungus growth cost effective and optimal for biofuel production via R. glutinis.

15. Nam, H.S., J.S. Rhee. 1991. Effect of Carbon Source and Carbon to Nitrogen Ratio on Carotogenesis of Rhodotrula glutinis. Journal of Microbiology and Biotechnology. 1(1): 75-78