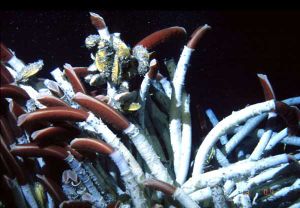 Riftia pachyptila with visible red plume due to hemoglobin NOAA

Characteristics of the bacterial symbiont

The bacterial symbiont of R. pachyptila has not been successfully cultivated apart from its host, therefore standard phenotypic methods of classification have not been applicable. Using DNA-DNA hybridization, the degree of phylogenetic similarity among R. pachyptila bacterial symbionts from widely distanced vent sites has been determined. While the symbiont could not be cultivated from the host, purified R. pachyptila symbiont DNA standards were able to be obtained. This was because the symbiont DNA could be physically separated from R. pachyptila DNA because of its higher G+C content and possession of high-density internal sulfur globules. Standard DNAs obtained were hybridized against trophosome DNAs obtained from distantly separated R.pachyptila individuals, as well as other vestimentiferan genera, to investigate symbiont similarities. The bacterial symbionts from the three vent sites studied were all members of the same bacterial species. The association between the host and symbiont is highly specific. The likely reason for the lack of host differentiation is that there is not enough time for accumulation of mutations to occur because of the rapid extinction and reestablishment of populations given the short lifespan of hydrothermal vents. Therefore the lack of genetic diversification observed in the host should extend to the symbiont [1].

The circulatory system includes a pump located in the vestimentum region that promotes blood circulation in the entire body, including to the trophosome cells which bring nutrients to the bacterium. The plume is rich with blood, which can be visualized by the red color of the plume. The circulatory system mediates all metabolite exchanges between R. pachyptila and the surrounding water [6][7].R. pachyptila are adapted to their volcanic deep sea environment and use its composition, which include carbon, nitrogen, oxygen, and sulfur, in metabolic pathways that rely on the symbiotic relationship with the bacterium. The R. pachyptila hemoglobin is the transporter of both oxygen and sulfide to the bacterium which produce metabolic energy for both itself and R. pachyptila [8].

Nutrition in R. pachyptila depends on the bacterial symbiont to fixate carbon dioxide using energy derived from the oxidation of reduced sulfur compounds. The bacterial symbiont oxidizes sulfide into sulfite by an electron transport system, which eventually results in the production of ATP that can be used by the symbiont for the assimilation of carbon.

R.pachyptila absorb carbon dioxide produced by the surrounding hydrothermal vents using its brachial plume. Once absorbed, carbon dioxide can be used in many ways. Carbon dioxide can be transported by the circulatory system to the trophosome where bacteria are located. In addition, carboxylation in the plume results in malate, which can be transported immediately to the trophosome by blood circulation [9]. In the bacteria, the carbon dioxide from the plume provided either by the environment or as a result from the decarboxylation of the transported malate enters the Calvin-Benson cycle and serves as a precursor for different small organic metabolites. These metabolites, such as as ribulose-1,5-biphosphate and ribulose-5-phosphate, can be delivered to the different tissues of R. pachyptila for its own metabolism and ATP production [10].

Arginine carboxylase and ornithine decarboxylase have key roles in the synthesis of polyamines for the R. pachyptila cell tissue. Polyamines are involved in membrane stability and growth. R. pachyptila cannot utilize arginine metabolism because it lacks key enzymes and therefore must rely on the bacterial symbiont. Putrescine, the product of polyamine degradation, can serve as an alternative source of inorganic carbon and nitrogen for R. pachyptila [13].

Simultaneous acquisition of sulfide and oxygen occurs in R. pachyptila because of a biochemical adaptation. Sulfide typically interacts to inhibit oxygen-binding on hemoglobin,, however, the multi-hemoglobin complex synthesized by R. pachyptila reversibly binds sulfide independent of oxygen. Sulfide, primarily as hydrogen sulfide, and oxygen can then be transported by the R. pachyptila circulatory system to the trophosome for use by the bacterial symbiont [6][7]. 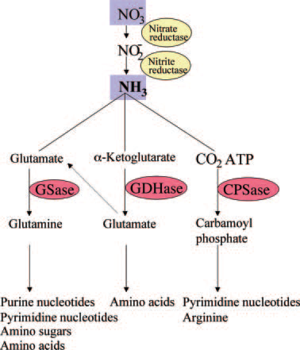 Nitrate reductase, the bacterial enzyme which mediates the reduction of nitrate to nitrite, has been detected in R. pachyptila, indicating a role for nitrate reduction in the assimilatory pathway by which nitrate is ultimately converted to ammonia for use in both R. pachyptila and symbiont biomass synthesis [14].