Role of the Lux Operon in Bioluminescence 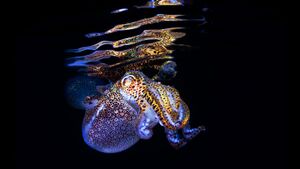 The relationship that exists between the Hawaiian Bobtail Squid and its bacterial partner Vibrio fischeri is mutually beneficial, as the glowing bacteria are provided with shelter inside of the squid’s light organ, and the squid uses the bacterium’s bioluminescent properties as camouflage. The nocturnal Hawaiian Bobtail Squid emits downward light from its light organ and adjusts the intensity of its glow to match that of the moonlight. This effectively eliminates the squid’s shadow, which in turn makes it less visible to any potential predators.[1]

Quorum Sensing and the Microbiome 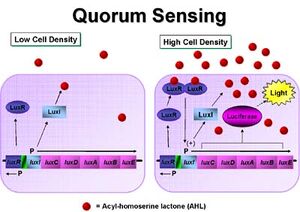 Quorum sensing is a chemical signaling mechanism that cells use to communicate with one another. In V. fischeri, the behavior of the bacteria can be altered based on the population density of these cells. Each cell produces autoinducers, or molecules used for signaling, and releases them into the environment. When the intracellular concentration of autoinducers reaches a set threshold, cells will respond. These responses typically involve a change in gene expression, and can result in an entire population of cells exhibiting a particular behavior at the same time. As a result, a high population density of cells can trigger processes such as those that produce antibiotics, biofilms, and bioluminescence.[2]

The dynamic between Vibrio fischeri and the Hawaiian Bobtail Squid has long been a well-recognized symbiotic relationship. In fact, quorum sensing was discovered while scientists were studying the symbiosis that exists between V. fischeri and E. scolopes. Part of this relationship requires the ability to bioluminesce at night, but to stop glowing during the day to best camouflage the squid from predators. This on/off switch is possible due to variations in the concentration of Acyl-homoserine lactone, also known as AHL. Since AHL acts as a transcription factor for the lux operon, when it is present in higher concentrations, the entire operon is transcribed. The opposite is also true; when AHL concentration is low, the operon is not transcribed, and no gene products are created.

During the day, the squid expels some of the bacteria from its light organ, which keeps the concentration of AHL low. These low levels of AHL mean that the lux operon is not transcribed, the gene products (which include the light-producing luciferase enzyme) are not produced, and no light is emitted from the squid. As the day goes on, V. fischeri begins to colonize inside of the light organ once again, allowing AHL levels to slowly increase in preparation for night. After the sun has set, the high concentration of AHL causes all of the genes in the operon to be transcribed, producing luciferase and the molecules required for the light-producing reaction.[3]


Genetics of the Lux Operon 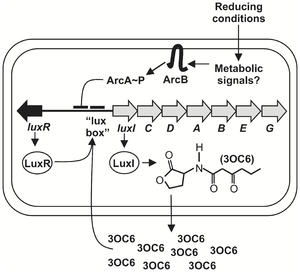 Artistic rendering of the lux operon and the genes it contains. Source: Coordination of the Arc Regulatory System and Pheromone-Mediated Positive Feedback in Controlling the Vibrio fischeri lux Operon[3].

The lux operon itself is composed of a series of genes, named as shown in the image to the right. The lux box serves as a bidirectional promoter, allowing the genes on either side of it to be transcribed. The operon also contains a bidirectional termination site on the luxG gene that consists of a hairpin loop that begins with a poly-A region and ends with a poly-T tail.[4]

The mechanism that allows the Hawaiian Bobtail Squid to glow at night but not during the day is a result of the expression of a specific gene within the genome of V. fischeri. In order to glow, abundant AHL molecules bind to the transcription factor luxR, which regulates gene expression of the operon. The newly bound complex moves and binds to the lux box, changing the secondary structure of the complex. This change allows the RNA polymerase to stay on the gene and transcribe all of the genes contained in the operon. The genes luxA and luxB produce the alpha and beta subunits of the luciferase enzyme, respectively. 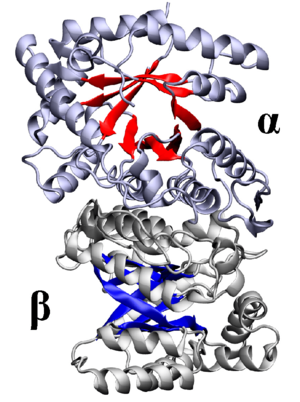 3D rendering of the structure of the bacterial luciferase enzyme. Source: Palette of Luciferases: Natural Biotools for New Applications in Biomedicine[4].

Conversely, during the day, low levels of AHL within the squid’s light organ cause RNA polymerase to bind to the promoter, transcribing luxR. Then, RNA polymerase binds to the other promoter and transcribes the luxI gene, producing LuxI as a result. LuxI binds to the substrate to catalyze the production of AHL, then RNA polymerase falls off of the DNA strand. This means that AHL is produced constitutively, allowing the levels of AHL to increase until the bioluminescent properties of the bacteria become useful to the squid after dark, and the squid begins to glow again.

Auto-bioluminescence isn’t exclusive to Vibrio fischeri. Other bacteria in the same family possess similar bioluminescent abilities, which can even be engineered in other organisms, including human cells. Although difficult to achieve, the chemistry of human cell cultures can be altered to glow through the use of a two vector lux expression system, which was previously thought to be impossible.[5]

The chemical reaction that allows the luciferase enzyme to produce light is as follows:

The lux operon is a perfect model system to exemplify how gene clusters and a promoter can create nontraditional products from nucleotide base sequences. This mechanism not only reveals a potential way in which operons can function, but it also presents an example of one of the many ways in which symbiotic relationships can evolve and exist together, as the Hawaiian Bobtail Squid and Vibrio fischeri bacteria depend on one another to survive. The relationship between these two organisms is also one that clearly communicates the power that quorum sensing can have within a microbial community by demonstrating the potential magnitude of the system’s products and their effects.