A Microbial Biorealm page on the genus SM1 Euryarchaeon 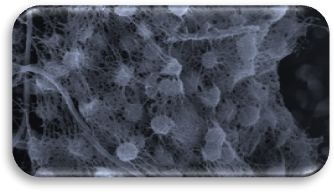 Sm1 Euryarchaeon is a coccoid, archaea species surrounded by a unique matrix of complex appendages. The unique appendages consist of exterior proteins that are called ‘hami’ (hamus singular) that act as hooks to form strands between the microbes. The colonies are slimy, white, and strung together, being described as being ‘pearl-like.’(1)

Found in sulfuric springs near Regensburg, Bavaria, Germany. The springs where the microbe survives consist of cold temperatures and low salinity levels.

The importance of this microbe comes from the fact that it is one of few naturally occurring archaeal microbes. This helps extend our current knowledge of the biological and ecological significance of Achaea. Furthermore, having a sulfate-reducing metabolism, the SM1 Euryarchaeon can be used as a focus for biotechnical research relating to waste water treatment.

The microbe’s genome is 3Mbp long. The content of the genome is 35 mol% G + C combinations. Research of its 16S rRNA shows that the microbe has no close cultivated or uncultivated relatives.(3)

SM1 Euryarchaeon is a gram-positive, small caccoid microbe ranging from 0.4 – 1.0 um in diameter. The cells are believed to have an additional polysaccharide matrix component due to an electron-dense corona surrounding the cell. The internal pH range of the cell is between 7.0 – 7.5 while the optimal pH environmental conditions can range from a pH of 5 – 9. The cells optimum growth temperature ranges from approximately -2OC – 20OC, with the absolute optimum growth temperature being 10O C.

The cell wall is sensitive to SDS, EDTA and Proteinase K treatments. However, they do not exhibit fluorescence for methanogens nor do they contain coenzyme F420 as was expected from researchers. (1)

Also, surrounding the cell is the dense web-like hami. Each cell has approximately 50 -100 hami per a cell. Studies have revealed the structure of the hami to be broken down into two main parts: hook-region and prickle-region. Each fiber is approximately 1-3 um in length. This structure entangles each cell to its neighbor and allows for uniform distance between cells. 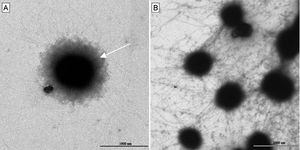 (A) Single cell with hami and arrow showing the electron-dense exterior of the cell. (B) Several cells entangled in the web of hami.(1)

The colony structure is set up in a 3-dimensional arrangement. Each cell is spaced approximately 4um from each of its neighbors. The microbes form micro-colonies in which 3 – 20 cells will be present. This arrangement allows water to travel through gaps between the cells. The micro-colonies (connected by more hami) combine into the larger colonies that can be as large as 3mm, appear as tiny, white pearls strung together. 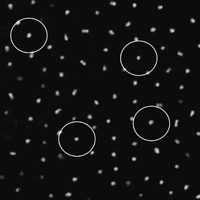 Micrograph of a layer of SM1 Euryarchaeon that shows the uniform distance (~4um) and three dimensional arrangement of the cells. (1)

SM1 Euryarchaeon is an anaerobic microbe, except with a possible symbiotic or syntrophic relationship with Thiothrix sp. that can surround the SM1 Euryarchaeon colonies. The microbe is also sulfate-reducer.

This is the first Achaean to be a naturally occurring ‘mono-species’ in a biofilm. An average SM1 Euryarchaeon makes up 95% – 98% of visable biofilms. This means it strongly outcompetes other bacteria in the environment which could be due to a more efficient absorption and utilization of nutrients in the environment, possible inhibition qualities due to archaecines, or just on extreme vitality and growth rate. SM1 Euryarchaeon also requires a specific relationship in oxygenic surface waters with Thiothrix sipK4 and IMBI E-proteobacterium. The relationship is believed to be syntrophic but symbiosis is possible with the SM1 Euryarchaeon producing energy through a sulfur cycle and having a nutrient exchange in single colonies.