A Microbial Biorealm page on the genus Scardovia wiggsiae 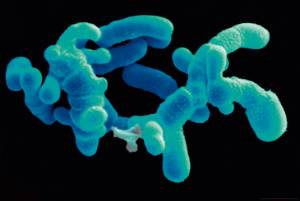 Scardovia wiggsiae is a Gram-positive bacillus found in oral cavities and thought to be a causative agent for early childhood dental caries, also known as bottle rot. This is significant because previously, the most commonly thought cause of early childhood caries has been Streptococcus mutans[1]. This new pathogen, S. wiggsiae, has been discovered in children who have tooth decay, but where S. mutans has been absent in their oral culture. Early childhood caries is one of the most common infectious diseases in childhood[1].

S. wiggsiae is a non-motile, non-spore forming bacillus, and measures 0.6–0.7 μm wide and 1.6–4 μm long. The cells arrange singularly or in pairs, some even colonize in short chains. The shape of the cells can vary in response to fluctuating conditions of the environment and can range from straight to slightly curved. Cell color can differ from off-white, cream or gray[3].

Being gram-positive, S. wiggsiae has a thick peptidoglycan layer that is composed of A4α L-Lys–Ser–Glu in the peptide linkage, although L-ornithine, to some extent, replaces L-lysine and threonine partially replaces serine[3].

S. wiggsiae can ferment various sugars, including glucose, sucrose, and galactose, without the production of gas[3]. The bacterium is acidogenic, aciduric, and acid tolerant[1]. It is an anaerobe and does not produce indole, catalase or H2S. S. wiggsiae cannot hydrolyze urea or gelatin, nor does it reduce nitrogen[3].

Scardovia wiggsiae has been isolated in the oral cavity which contains its own microhabitats to include the teeth, gums, tongue and palate among others[4]. Since active dental lesions are found to in acidic environments, it is worth noting that this bacterium is acid-tolerant and can grow on acid agar plates with a pH of 5[1]. A strain of S. wiggsiae has also been found in an arm wound of an intravenous drug user[3]. It is mesophilic, preferring a temperature range of 25 – 45°C[5].

This microorganism causes human disease in the form of early childhood dental caries (ECC). One of the most common causes of early childhood caries is believed to be Streptococcus mutans, however, studies have shown that Scardovia wiggsiae is more strongly linked to severe cases of ECC than S. mutans[6]. It is also possible that the combination of S. mutans and S. wiggsiae together increase the susceptibility for caries. This chronic disease can bring about severe pain, infection, hospitalization and in some cases, death[7]. Dental caries results from interactions between acidogenic bacteria and typically a carbohydrate substrate, though the susceptibility of the host plays a factor as well, with disadvantaged ethnic and socioeconomic groups having higher incidence of caries[1]. S. wiggsiae is one of the major species detected in children with ECC and is less found in children without dental caries[1]. This species has also been detected in adults who have advanced stages of carious dental lesions[1]. Probiotics may prove to be a good treatment since those with higher amounts of Bifidobacterium or Lactobacillus isolated from their oral cavities have less incidences of tooth decay[8].