A Microbial Biorealm page on the genus Serratia liquefaciens 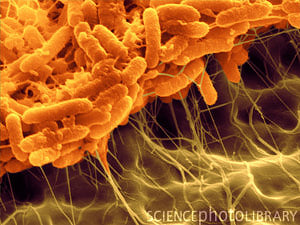 S. liquefaciens is a straight rod shaped bacterium with a diameter of 0.5-0.8 μm, a length of 0.9-2.0 μm, and is Gram negative. Serratia species are usually motile and contain peritrichous flagella. [2]

S. liquefaciens are facultative anaerobes making oxygen inessential to survival. They can inhabit both aerobic and anaerobic environments. Thus, S. liquefaciens is a widespread bacteria found in the environment and capable of colonizing on soil, water, plants, and the digestive tracts of rodents, insects, fish, and humans.[3] However, it must be noted that S. liquefaciens is not a normal component of human fecal flora. [4]

Following the genus change, little can be found regarding S. liquefaciens. However, current research is taking place on its mechanisms and pathogenic affects. Thus far, it has been proven to have certain antifungal properties in a plant’s rhizosphere. [6] It is also a pathogenic bacterium that has been associated with severe nosocomial infections.

Limited information can be found on the genome of Serratia liquefaciens. The entire genome has not been sequenced so the complete size and contents of the genome are unknown along with number of chromosomes. Several partial sequences of 16S ribosomal RNA have been analyzed and are indicated as linear strands.[7] [8] [9] However, the close relative S. marcescens has a single circular chromosome that is signature to many bacterial species. [10] It has also been proven that some bacteria may have multiple circular chromosomes or linear chromosomes and linear plasmids.[11]

Serratia liquefaciens has a straight rod structure that is Gram negative. Gram negative organisms have a thinner layer of peptidoglycan surrounded by an inner and outer membrane. Serratia species are usually motile and have peritrichous flagella.

S. liquefaciens is able to ferment glucose and other carbohydrates (i.e. sucrose, D-mannose,D- mannitol, maltose, salicin, and trehalose) as a source of carbon while producing acid as a byproduct. S. liquefaciens also utilizes lysine, ornithine, and hydrolyzes gelatin, as a source of carbon and energy for growth. It can also hydrolyze DNA and reduce nitrate to nitrite –which may be a byproduct of anaerobic respiration.[12]

S. liquefaciens is commonly found on many plant species and more specifically in the rhizosphere. A rhizosphere is a 1mm area of soil that surrounds the root of a plant and is teeming with biological and chemical activity. The biological makeup is influenced by the specific root where a symbiotic relationship forms. The root releases water soluble compounds into the rhizosphere that provides the microorganisms with nutrients. [13] Meanwhile, the microorganisms will benefit the plant in a variety of ways. Serratia species – including S. liquefaciens - are known to have antifungal properties that benefit oilseed rape. The antifungal properties of the genus produce antibiotics, siderophores, and lytic enzymes like chitinase. Furthermore, S. liquefaciens is specifically linked to protecting carnation rhizospheres from root cutting.[14]

The Serratia genus, as a whole, is responsible for about 2% of nosocomial infections; most of which are attributed to S. marcescens. They tend to colonize in respiratory and urinary tracts of adults.[15] In 1950, the genus Serratia was thought to be harmless. A study by the United States Army wished to determine the possible effects that biological warfare may have on the United States. Therefore, about 117 square miles of the San Francisco area was sprayed with an aerosol of S. marcescens. After approximately 800,000 people were exposed, a resulting epidemic of serratia-related pneumonia hit the area, killing many people. Although the intentions of the Army were not to cause harm the the population, the pathogenic effects of Serratia were then discovered. [16]

Since the tragedy of 1950, more exploration into the pathogenic effects of Serratia have been documented. There are many different symptoms and infections that may arise from S. liquefaciens exposure. While some strains are non-pathogenic, others cause urinary tract infections, bloodstream infections, sepsis, pneumonia, meningocephalitis, and other debilitating infections - sometimes even death.[17] It is relatively rare for S. liquefaciens outbreaks to occur; and when they do they are often associated with nosocomial infections due to poor hygiene. In a three month span during 1999, eight patients at a hospital were diagnosed with S. liquefaciens infections. After investigation took place, the infection was attributed to non-sterile equipment used to calibrate machinery. Investigations also yielded improper hand washing, and multiple uses of heparin and insulin vials. The infections were successfully treated with antibiotics. [18]

While many other investigations of poor hygiene have resulted from S. liquefaciens infections, they are not all as easily treated. In an investigation following infection after a Vitamin C infusion, research indicated poor hygiene as a cause for the nosocomial infection. After receiving the transfusion the patient complained of neck pain, fever, and vomiting. However, overnight she was taken to the emergency room with septic shock, meningism, and loss of consciousness. Once admitted to the ICU, the patient was comatose with a weakened pulse. After further complications arose, the patient was finally dismissed from the hospital after 68 days of treatment to continue therapy at a rehabilitation center. The fatality rate is about 75% for S. liquefaciens sepsis.[19]

Now that the pathogenic effects of the Serratia species are becoming more widely known, researchers are turning their attention to the antibiotic resistance of S. liquefaciens. 41 strains of the S. liquefaciens complex have been identified and their susceptibility to 70 different antibiotics was recorded. All species in the Serratia genus were naturally resistant to at least fifteen different antibiotic strains. This information is very helpful when treating bacterial infections. Studies also mapped the antibiotics that the species is most susceptible to as well. This had never been done prior to the last decade even though the danger of Serratia has been known since the 1950’s. It has also been discovered that all of the species of S. liquefaciens complex are actually involved in human infections. [20]

Research is also being done to determine exactly how Serratia liquefaciens infections have been spreading – particularly in the sense of epidemics. While it is known that a wide variety of clinical manifestations have occurred over the past couple of years, the particular sources of infection are difficult to identify. A main mode of transmission is the contamination of hospital staff hands with patients acting as reservoirs for infection. However, since there are so many resistant strains of S. liquefaciens it is important to know exactly how the infections are spread in order to control nosocomial epidemics. It is already known that infections usually harbor in the respiratory tract. However, it was confirmed that the majority of patients had lung colonization. This is not the only mode of transmission; the bacterial presence has also been confirmed in blood cultures. The most frequent mode of transmission is via throat and fecal carriage. However, nasal and urinary carriage is prevalent in 31% and 22% of the cases examined. Also,fecal carriage is associated more with pediatric patients than adults. The confirmation that patients are reservoirs for infection increased the importance of hand washing techniques since hands are a likely mode of transmission. Due to this information, it can be difficult to eradicate a S. liquefaciens infection. This stresses the importance of planning infection control programs and researching the best ways to limit the passage of infection while carefully monitoring antibiotic dispersal due to the high resistance found in some strains.[21]

A very different type of research regarding quorum sensing and biofilms is being initiated. As indicated, S. liquefaciens is an opportunistic pathogen that inhabits a wide variety of habitats. A specific stain of the bacteria, strain MG1, can differentiate into various specialized cells with the ability to move rapidly on certain surfaces. This rapid surface motility allows the MG1 stain to swarm to a specific area of colonization. Quorum sensing plays an important role in the congregation of the S. liquefaciens bacteria. In the colony, a biofilm is formed in about 72 hours. It has been indicated that biofilm formation is a genetically encoded phenomenon that can only occur on a surface and not in fluids. What makes S. liquefaciens biofilms of particular interest is the morphological variation found within one bacteria's biofilm. More studies are being performed to better understand the differentiations in bacterial biofilms and the genetic mechanisms behind their formation. It has been indicated that the presence of a biofilm may be a defense mechanism against predation from protozoa. Studies indicate that cells of a certain size are more resistant to protozoans and packing together may have the same effect. [22]