Shewanella putrefaciens is a bacteria that is found mainly in marine environments. It is a gram negative bacteria, meaning it does not dye during gram staining, which usually indicates a stronger antibiotic resistance. It is also a facultative anaerobe, meaning it can undergo aerobic respiration when oxygen is present, and can reduce iron and magnesium metabolically. Because of this Shewanella putrefaciens can reduce Uranium and create uranium deposits (fredrickson). Sheweanella putrefaciens grows quickly on both solid and liquid media and is recognizable for its pink color. Shewanella putrefaciens was first isolated from dairy products in 1931 by Derby and Hammer. It is classified as an Achromobacter and later named by MacDonell and Colwell in 1985 (McNair). 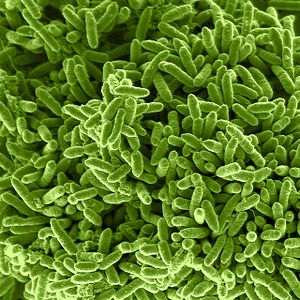 Shewanella putrefaciens can be found in freshwater, brackish, and salt water ecosystems. Many healthy marines animals are contaminated with Shewanella putrefaciens only to have it be realized when food caught by seafood industries spoils due to the bacterias presence. In freshwater animals, and in particular fish species of trout, the bacteria has been shown to cause disease. The effect of the bacteria is seen through external lesions and visible bacterial colonies. Fatality from Shewanella Putrefaciens usually only occurs if the fish are already in poor health, under environmental stress or a whole body inner infection occurs that impedes organ function (Fisheries). Most research done on Shewanella putrefaciens in relation to marine life concentrates on the prevention of bacterial outbreaks in fisheries. Much of the problem in prevention comes from Shewanella's tendency to become a contaminant or saprophyte, meaning it is often found living among other bacterial infections on previously damaged organs, as well as the bacteria's ability to survive at extreme low temperatures and respiratory diversity (Hau). These things combined make the bacteria hard to detect until after the death of an organism, and hard to kill without the use of antibiotics. Shewanella putrefaciens is also known to cause the rotting smell associated with dead fish because of its production of trimethylamines (McNair) 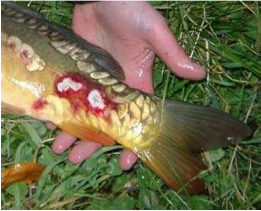 Open lesion of Shewanella putrefaciens on a carp taken by Environment Agency, UK.

Shewanella putrefaciens as a humans pathogen is very rare. If it does effect human health it is typically only seen to show effects in combination eith other bacterial infections such as E.coli, pneumonia, and streptococcus. Infections form Shewanella putrfaciens mainly occur in soft tissue such as skin, intra-abdominal areas, or in the blood (Pagani) (McNair).