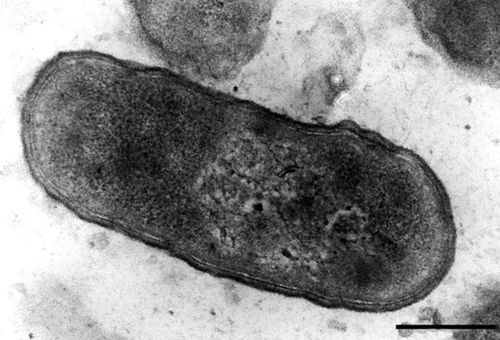 S. alvi wkB2 is a core member of the western honey bee ( Apis mellifera ) worker gut microbiota [7]. The cells are short gram negative rods. On agar, S. alvi wkB2 forms smooth white round colonies [4]. It is a is non-motile biofilm former colonizing the ileum of A. mellifera [4].

Snodgrassella was so named in honor of Robert Evans Snodgrass who was a prominent figure studying insect physiology and had described Apis mellifera [6]. alvi refers to the latin word "alvus" which refers to the bowels or to bees [6]. The strain was described by Waldon Kwong who's initials are "w.k."

Initially, the name "Candidatus" was added to the front of Snodgrassella alvi because its discovery was through gene sequencing and had not been cultivated yet [6]. 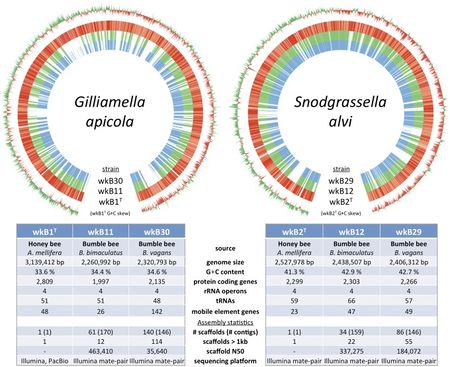 A few notable annotated gene functions include genes that code for many pathogen associated functions. One gene codes for nonribosomal peptide synthesis of siderophores and one that codes for type 6 secretion system (T6SS) [3]. 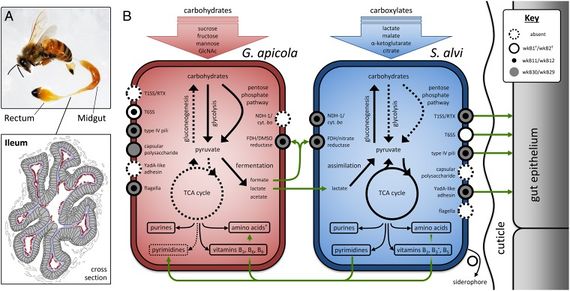 A TCA cycle enzyme, succinyl-CoA synthetase, which catalyzes the interconversion of succinyl-CoA and succinate, is not present in S. alvi yet the pathway is considered to still be functional as no alternative pathways exist to bypass the TCA cycle [3].

S. alvi is able to synthesize purine and pyrimidine nucleotides as well as all 21 proteinogenic amino acids (except selenocysteine). Vitamin B2 and B6 can be synthesized. S. alvi wkB2 specifically can synthesize B3 and its derivatives (NAD+ and NADP+) from aspartate [3].

Evidence has been found suggesting that S. alvi was able to take up and break down carbohydrates, but has since lost that ability [3]. The Glycolosis pathway, Pentose phosphate pathway, & Entner-Doudoroff pathway have all lost essential enzymes [3]. These pathways are typically used to convert sugars to pyruvate.

S. alvi wkB2 lives its entire natural life within the gut of A. mellifera worker bees. Cultivation of S. alvi wkB2 in vivo needs no substrate or assistance outside of the bee's regular diet. It is primarily passed on through the fecal-oral route but can also be passed on from surfaces or bee socialization [6]. 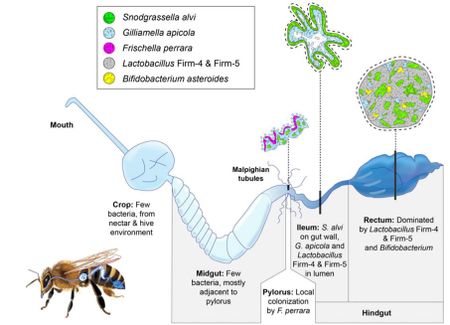 Figure 4: The composition of the typical adult worker bee based on 16S rRNA gene amplicons from whole guts. The localization was determined based on fluorescence in situ hybridization and qPCR studeies. S. alvi is shown in green [5].

Within the bee gut, S. alvi wkB2 plays a vital role in O2 consumption keeping the gut of the bee anaerobic [5]. S. alvi wkB2 is also a primary biofilm former, forming a layer around the ileum which can be seen in figure 4 [5].

For A. mellifera two pests that have been attributed to the large decline in honey bee populations are, the Varroa mite (Varroa destructor) and the Deformed Wing Virus (DWV) [2].

A transformed S. alvi wkB2 cells using RNAi have been proposed as a solution to the decreasing honey bee population [2]. It has been shown that these synthetic S. alvi wkB2 cells can sucessfully colonize A. mellifera in the same part of the ileum that it usually occupies [2][5].


This engineered microbe was transformed with a plasmid coding for double stranded RNA (dsRNA) targeting an essential mRNA on the deformed wing virus which plagues the western honey bee [2]. Leonard et al. were able to show an increase in bee survival for bees incoulated with the DWV and had sucessful colonizations of transformed S. alvi wkB2 cells [2].In another experiment, S. alvi wkB2 was transformed with a plasmid which coded for dsRNA which targeted 14 essential Varroa mite genes. They were also able to show a decrease in survival rates for the Varroa mites feeding on these bees [2].

Synthetically engineered S. alvi wkB2 after further testing and ethical consideration may be able to be implemented in the environment as a solution to protect the decreasing bee population.

[4] Kwong, W. and Moran, N., 2012. Cultivation and characterization of the gut symbionts of honey bees and bumble bees: description of Snodgrassella alvi gen. nov., sp. nov., a member of the family Neisseriaceae of the Betaproteobacteria, and Gilliamella apicola gen. nov., sp. nov., a member of Orbaceae fam. nov., Orbales ord. nov., a sister taxon to the order 'Enterobacteriales' of the Gammaproteobacteria. INTERNATIONAL JOURNAL OF SYSTEMATIC AND EVOLUTIONARY MICROBIOLOGY, 63(Pt 6), pp.2008-2018.