In late 2013, the Federal Drug Administration approved two new non-interferon antiviral drugs to treat Hepatitis C, Gilead's Sovaldi (sofosbuvir) and Johnson and Johnson's Olysio (simeprevir). In test trials involving 197 patients who were not responsive to interferon, the paired administration of Sovaldi and Olysio was shown to clear 90 percent of the Hepatitis C virus [1]. These two novel drugs will be important in the next few years for curing patients with Hepatitis C, especially if costs can be brought down. 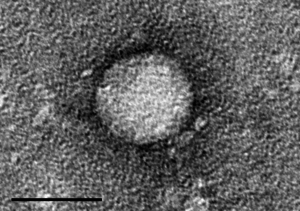 Electron micrograph of hepatitis C virus purified from cell culture, with 50nm scale bar. Distributed by the Center for the Study of Hepatitis C, The Rockefeller University. 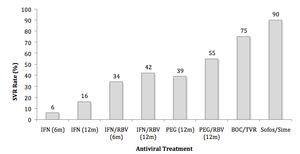 Figure 2. SVR rates for patients with HCV infections (genotypes 1-3) according to the treatment regimens and duration. Adapted from Strader and Seeff (2012) with addition of “Sofos/Sime” SVR rates from clinical trial COSMOS. 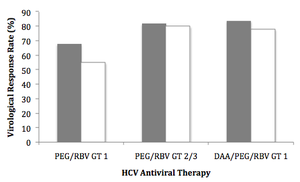 Figure 3. End-of-treatment (grey) and SVR (white) rates for treatment-naïve patients with genotype 1 or 2/3 HCV infections who received PEG therapy versus DAAs (boceprevir and teleprevir) therapy. Adapted from Strader and Seeff (2012).

For an in-depth introduction to the Hepatitis C Virus, please refer to Wilson's MicrobeWiki page on Telaprevir.

Hepatitis C is a viral disease that leads to inflammation of the liver, and is part of the Hepatitis virus family, Flaviviridae, of which hepatitis A and hepatitis B are the most well known. Chronic hepatitis C virus (HCV) infection leads to scarring of the liver and cirrhosis, which a significantly heightened chance of liver failure and/or liver cancer. While HCV occurs only in human and chimpanzees, it is a highly transmissible virus that occurs through blood contact often in medical, hard labor intensive, sexual intercourse and intravenous drug use settings. Hepatitis C infections are predominantly treated with a medication cocktail consisting of peginterferon and ribavirin, which have a success rate of 50% but often induces multiple side effects such as flu-like symptoms, anemia and depression [2].

Chronic hepatitis B was found to be effectively treated by interferon (IFN) based therapies in the 1960s, and these same drugs were used to treat non-A, non-B (NANB) hepatitis in the mid-1970s [3]. The group of hepatitis viruses causes inflammation of the liver, often leading to cirrhosis and cancer if untreated. Identified in 1989 and renamed from NANB, the hepatitis C virus (HCV) has also been known to infect and cause damage to the digestive system, the lymphatic system, the immune system and the brain [4]. An estimated 150 million people are chronically infected with HCV worldwide, with the blood-borne RNA virus manifesting into six unique, non-interchangeable genotypes across geographies. For 80% of people infected with HCV, the virus is not cleared by the body’s immune system within the first 6 months and chronic infection occurs [4].

In 1986, a National Institutes of Health (NIH) pilot study used recombinant IFN to treat NANB/HCV [3]. A combination of interferon and ribavirin, which was found to lower alanine amino transferase levels but not HCV RNA levels, raised the sustained virological response (SVR) to 42% after 48 weeks (Fig. 2) [5]. When people attain SVR, they remain aviremic for decades after, and so researchers and clinicians use SVR as a marker for curing people of HCV. Long-acting pegylated interferon (PEG) was introduced and prescribed with ribavirin to achieve a 55% SVR rate in the early 2000s, where Genotype 2/3 patients were more responsive to the therapy and their treatment was ended in 24 weeks while Genotype 1 patients required treatment for 48 weeks [6].

Protein inhibitors telaprevir and boceprevir were the first direct-acting antivirals (DAAs) developed; they inhibit the nonstructural 3/4A protease of HCV genotype 1 and are used in combination with PEG and ribavirin in order to prevent resistance mutations [7]. In 2012, the virological response rates hovered around 80% for patients with HCV genotype 1-3 using a combinatown of PEG, ribavirin and/or protein inhibitor DAAs (Fig. 2) [3]. HCV is a single plus-strand RNA virus with a 9.6 kb genome and one open reading frame that encodes 3 structural and 7 nonstructural (NS) proteins [9] (Fig. 4). Many HCV drugs are coupled with ribavirin because it is a nucleoside analog that inhibits viral replication [2]. The major DAA classes include nucleotide viral NS5B RNA polymerase inhibitors, non-nucleotide viral NS5B RNA polymerase inhibitors, NS3/4a protease inhibitors and NS5A viral replication complex inhibitors and have varying success rates depending on HCV genotype, low barriers to resistance, and result in a wide range of side effects [2]. Interferon also induces multiple side effects including fever/chills, muscle and body aches, headaches, fatigue, depression, anxiety, irratibility, insomnia, mouth ulcers, poor appetite, nausea and vomiting, diarrhea, dehydration, cough, rashes, hair thinning/loss, and reactions at the injection site [8]. As such, researchers sought to develop a non-interferon based HCV antiviral regimen that could be orally-taken, achieve SVR at 12 weeks (short-term), have high barriers to resistance, are better tolerated, and tackle multiple HCV genotypes with a special focus on GT 1, which is the most prevalent and the most difficult to treat variant.

With these goals in mind, two new drugs were developed by Gilead and Janssen/Johnson and Johnson and approved by the FDA in late 2013: sofosbuvir (Gilead: Sovaldi) and simeprevir (Janssen: Olysio) [2]. Faldaprevir is also being developed by Boehringer-Ingelheim and is currently in Phase III trials but this page will focus on sofosbuvir and simeprevir. 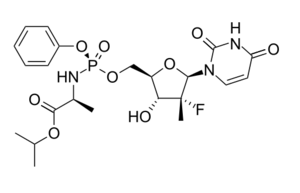 The first nucleotide (‘nuc’) polymerase inhibitor, sofosbuvir is administered orally, has been effective against all identified HCV genotypes (pangenotypic), and has a high barrier to resistance [10]. Also known as GS-7977, sofosbuvir is a prodrug of 2’-F-2’-C-methyluridine monophosphate that acts as a chain terminator at NS5B [11]. Lam et al. (2012) identified sofosbuvir’s mechanism of action at the active conserved site of RNA polymerase NS5B, which is critical for HCV replication, across GT 1a, 1b, 2a, 2b, and 3a [9]. Sofosbuvir is especially potent when coupled with NS5A inhibitors. In a phase II study with GT2/3 patients, a 12-week regiment of sofosbuvir and ribavirin led to SVR in 100% of treatment naïve patients (n=10) and 68% of treatment experienced patients (n=25) [10]. Additional clinical trials involving sofosbuvir will be discussed below.

FISSION (Edward Gane, MD): 499 treatment-naïve patients with HCV genotypes 2/3 were randomly assigned to either 12-week sofosbuvir (400mg daily)/ribavirin (1,100mg daily) treatment or 24-week standard PEG(180mg weekly)/ribavirin (800mg daily) and stratified by HCV genotype, HCV RNA level (< or ≥ 106IU/mL), and presence of cirrhosis. SVR rates were significantly higher in patients with HCV GT 2 receiving the sofosbuvir/ribavirin than the standard therapy (97% v. 78%), and in patients with GT 2 and liver cirrhosis (91% v. 62%). Sofosbuvir/ribavirin was found to induce a more rapid response rate, no resistance was detected in any of the patients who failed the trial, and was associated with significantly fewer side effects including fatigue, headache, anemia, neutropenia and thrombocytopenia [10].

FUSION (David Nelson, MD): 201 treatment-experienced patients (who failed interferon-based therapy) with HCV genotypes 2/3 were randomly assigned to either 16-week sofosbuvir/ribavirin treatment or 12-week active treatment with a 4-week placebo at the end and stratified by genotype and presence of cirrhosis. Patients receiving the 16 week treatment had significantly higher SVR rates compared with the 12 week treatment (73% v. 50%), with the longer duration therapy resulting in SVR rates for GT 2 patients at 94% and 62% for GT 3 patients. As in FISSION, researchers found that viral suppression was rapid, no mutations for resistance, and relatively mild side effects compared to current therapies [10]. 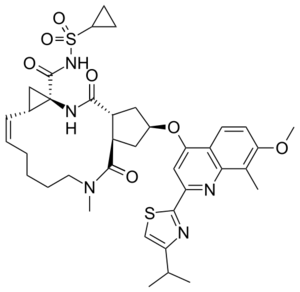 Simeprevir is a HCV NS3/4A protease inhibitor that blocks protein synthesis. It can be administered once daily in a capsule form and has been tested in combination with PEG and ribavirin, and in combination with non-interferon direct-acting antivirals. Clinical trials involving simeprevir will also be discussed.

QUEST-1 (Ira M. Jacobson, MD and Vincent Astor, MD): 394 treatment-naïve patients with HCV genotype 1 were assigned to either PEG+ribavirin with simeprevir (150mg) for 12-weeks or with placebo for 12-weeks. SVR was achieved at Week 12 for 80% of patients in the simprevir over the placebo (50%). Patients in the former trial also reported less fatigue [10].

PROMISE (Lawitz et al. 2013): 393 Genotype 1 HCV patients who are treatment-experienced (relapsed after IFN-based therapy) were assigned to either PEG+ribavirin with simeprevir (150mg) for 12 weeks or with placebo. Authors noted that simeprevir has been tolerated by approximately 3,800 patients to date in May 2013. Significant number of people treated with simeprevir and PEG+ribavirin achieved SVR in 12 weeks (79.2%) 12

COSMOS (Ira M. Jacobson, MD): Two cohort study comparing the SVR rates of 12-week sofosburir (400mg)/simeprevir (150mg) treatment with and without ribavirin (1100mg). 80 treatment-experienced (interferon null responders) genotype 1 patients with absent to moderate fibrosis in Cohort 1 were compared to 87 treatment-naïve and null responder genotype type 1 patients with advanced fibrosis or compensated cirrhosis in Cohort 2. In both cohorts and with both treatments (with or without ribavirin), SVR rates at 12 weeks were above 90%. Treatment was generally safe and tolerated, and the most common side effects were fatigue, headache, nausea and insomnia. [13]

Rapid, sustained responses are brought on by sofosburir and simeprevir when used in combination with IFN and IFN-free, and ribavirin and ribavirin-fre, treatments in response to hepatitis C infection. However, the costs of these two drugs are astronomical and priced out of the ranges of people in the U.S. and abroad. Further investigation needs to be conducted in order to make off-brand versions of these two drugs that are reasonably priced. While these drugs are critical to elimination and cure of hepatitis C, the politics and economics of pharmaceutical patenting make this a harder goal despite the existence of technology to do so.