A Microbial Biorealm page on the genus Spirillum 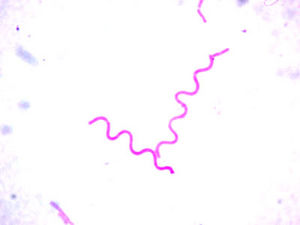 Spirillum bacteria are thought to have been first described by van Leeuwenhoek in the 1670s and later by Muller. S. volutans is a large bacterium as well as an obligate microaerophile with a helical structure.

No Spirillum bacterial genomes have been sequenced or studied in extensive detail.

Spirillum bacteria are large chemotrophic spirilla 1.4 to 1.7 micrometers in diameter and up to 60 micrometers in length, with anywhere from less than one to five helical turns. They have rigid helical cell structure as opposed to the flexible cell structure of spirochetes. The body shape has been refered to as a coccoid body shape, but has been said to be similar to the microcyst body shape although the bacterium has no relationship to the microcysts formed by myxobacteria. They characteristic crescent-shaped bipolar facicles of flagella that assist them in their movement by rotating at high speeds, "forming oriented cones of revolution that reverse their configuration during reversal of swimming direction" (Krieg 1976). Although the cells possess more than one flagella, they are located in tufts on the cell where the individual flagella aggregate into a single fascicle that looks like a single flagellum during ordinary staining. The bacteria contain "volutin" granules composed of poly-beta-hydroxybutyrate (PHB) rather than polyphosphate, which is what the term "volutin" has come to mean. They have a strictly respiratory type of metabolism and are microaerophilic: they need an atmosphere of 1 to 9% oxygen for growth. Although catalase activity is weak, positive reactions were found for the oxidase and phosphatase tests. The bacterium also cannot reduce nitrates and therefore cannot grow anaerobically using nitrate; it does not oxidize nor ferment carbohydrates. It has not been known to go through hydrolysis of casein, gelatin, starch, or esculin. Apparently the bacteria's growth is unusually inhibited in peptone-succinate-salts (PSS) broth due to the low concentrations of phosphate. (Krieg 1976)

S. volutans has been found in the water of a cooling tower of a sugar-beet refinery in England and from water of a polluted pond. It is thought that the bacterium can be found in many bodies of stagnant water. 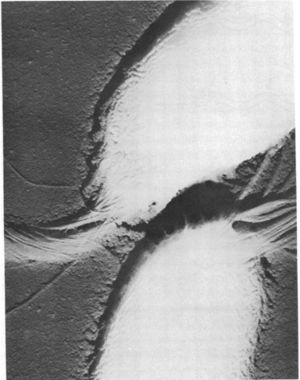 The ends of two cells of Spirillum volutans displaying the polar flagellar fascicles. From Krieg.

As was mentioned above, Spirillum bacteria possess bipolar tufts of flagella. Although they were first thought to be singular flagella, they were found later to be fascicles of multiple aggregated flagella. It has been suggested that the "neutralization of electrical charges is responsible for the aggregation of individual flagella" due to an experiment in which the flagellar fascicles were no longer visible when the cell was washed in distilled water and visible again when as low as 0.001 M NaCl or other salts were added (Krieg 1976). Because Spirillum bacteria are large spirilla, they have the typical spirilla flagella long wavelength of over 3 micrometers and usually less than one full wave (this is in contrast to at least one large spirillum and those of medium or small diameter have flagella with several waves and a short wavelength). The fascicles are also very large and have about 75 individual flagella, each separately inserted into the cell and thus individually moving. Instead of being corkscrew shaped or helically curved, the are crescent shaped in a single plane. In 1919, Metzner described the movement of the front fascicle to be rotating in the form of a "wide bell opened toward the back," while the rear fascicle rotated in the form of a "wide goblet opened away from the end of the cell" (Krieg 1976). The mechanical effect of this flagellar movement is to rotate the cell body in a direction opposite to that of the flagella. The helical nature of the cell therefore causes a corkscrew-type movement. An interesting point is that an observer looking at S. volutans from the side would see both both polar fascicles rotating in the same direction. However, if that person was located inside the cell looking from one pole to the other, the direction of the apparent rotation of one polar fascicle would be opposite that of the other (Krieg 1976).