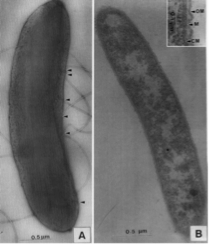 Sporomusa silvacetica was first discovered in the late 1990s in Geisberger Forest in east-central Germany. Kuhner and his team isolated the bacteria from a sample of drained forest soil. Like all bacteria belonging to the genus Sporomusa, Sporomusa silvacetica has curvy rod shaped cells and produces spherical shaped spores. The approximate cell size was measured as 3.5 by 0.7 µm. The bacterial cells are motile by means of a flagellum for propulsion, which is located on the concave side of the cell. Sporomusa silvacetica has a multilayered cell wall, however the individual layers that make up the cell wall are not very thick. A Type c cytochrome was detected in the membrane, which was significant in determining the species. Consequently, Gram staining causes the bacteria to stain weakly Gram-positive[3].

This genome has not been sequenced, therefore the protein coding and other operations of the genome are speculative. 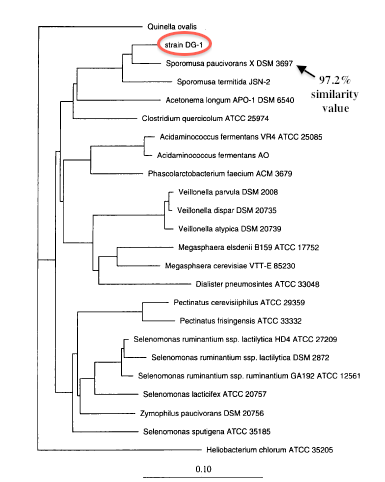 A dendrogram based on the 16s rDNA analysis shows the hierarchical clustering of Sporomusa[3].

A type b cytochrome was detected in the membrane[3]. This complex is a part of the respiratory chain complex III and is involved in electron transport to create a proton motive force to generate ATP for necessary biological functions. This was helpful in determining the species of Sporomusa silvacetica because this type of cytochrome is a trait characteristic of other Sporomusa species, including both Sporomusa paucivorans and Sporomusa termitida[1]. Of the Sporomusa clade, Sporomusa paucivorans and Sporomusa termitida had similarity values of 97.2% and 95.9% when compared to Sporomusa silvacetica[3], most likely due to the similar type b cytochrome, the low-G+C count, and other cell structure similarities. 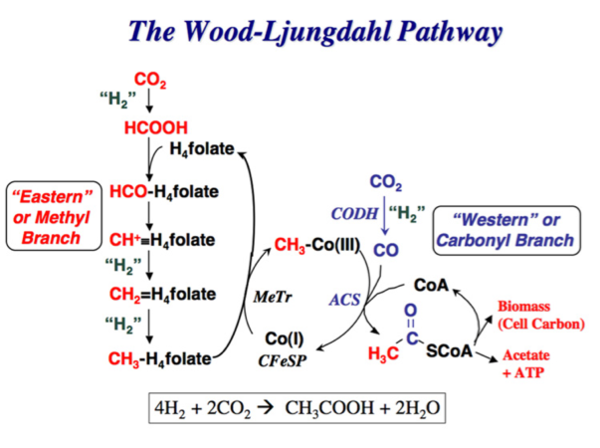 A diagram showing how the Wood-Ljungdahl Pathway produces cellular carbon, acetate and ATP from CO2 and H2[5].‎

When Sporomusa silvacetica grow in the presence of H2-CO2, the Wood-Ljungdahl Pathway is utilized within the cell[5]. This pathway is also called the acetyl-coenzyme A pathway. CO2 is converted into either cellular carbon, or acetate and ATP. Carbon first enters the pathway at the CO2 reduction step and uses H2 as the electron donor. It is then reduced to carbon monoxide. Acetyl–CoA is produced by condensing a methyl group with carbon monoxide using coenzyme A (CoA). Acetyl-CoA is then used to either make cellular carbon, or is converted into acetyl phosphate. Acetyl phosphate's phosphate group is transferred to ADP in order to make ATP and acetate for the cell[5].